Jesse Walker | From the November 2017 issue 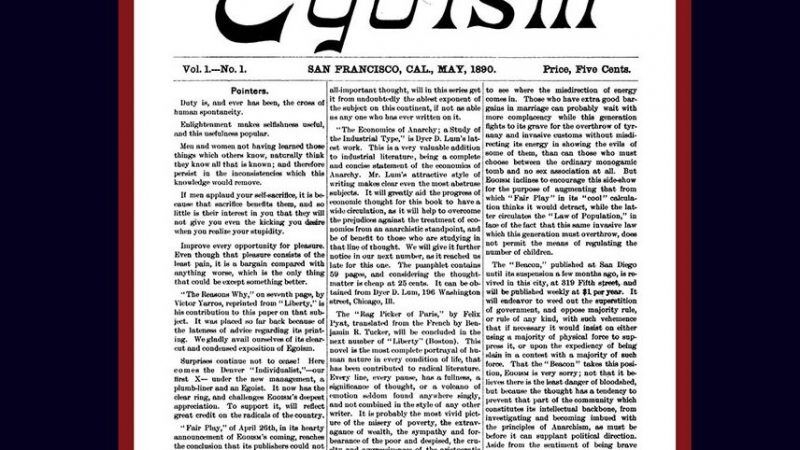 The most famous individualist anarchist journal of 19th century America was Liberty, edited by the fiery polemicist Benjamin Tucker. But Liberty wasn't the movement's only periodical, and anyone interested in that period of libertarian history should welcome any chance to examine the outlets edited by figures with different sensibilities. So it's good to see Georgia and Henry Replogle's journal Egoism reprinted in a hefty new book, Egoism: The First Two Volumes, 1890–1892 (Union of Egoists).

In some ways Tucker and the Replogles were peas in a pod: Each mixed the radical egoism of Max Stirner with the monetary schemes of Pierre-Joseph Proudhon. But there are differences here too, with Egoism putting a stronger stress on feminism and free love. Neither Replogle was as talented a writer as Tucker, and the range of contributors here isn't as large as Tucker's stable. But if Egoism wasn't ultimately as good a publication as Liberty, it's still interesting in its own right.

Some introductory material provides historical context for the journal, including the entertaining tale of the editors' brief stay in the town of Liberal, Missouri. Founded as an alleged haven for free thought by George Walser, a man who hoped to ban both churches and saloons from his city, Liberal attracted and then repelled the Replogles, who were driven out for espousing free love. Walser later converted to spiritualism, and in time the town would host vast conventions of people hoping to speak with the dead.