All Local Politics Are Stupid (In Part Because They're National)

The dreary New York Voter Guide is a festival of anti-Trump show-offery and a failure to recognize what the offices and jurisdictions entail. 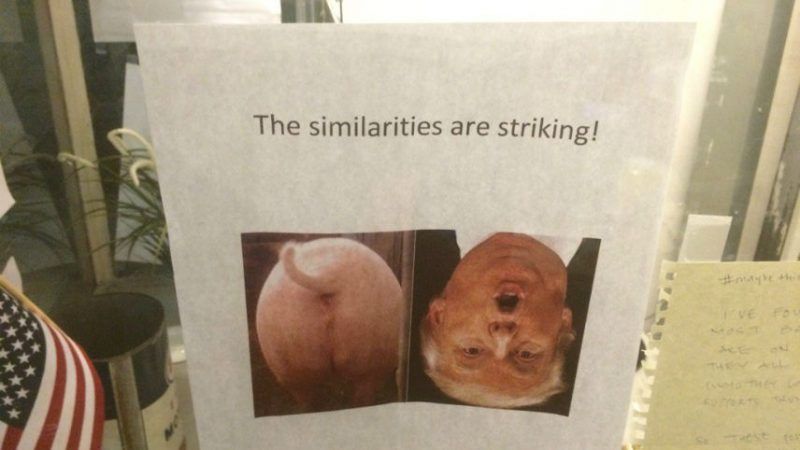 When I first started covering politics three decades ago, one of the go-to campaign slogans you'd see on protest banners and bumper stickers was "Think Global, Act Local." It was an environmental pitch, to be sure, but there was a Serenity Prayer-style division-of-labor insight encoded as well: You might be motivated by your desire to combat apartheid/forestall nuclear war/stick it to Ronnie Ray-Gun, but you'll have a much greater likelihood of impacting current events on the board of the Isla Vista Recreation & Parks District.

If we were to update that graying motto in 2017, it might read "Think National, Act Stupid"—at least judging by the New York General Election Voter Guide, which plopped into my mailbox late last week like a sack of wet cardboard. The nonpartisan pamphlet, presented as a cheerful paean to civic involvement, is instead a festival of bad policy ideas frequently untethered to the job descriptions or even jurisdictions of the offices under competition.

"We've got to do more to make sure working families can afford to live in New York—and that means focusing on housing costs and the quality of our public schools, and creating more good-paying jobs," writes New York City's incumbent, uh, comptroller. (To the surprise of no one, Democrat/Working Families candidate Scott Stringer believes that the best way to create those good-paying jobs is to adopt a $15 minimum wage, a policy that has produced opposite results elsewhere.)

No more gov't subsidies for financial corporations! Let's have the gov't start a bank! pic.twitter.com/RlVwe0C1ct

The more popular play among candidates is to transfer your anger about national politics to whatever position you may be running for. Conservative Party Public Advocate candidate Michael O'Reilly, for example, has a notably ambitious agenda:

Running in just one city. pic.twitter.com/314moUW4oh

In an even grander gesture, Green Party mayoral candidate Akeem Browder lists as his third most important issue, "Children, how we view them." Though Browder does get some creativity points, on capitalization grounds if nothing else, for the first sentence of his platform: "Every problem in New York has an inherent problem and that problem is New York's stance on allowing the Department of Justice to have a hand in Our every aspect of living."

Browder's Reform Party counterpart, Sal Albanese, is a bit more down to earth: "As Mayor, I promise to ride mass transit, at least sometimes, so that I can personally experience what's happening." Since there are so many colorful-sounding New York political parties and ballot lines (Smart Cities, Stop de Blasio, Dump the Mayor, etc.), I hereby call dibs on the At Least Sometimes slate.

In one-party fiefdoms such as New York, the marginalized competition can sometimes feel pretty marginal. And by that I do mean the Republicans:

It mostly does not get better. Brian-Christopher Cunningham, the Reform Party's man for City Council District 40, lists his current occupation as "N/A," and certainly did not waste any campaign money on editing help: "I am running for the New York City Council because in the last ten years I have seen first hand the residence in my district see over development and an 80 increasing in the cost of their rents," is the first sentence of Cunningham's platform.

But perhaps most drearily of all, even the slickest local pols know where the votes are in 2017, and that's in baiting the sitting U.S. president. My own City Councilman, Democrat/Working Families candidate Brad Lander (District 39), begins his voter-guide entry like so: "NYC must lead the way in standing up to Trump Administration bigotry, injustice & corruption." Sure, there are real-world policy responses to Trump's attempted crackdown on sanctuary cities, for example, but I suspect the more meaningful data point here is the number 86: That's how many percentage points Hillary Clinton beat Donald Trump by in Lander's district.

Lander, who is running unopposed (I intend to write in area resident Jim Epstein), is actually a diligent sort on local issues, if a bit on the Elizabeth Warren side of things, and he always performs admirably at little community ceremonies and so forth. But his post-election pivot to the #Resistance veers too often into a mirror image of Trumpian divisiveness for my taste:

POLL: Which one are Senate Republicans doing the worst damage to?

I prefer my City Council representative to be working locally, not trash-talking nationally to take advantage of local political antipathies https://t.co/l8CVBBkZhj

1. I prefer the US Senate to have serious debate before they take health care from 20+ million Americans (incl. many of my constituents).

The depressing thing about all this is that Lander is responding logically to the incentives around him. I've chatted about the anti-Trumpification of local politics with two senior New York Democrats in various green rooms, and their responses were the same: Hey, that's what you've gotta do these days.

While there will always be a sliver of the population passionate about such important local issues as zoning along the rehabilitating Gowanus canal, most politics as publicly expressed these past 11 months have been about the hated orange man in the White House. That picture to your right was in the shop window of a residential real estate company on the busiest commercial thouroughfare in my neighborhood. (Here's another lovely one.) This is the type of area where you can take anti-Trump yoga classes, and see fliers in shop windows at toddler level with messages like this:

Ask your parents if they like Trump or support him in any way. Then, if they say they do, remind them that it's not right to lie, cheat, mislead and be a racist and that if they continue thinking that way they cannot ask you to not lie, cheat, mislead [or] be racist either.

The more we fetishize politics and power at the presidential level, the more our local communities become not refuges away from the Beltway din, but comfort zones of voter blocs aligned either for or against the faraway emperor. It's not a healthy trend.

Oh well, at least I have a couple of candidates I'll vote for enthusiastically next week. Borough President Ben Kissel, come on down!