U.S. Withdrawal From UNESCO Is a Good Start

The Trump administration should look at America's participation in other U.N. offshoots too. 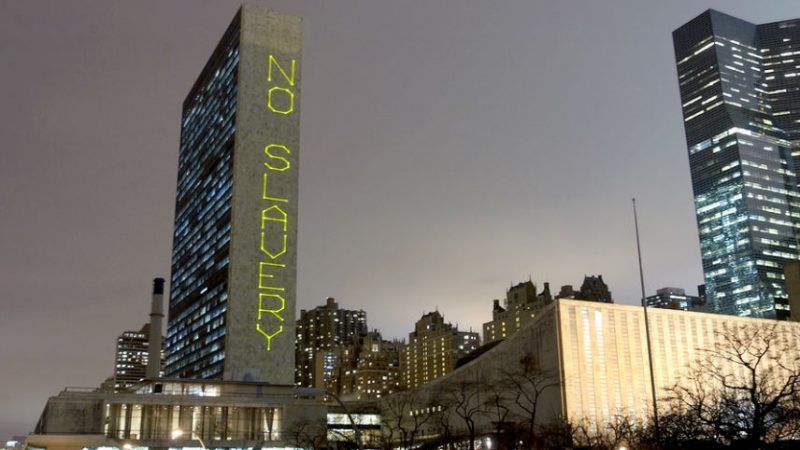 The Trump administration announced earlier this month that the United States will be leaving the United Nations Educational, Scientific and Cultural Organization (UNESCO) at the end of 2018.

The United States previously withdrew from UNESCO in 1984, because of "corruption" and what it saw as the organization's "ideological tilt toward the Soviet Union [and] against the West." George W. Bush, in his wisdom, reversed Ronald Reagan's decision in 2002.

The State Department has long complained about the organization's anti-Israeli bias and the U.S. stopped paying America's membership fee after UNESCO admitted Palestine as an independent member in 2011.

The stated causes of the United States decision to withdraw aside, it is difficult not to marvel at the goings on at the United Nations, and the U.S. should look at other U.N. organizations to exit.

The U.N. Human Rights Council, for example, currently includes Qatar, which imposes the death penalty for such crimes as apostasy and adultery and flogging for alcohol consumption. Venezuela, which censors its press, and tortures and kills its political prisoners, is on the council. So is China, which does not permit basic human freedoms, including those of religion, speech and assembly, and occupies Tibet. Rwanda, which kills the ruling regime's opponents at home and abroad, is in, and so is Saudi Arabia, a medieval kingdom that, among countless other transgressions against civilized norms of behavior, beheads homosexuals.

And then there's the World Health Organization, which last week appointed the 93-year-old Zimbabwean dictator, Robert Mugabe, as its "goodwill ambassador." Dr. Tedros Adhanom Ghebreyesus, the Ethiopian director-general of the organization, has previously praised Zimbabwe for "its commitment to public health" and said that Zimbabwe "was a country that "places universal health coverage and health promotion at the center of its policies to provide healthcare to all."

After a public outcry, Adhanon rescinded Mugabe's appointment. That said, let's ponder the WHO action for a moment, since, in the long line up of the world's most destructive leaders, Mugabe surely belongs to the top five.

First, consider the gaping abyss between the rhetoric of universal health coverage and the reality of life in many countries. Critics of the U.S. healthcare system often point to some God-forsaken nation that claims to "provide healthcare to all." The American left has for decades lauded Cuba as an example of a free and universal healthcare system for its citizens, ignoring that country's ramshackle hospitals, primitive medical instruments, lack of basic medicines, phlegmatic staff, dirty linen, and lack of food. Michael Moore even made a Goebbelesque propaganda movie about it.

Second, consider the actual legacy of Mugabe's rule on the health of ordinary Zimbabweans. There are, of course, many examples to choose from, but the following is pertinent for it involves the well-fed and handsomely remunerated invertebrates who stalk the hallways of the United Nations and staff the organization's many offices throughout the world.

In 2005, the Mugabe government nationalized Zimbabwe's water supply, then quickly ran out of money to treat the water and maintain the infrastructure. The government ended up shutting down the water supply altogether and people had to drink from ponds and sewers. In 2008, cholera broke out. The United Nations stepped in to help the cash-strapped country, but moved at a glacial pace.

The government's official line, after all, was that there was "no cholera" in Zimbabwe. Georges Tadonki, who headed the U.N. Office for the Coordination of Humanitarian Affairs in Harare, noted that the United Nations "didn't want to anger the host government, which was trying to convince the world in general and Africa in particular that all was well in Zimbabwe."

Agostinho Zacarias, who headed the overall U.N. mission in Zimbabwe, refused to give the go-ahead for anti-cholera measures for four months, which was crucial, for "cholera is highly contagious, has an incubation period between one and two days and can kill soon afterwards." By the time the United Nations finally intervened, I wrote at the time, there were already "over 4,000 deaths, more than 100,000 people sick of cholera and millions [of] people affected directly or indirectly not only in Zimbabwe, but also in neighboring South Africa, Zambia, and Mozambique."

The United Nations is a sick organization and the Trump administration would be fully justified to look at America's participation in its other offshoots, well beyond the hapless UNESCO.