And it's already contentious. 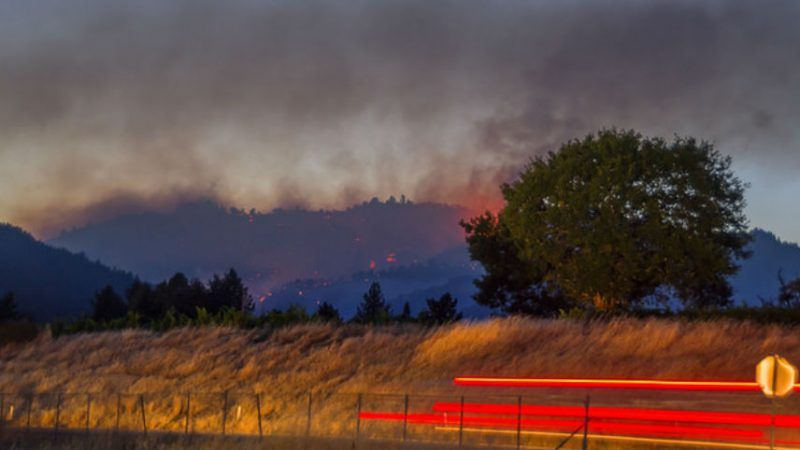 In the days before Facebook and other social media, it was a matter of course to wait a few days after tragedies strike before making political and policy points about the latest event. We always need to show compassion for the suffering—and wait until more of the facts roll in before getting up on that soapbox.

At the OC Register, we used to refer to the late editorial writer Alan Bock as "Reverend Bock" because he was so good at offering condolences rather than lectures. But, ultimately, it's the role of opinion writers to provide constructive policy advice after destructive events. We see this following the Las Vegas massacre this month, where gun availability became an understandable topic, and after recent hurricanes, where relief efforts received scrutiny.

Now, it's time to think about wildfires. It's hard not to think about them in northern and Southern California. My house is 80 miles from Napa Valley, yet the air is thick with smoke. Thousands of people have been evacuated from their homes. At least 41 people have died and hundreds are missing as 16 fires engulf more than 160,000 acres in a heavily urbanized area. More than 3,500 homes and businesses have been destroyed, including wineries.

This is terribly sad. Anything one says about other people's misery comes across as inadequate or trite, but we should have heavy hearts for what our fellow Californians are going through. Wildfires are, of course, a regular occurrence. The fields and woods typically are dry this time of year. It gets windy. Power lines fall. Wildfires spread like, well, wildfire.

What should we learn for next time?

The debate already is contentious. "Climate change is lengthening the fire season in the West," the San Jose Mercury News argued. "Congress and Western state legislatures should be amping up prevention—just as we strengthen dams to help prevent flooding." The newspaper also pointed to (and downplayed) conservative arguments in favor of more logging, which could "reduce the severity of fires."

Those are important discussions, but involve broad topics of climate policy, land-use regulations and federal budgetary priorities. I'm more focused on the concerns on the ground. In particular, there's been talk about the state having too few firefighters and insufficient resources. For instance, news reports suggest that instead of working 24-hours on and then having 24 hours off, firefighters are working nonstop and getting little sleep. We're increasingly dependent on firefighters from other states.

Like all budgets, firefighting ones are limited, wherever the wildfire-fighting funds come from. And public-safety budgets are consuming the bulk of municipal spending these days. Most of that has to do with pay and benefit levels.

The median total compensation cost for a California firefighter ranges from $145,000 for state agencies to more than $196,000 in cities and counties, according to some estimates. Firefighters can earn $300,000 in overtime. The base salaries may be relatively modest, but overtime, pension obligations (firefighters typically retire at age 50 with 90 percent or more of their final year's pay) and other benefits drive these costs into the stratosphere.

Furthermore, California has some of the highest firefighting costs in the nation. That largely has to do with our dry climate and geography, with vast wilderness areas abutting massive population centers. But this shortfall also is because of the salary structure and pension system, with the way governments spend their existing resources. There's a reason that thousands of applicants may line up for a small number of firefighting openings. Those pay packages are hard to fathom considering that a majority of the nation's firefighters do this work on a volunteer basis.

This may be a difficult time to discuss the compensation of firefighters. Firefighting isn't one of the more dangerous professions according to the U.S. Bureau of Labor Statistics. Loggers, fishers, pilots, roofers, refuse workers, iron and steel workers, drivers, farmers, power-line workers and groundskeepers top the list. But there's no question firefighting can be a very dangerous job, and we're all appreciative of the dangers firefighters are enduring now.

Nevertheless, this is a simple math problem. If fire officials spend unnecessarily high amounts on existing workers, they have less money to hire more people. There could be far more firefighters available to fight disastrous fires if overly generous pension payments didn't consume such a large portion of local budgets.

A new study from Stanford University's Institute for Economic Policy Research found that public-employer pension contributions have soared by 400 percent over 15 years even though operating budgets have not grown nearly that much. This "crowds out" public services. That means that the state government and municipalities can higher fewer employees, which means fewer firefighters, also.

As deadly fires rage, this might not be the easiest time to discuss this, but we need to face the obvious. One of the best ways to prepare for future wildfires is for the state to get its pension and compensation systems under control.

This column first appeared in the Orange County Register.