The agency's administrator, Scott Pruitt, simply followed the law and allowed a company to submit a proposal. 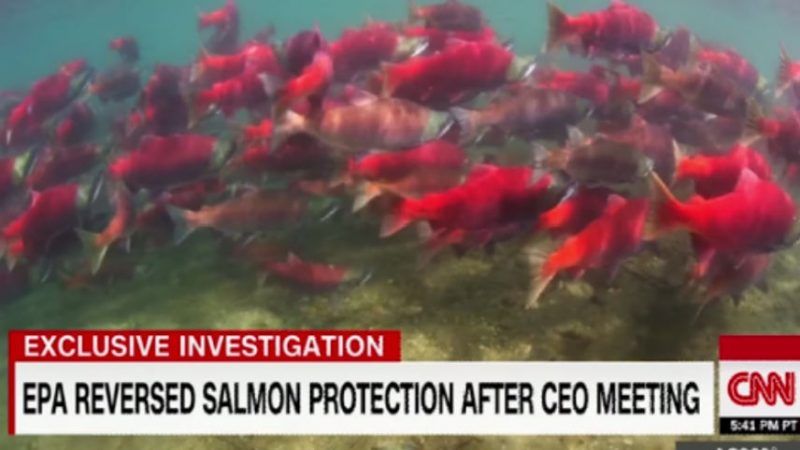 Did you happen to catch CNN's latest smear?

Anderson Cooper's show recently featured a "two-part exclusive" that claims Donald Trump's EPA director had conspired with the CEO of a mining company to "withdraw environmental restrictions" so the company could dig "the largest open pit mine in the world in an extremely sensitive watershed in wild Alaska."

The report was enough to horrify any caring person. CNN showed beautiful pictures of colorful salmon swimming in Bristol Bay, and the reporter intoned dramatically, "EPA staffers were shocked to receive this email obtained exclusively by CNN which says 'we have been directed by the administrator to withdraw restrictions'… Protection of that pristine area was being removed."

No! A "pristine" area and gorgeous salmon were about to be obliterated by a mine!

I would have believed it, except I happened to report on that mine a couple years ago.

I knew that the real scandal was not EPA director Scott Pruitt's decision to "withdraw the restrictions"; it was what President Obama's EPA did to the company's mining proposal in the first place.

Zealots at the EPA had conspired with rich environmental activists to kill the mine before its environmental impact statement could even be submitted.

The House Committee on Oversight and Government Reform later concluded: "EPA employees had inappropriate contact with outside groups and failed to conduct an impartial, fact-based review."

But CNN, implying devious secrecy said, "according to multiple sources, he made that decision without a briefing from any of EPA's scientists."

But Pruitt didn't require opinions from scientists. He didn't approve the mine. He didn't make a science decision. He simply followed the law and allowed a company to submit a proposal.

Did CNN mention that? No. Never. We asked CNN why. And why not point out that the mining company is just being allowed to start the EPA's long and arduous environmental review? They didn't get back to us.

Their reporter did at least speak with the mine's CEO, Tom Collier, who tried to explain.

"It's not a science—it's a process decision."

But the reporter, Drew Griffin, wouldn't budge. He called Collier "a guy who wants to mine gold in an area that many scientists believe will destroy one of the most pristine sockeye salmon sporting grounds in the whole world."

By the way, Collier isn't an evil Republican-businessman-nature-destroyer. He's a Democrat who once ran environment policy for President Bill Clinton and Vice President Al Gore. CNN never mentioned that either.

Instead the reporter implied evil collusion: "This looks like the head of a gold mine went to a new administrator and got him to reverse what an entire department had worked on for years."

Here at least the report was accurate. Obama's environmental department did try to kill that mine for years. They colluded with groups like the Natural Resources Defense Council (NRDC), one of America's wealthiest environment groups.

The NRDC is mostly made up of anti-progress lawyers who want no mines built anywhere. Don't believe me? I asked NRDC spokesman Bob Deans:

STOSSEL: There are some mines where NRDC says, great, go ahead?

STOSSEL: Are there any?

DEANS: It's not up to us to green light mines…

STOSSEL: Are there any you don't complain about?

So I asked him for some names. He and the NRDC still haven't provided any.

If these zealots and their sycophants in the media get their way, America will become a place with no mining, no pipelines, no oil drilling, no new … anything.

The acronym used to make fun of anti-development attitudes used to be NIMBY—Not In My Back Yard. Now it's BANANA: Build Absolutely Nothing Anywhere Near Anybody.