If you strip away legal protections for rights valued by millions of Americans, you're just going to make them angry to no good end. 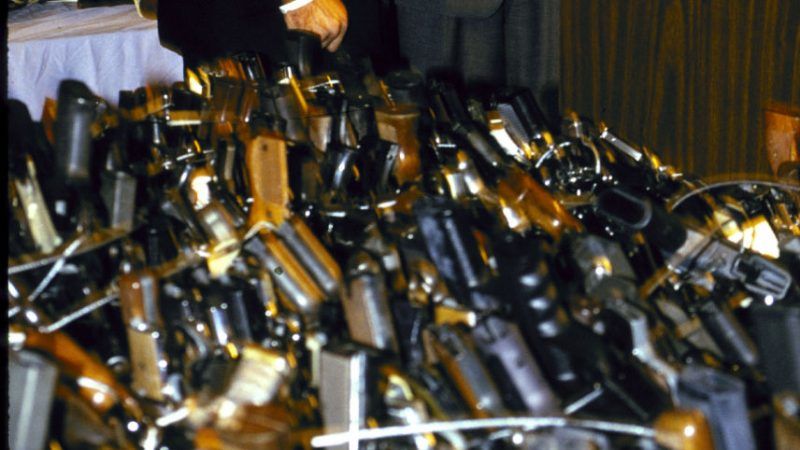 It's always been true, as gun restrictionists have repeatedly promised, that "nobody's going to take your guns away." But few gun owners have ever believed that was from lack of intent; it was always from the absence of any practical way of implementing such a taking. That's become increasingly clear in the wake of the truly horrific Mandalay Bay massacre as open calls for repealing the Second Amendment's protection for self-defense, and even for banning privately owned guns, get louder.

And still, the increasingly open prohibitionists haven't come up with a proposal to make their plans stick.

Perhaps most prominent is Bret Stephens, a conservative columnist at the New York Times. He pointed to Stephen Paddock's rampage in Las Vegas, as well as some alleged correlations between firearms ownership and homicide (contradicted by other research), dismissed most gun control efforts as "feckless," and called on America to "Repeal the Second Amendment" or else "Expansive interpretations of the right to bear arms will be the law of the land—until the 'right' itself ceases to be."

And what's the point of stripping way part of the Bill of Rights if you're not going to then pass restrictive laws previously barred by the deleted provision? Senator Dianne Feinstein (D-CA) makes no secret of her long-time desire to outlaw anything made of metal with a hole in it. Senator Chris Murphy (D-CT) sees every intrusive law as only "a first step on gun control." Progressive documentary filmmaker Michael Moore wants to repeal the Second Amendment, and won't rest until "All automatic and semi-automatic guns are banned" and "guns must be stored at a licensed gun club or government-regulated gun storage facility." The New Yorker's Adam Gopnik wants "no truce with the Second Amendment." And the New Republic's Phoebe Maltz Bovy says "It's Time to Ban Guns. Yes, All of Them."—in a demand originally published in 2015, but reissued by her publication last week. Taking the anti-gun crusade right up to 11, hereditary celebrity Nancy Sinatra thinks "the murderous members of the NRA should face a firing squad."

Well, that should certainly convince gun owners of the desirability of compromise and of surrendering their property.

But, contrary to Stephens' assertions, expansive interpretations of rights don't depend on black-letter protections under the law. People around the world assert a right to free speech even in places where the exercise of the same is harshly punished. The same-sex marriage that the Times columnist rightly cites as a major political accomplishment was fought for by people who considered it their right long before the law recognized it in any way. The idea that rights exist naturally and independently of political protections is a long American tradition, extending well before Thomas Jefferson wrote "all men are created equal, that they are endowed by their Creator with certain unalienable Rights, that among these are Life, Liberty and the pursuit of Happiness" and through Joe Biden's 2008 assertion that "I believe my rights are not derived from the Constitution. My rights are not derived from any government. My rights are not denied by any majority. My rights are because I exist." Repeal the Second Amendment, and you're not telling gun owners that their right has been eliminated; you're telling them that the legal and political system under which they live is hostile to rights they take as inherent, and that they'll now have to be more vigilant than ever.

That's assuming that a philosophical basis is required to inspire people to acquire and keep weapons. That's not necessarily so.

We don't know whether many Germans, for instance, believe in a natural right to bear arms, but we do know that Germany offers no legal guarantees for such a right. The country's laws are rather restrictive, too. Yet the country's roughly 82 million people own about 5.8 million legal firearms and 20 million illegal ones as of 2016, according to the Sydney School of Public Health's GunPolicy.org. The Geneva-based Small Arms Survey has similar numbers, putting the 2003 figures at 7.2 million legal weapons and 17-20 million illegal ones. For France's 67 million people, GunPolicy.org puts legal firearms at 2.8 million for 2016, and guesstimates 7.2 million illegal ones. Small Arms Survey agrees on the legal figure, but puts illegal firearms in France at 15 to 17 million.

Neither France nor Germany has anything like a Second Amendment, but millions of inhabitants of both countries arm themselves with firearms nevertheless, either because they remain committed to a philosophical right to do so, or because they just think it's a good idea. And they acquire and keep those guns largely in defiance of laws intended to disarm them.

Does anybody really believe that Americans steeped in a culture of natural rights and a history of personal armament will be more compliant than Europeans with no such heritage?

So, French and Germans are less murderous overall than Americans (even after several decades of general declining violent crime in the U.S.), and remain less murderous despite possessing impressive illegal armories. And those armories are of a size to make the difference in violent crime rates even more stark. Could something else–say cultural factors–be at work here?

The social psychologist Steven Pinker, author of The Better Angels of Our Nature, thinks so. He believes that America's frontier experience, with people settling well ahead of a government presence, makes a big difference. "The United States has a higher rate of violence, partly because large parts of the country were in a state of anarchy until the 20th century. People could not count on the government to protect them," he told an interviewer in 2011. "When governments did arrive, people were reluctant to hand over their self-protection. And because the first government in America was a democracy, people were able to impose their wishes. In European countries, first the government disarmed the people and exerted its control many hundred years ago. Then the people democratized the government, but by then the government had already established control."

Which is to say that, relative to our European friends, Americans are a bit feral, violent, and resistant to control. Are we more resistant to control than the French and Germans who peacefully flout their countries' laws? Could be. History doesn't suggest that repealing the Second Amendment and saying "bring 'em in" has much of a path to success.

When in 1990 New Jersey imposed an "assault weapons" ban on the possession of semiautomatic rifles with certain cosmetic features that give them a military look, the response was underwhelming. One year later, the New York Times reported that of the estimated 100,000 to 300,000 affected weapons in the state, "Only four military-style weapons have been turned in to the State Police and another 14 were confiscated. The state knows the whereabouts of fewer than 2,000 other guns."

More recently, after 2008's Heller decision supposedly took the most draconian gun restrictions off the table by reaffirming the Second Amendment's protection of individual right to own weapons, Connecticut passed a comparatively less restrictive registration requirement. Owners responded by telling the state about their possession of "as little as 15 percent of the rifles classified as assault weapons owned by Connecticut residents," according to the Hartford Courant.

"If you pass laws that people have no respect for and they don't follow them, then you have a real problem," commented Sen. Tony Guglielmo (R-Stafford).

New York followed up with a similar law of its own that achieved perhaps 5 percent compliance.

"What these numbers expose is that, if there are people who are wilfully ignoring the law, that means tens of thousands of gun owners are not complying with a law that is supported by New Yorkers," huffed Leah Gunn Barrett of New Yorkers Against Gun Violence.

Those overwhelming failures of restrictive gun laws came in three of the most gun-unfriendly states in the country. Two of them came after the Supreme Court issued assurances that total bans were off the table. What do Bret Stephens, Feinstein, Maltz Bovy, Moore, and company (the less said of Sinatra, the better) think is going to happen in the unlikely event that they successfully navigate the constitutional requirements to repeal part of the Bill of Rights and its legal protections? Do they expect people in Arizona, Texas, Vermont and other more gun-friendly regions to meekly respond to the removal of the Second Amendment's protections? Or are they likely to dig in their heels?

If it's true that Americans are culturally more violent and less submissive to state power than some overseas cousins, their violent inclination are unlikely to respond easily to legal revisions. And they probably ought not be provoked by politicians and pundits who have no apparent plan, except to antagonize a good many people around them.