Let's Lay Off the 1930s Reenactments 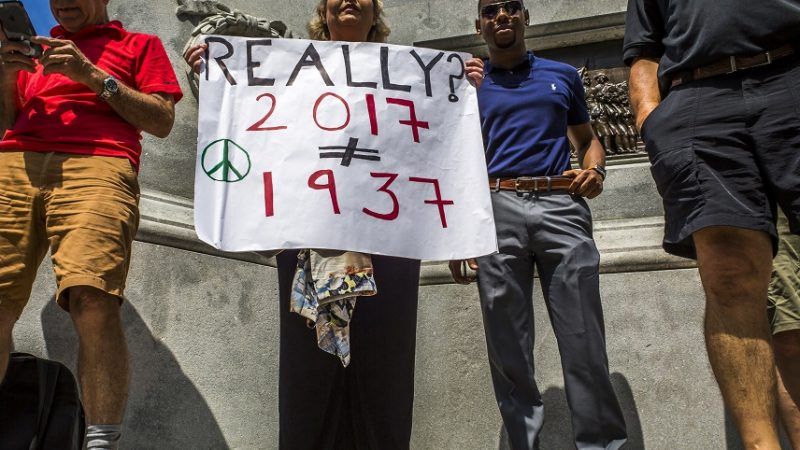 We can be forgiven, I think, for wondering if historical reenactors are looking to the 1930s for inspiration and excitement. Two groups of losers (to borrow a favorite pejorative of the moment)—white supremacists/neo-Nazis and antifa/neo-communists—have revived the hoary collectivist ideologies of that era in a seemingly conscious effort to live out their Weimar dreams of heroic street fighting.

It would be bad enough if the 1930s reenactments were confined to bloody clashes in the streets, but they're not. Then, as now, those clashes were the outcome of a larger loss of faith in individualism, tolerance, and the sort of open, unbossy, relatively live-and-let-live society that we sum up, within broad parameters, as liberal democracy.

"Democracy has become much more dysfunctional in the West, and particularly in the United States, I think more than anywhere else," Adrian Wooldridge told a Harvard Business School interviewer after the 2014 publication of his book, The Fourth Revolution: the Global Race to Reinvent the State. "And that is it seems to be completely gridlocked, it seems to be incapable of taking long-term decisions, and it seems to have become a prisoner of various interest groups."

Writing before the rise of Trump, as well as of populist movements and politicians across Europe, Wooldridge, Management Editor of The Economist, and co-author John Micklethwait, former editor-in-chief of the same magazine, posited that modern democracies have paralyzed themselves with unaffordable welfare-state commitments.

"Ever-bigger government meant ever-greater social dysfunction. Vested interests competed ever more viciously for their share of the pie," they write in the book.

Debt-ridden and sclerotic, democratic governments are unable to keep their promises or clean up their messes, and so anger their constituents. In desperation, voters look further and further afield for solutions—even to explicitly authoritarian fixes and demagogues who finger unpopular groups or classes to blame.

We've been here before. In the 1920s and 1930s, after the bloodbath of the Great War and even more with the onset of the Great Depression, Americans and Europeans also lost faith in liberal democracy.

"In the wake of global economic disaster, there was no particular reason to prefer the political system most closely associated with capitalism—liberal democracy—to new systems that promised a brighter future," muses historian Wolfgang Schivelbusch in his 2006 book, Three New Deals.

The fate of Weimar Germany is well-known, as is the rise of authoritarianism and totalitarianism across most of Europe of the time. But the U.S. did better only by comparison.

The atmosphere in Washington, D.C. was "strangely reminiscent of Rome in the first weeks after the march of the Blackshirts, of Moscow at the beginning of the Five-Year Plan.…America today literally asks for orders," the New York Times reported on May 7, 1933. In short order, administration officials including Hugh Johnson, Rex Tugwell, and even President Franklin Delano Roosevelt were openly praising the policies and precedents set by Italian dictator Benito Mussolini.

And they weren't fond of naysayers.

"Roosevelt appointed loyalists to the Federal Communications Commission who made it clear that licenses would be revoked for broadcasters who aired programs critical of the government," Thaddeus Russell notes in A Renegade History of the United States.

The current White House occupant is no fonder of press critics than his 1930s predecessor, calling journalists "liars" and "sick people" and questioning their patriotism. He's also called for loosening libel laws to make it easier for political figures to penalize unfriendly media outlets—although it should be noted that Trump's anti-press efforts so far consist more of hot air rather than actual government action.

But free speech may be even less popular in the wider society than it is in the White House. "The Supreme Court is upholding the black letter of liberty, but are Americans upholding its spirit? When college students, encouraged by professors and administrators, believe that they have a right to be free of offense, no," wrote legal blogger Ken White in June of this year. He noted that legal protections for free speech have never been stronger, but that the cultural basis required to keep those legal protections in place and relevant seems to be eroding.

While polls continue to find strong support for free speech in the abstract, people are less certain about protecting speech that actually requires protection—say, public demonstrations by racists, as revealed by a recent UC-Berkeley poll. More disturbingly, college students seem to be tightening the boundaries of speech they deem worthy of unpunished expression, supporting restrictions on "language or expression that intentionally hurts or offends others," in the words of Gallup. That's understandable given that they're taught by academics like Laura Weinrib of the University of Chicago Law School who sneers that "free speech has served to secure the political influence of wealthy donors," and by the UCLA School of Law's K-Sue Park who slams the ACLU for its free speech advocacy, charging that "By insisting on a narrow reading of the First Amendment, the organization provides free legal support to hate-based causes."

If our civil liberties are again at risk, so are our related economic freedoms. Americans who thought we had narrowly dodged the totalitarian dangers posed during the 20th century now live in a world in which New York City Mayor Bill De Blasio openly muses, "I think there's a socialistic impulse, which I hear every day, in every kind of community, that they would like things to be planned in accordance to their needs. And I would, too….Look, if I had my druthers, the city government would determine every single plot of land, how development would proceed."

De Blasio is a favorite for reelection, by the way.

The president for his part—nominally a political opponent of the New York City mayor—also sees economic activity as something to be manipulated by the state for the purposes of government officials.

"The United States is considering, in addition to other options, stopping all trade with any country doing business with North Korea," he tweeted earlier this month. That's after threatening penalties for any business that moves its operations overseas.

So private enterprise is to engage in transactions only at the whim of the state, and if it tries to escape such controls, it'll be punished. Got it.

And "rather than jeer Trump's protectionist positions, Democrats are echoing them and amplifying them," notes the Washington Post. This despite the fact that economists overwhelmingly agree that free trade builds prosperity.

But that was the case in 1930, too, when economists overwhelmingly opposed the Smoot-Hawley Tariff act. The bill passed anyway, an international trade war ensued, and world trade plunged by two-thirds within a few years.

Which helped pave the way for increased doubt about freedom, democracy, and the market system.

The disastrous flirtation of the 1930s with socialism and fascism, brownshirts vs. redshirts, and disillusionment with personal freedom did long-term, but not crippling damage to the world in which we live. Liberal democracy survived, though in a bruised form, and presiding over governments more intrusive than in the past. That lesson was taken to heart at the time by some people who tried to pass it on to the generations to come. As a warning against repeating such mistakes, Karl Popper wrote The Open Society and Its Enemies, and F.A. Hayek penned The Road to Serfdom. They'd seen how easy it was for free societies to lose faith in themselves and to follow cynical leaders and thuggish ideologies.

We could read those warnings and learn from them. That would cause a hell of a lot less heartache and injury than blindly reenacting the 1930s.