What Happened at the Juggalo March on Washington?

'We've been hiding under the streets for way too long.' 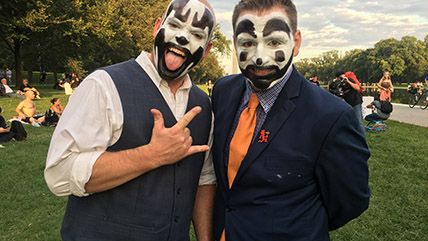 Juggalos marched on Washington, D.C., September 16, to protest a gang label given to them by the Federal Bureau of Investigation (FBI) in 2011. The fans of Insane Clown Posse (ICP) say the gang label has lead to Juggalos losing their jobs, getting harassed by police and even being used against them in child custody cases—All over liking a certain band's music.

ICP tried to sue the government to change the label but the case was thrown out of court. They decided their only option was to tell the world in a public way how they felt about their fans being labeled gang members.

Click below for full text, links, and downloadable versions.