Abe Lincoln's Visit to Richmond, Va. Caused Controversy, Back in 2002

Monuments do not merely signify the existence of historical facts; they pass judgment upon them. 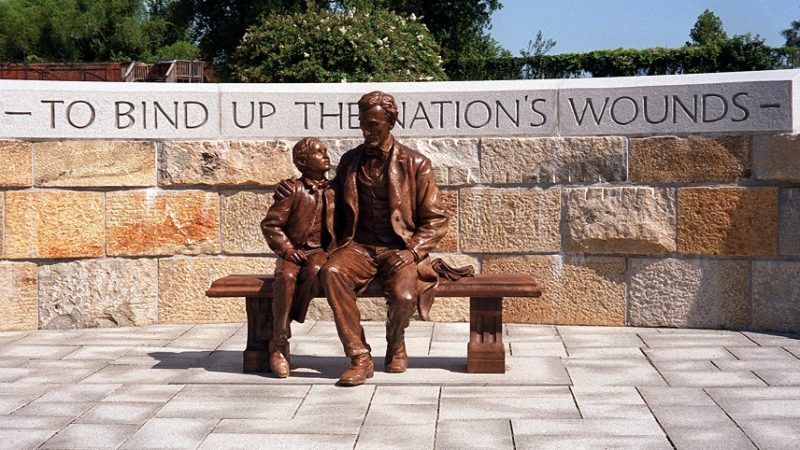 When people ask what makes central Virginia a good place to live and raise a family, several answers come to mind.

For starters: The cost of living is reasonable, and the weather is seasonable.

And the metro area is big enough to have good restaurants—but not so big that you can't get a table.

Yet perhaps the biggest draw is the world-class entertainment you can get by watching people fight over the Civil War.

Fighting over the Civil War—a.k.a the Late Unpleasantness, a.k.a The War of Northern Aggression—has been the unofficial pastime around here since… well, pretty much since the Civil War. And statues have remained the ball everyone likes to bat around most.

That was true from the outset. As plans for a monument to Robert E. Lee progressed, contention broke out over its location (too far from the city center), its artist (a Frenchman!) and even the marble for the base. Confederate Gen. Jubal Early objected to the use of damned-Yankee stone from Maine, rather than meet-and-proper Southern stone.

That debate probably paled in comparison to the controversy over the Arthur Ashe statue in 1995, which lasted for months.

People thought it was inappropriate to put a tennis player on an avenue renowned for monuments to war heroes. (Oh, and Matthew Fontaine Maury, the world-famous oceanographer. Don't forget him.)

Some abhorred the statue on purely aesthetic grounds. Others suggested putting up a statue to black Confederates instead. Some argued that erecting an Ashe statue so close to monuments honoring Confederates would insult Ashe. Some thought it was a great idea: Doing so would "bring racial justice to Monument Avenue," in the view of City Councilman Chuck Richardson.

Then there was the time Lincoln came to town. Again.

The 16th president's first visit took place in early April1865, shortly after the Union captured Richmond. He traveled on a gunboat up a James River so clogged with dead horses, floating mines, and sunken ships that eventually he had to climb into a rowboat before disembarking at Rocketts Landing.

Lincoln was immediately surrounded by African-Americans recently released from bondage, who exulted at his arrival. "Such wild, indescribable ecstatic joy I never witnessed," wrote an observer of the scene. (Strange, isn't it, that slaves should be so happy to be freed, when—according to some—they were treated so wonderfully by their masters? It's almost as if those accounts of slavery's benevolence are not entirely accurate.)

Lincoln made the long hike uphill to the White House of the Confederacy, lately abandoned by Jefferson Davis, and took a chair to catch his breath. Later he rode through the ruined city with Union Gen. Godfrey Weitzel, who asked how he ought to treat the locals. "Let 'em up easy," Lincoln advised.

He didn't live long enough to ensure that would happen. Ten days after his visit, John Wilkes Boothe killed him.

As plans for the statue advanced, a conference was organized to expose the "real" Lincoln—the one who arrested political opponents, shut down newspapers, created a "centralized bureaucratic state," and so on. Why, sometimes Lincoln even told—cover your eyes for this part, ladies—"bawdy stories." Who could even think of erecting a monument to such a monster?

The statue of Lincoln seated next to his son Tad eventually was unveiled at Tredegar. Oliver Hill, the legendary civil rights lawyer, was present for the occasion; he called it "the finest thing that has happened in years." Meanwhile, anti-Lincoln protesters from the Sons of the Confederate Veterans let it be known that they were none to happy about the testament to a "war criminal."

Which is an interesting position to take, in light of the current debate over Confederate statues. Those who favor leaving the statues up and unaltered contend that they simply represent history—and people who take offense at the statues fail to understand that history is something you just can't erase.

One could say exactly the same about the Lincoln statue and the Ashe statue on Monument Avenue as well: They denote history, just like a textbook or roadside historical marker.

So why all the big fuss?

The answer is obvious: Monuments do not merely signify the existence of historical facts; they pass judgment upon them.

So if you tire of the current dispute over the Civil War, don't worry: It will pass in due time—to return again later for yet another round.