The thug's veto, this time from the far left. 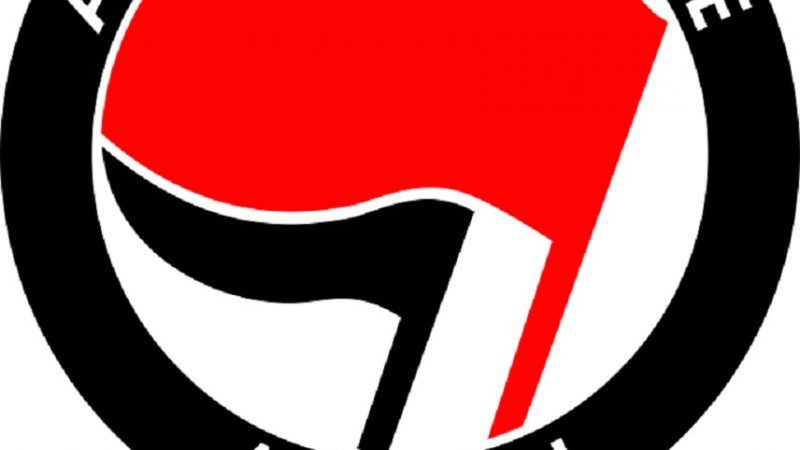 At least five people were attacked and 13 people were arrested during a "Rally Against Hate" held in Berkeley, California on Sunday. As the The Washington Post reports, the violence this time was due entirely due to left-wing anarchists or members of a loosely aggregated group grouped under the generic name antifa (short for "anti-fascist").

Shortly after, violence began to flare. A pepper-spray wielding Trump supporter was smacked to the ground with homemade shields. Another was attacked by five black-clad antifas, each windmilling kicks and punches into a man desperately trying to protect himself. A conservative group leader retreated for safety behind a line of riot police as marchers chucked water bottles, shot off pepper spray and screamed "fascist go home!"

All told, the Associated Press reported at least five individuals were attacked. An AP reporter witnessed the assaults. Berkeley Police's Lt. Joe Okies told The Washington Post the rally resulted in "13 arrests on a range of charges including assault with a deadly weapon, obstructing a police officer, and various Berkeley municipal code violations."

It's clear that Antifa is committed to stirring up violence at protests, creating a version of the thug's veto, especially in the absence of effective policing (the ACLU has archly criticized law enforcement's handling of the neo-Nazi rally in Charlottesville that left dozens injured and one dead). If every event has the potential to become violent, fewer people are likely to gather. Unlike many groups on the right and left, antifa doesn't publicly eschew violence but instead sanctions it as self-defense against white supremacists and, in many cases, police trying to maintain order at rallies, marches, and protests. From an explainer at USA Today:

"We are unapologetic about the reality that fighting fascism at points requires physical militancy," Rose City Antifa's Facebook page reads. "Anti-fascism is, by nature, a form of self-defense: the goal of fascism is to exterminate the vast majority of human beings."

Antifa is at its core anti-liberal in that it dismisses freedom of speech and peaceful assembly as an instrument of Marcusian "repressive tolerance," or a means by which an unacceptable status quo is maintained through a belief in a supposedly disinterested belief in a marketplace of ideas.

That's the most-charitable explanation for antifa's readiness to commit violence in public, that its members want to deny racists a public forum (in fact, it's not exactly clear what the original organizers of yesterday's march in Berkeley were all about; in any case, it's clear from press reports that the vast majority of people assembled were against any sort of neo-Nazi or alt-right beliefs). Any group that claims "hate speech is not free speech" is going to become not just censorious but violent pretty quickly.

Indeed, a less-charitable explanation, that antifa is an inherently violent group, is far more compelling: Earlier this year in the Bay Area, members of antifa protested speeches at Berkeley by Milo Yiannopoulis and Ann Coulter by roughing up people, lighting fires, and damaging property. They were also responsible for violence and destruction at Donald Trump's inauguration in Washington, D.C. and various other events. Their "self-defense," which they invoke to justify due to what they claim is righteous action against a sick society, is simply a variation on American foreign policy's reliance on "pre-emptive war," which sanctions violence out of the box whenever the powers that be declare it valid.

As with white supremacists, getting a sense of the actual numbers of members of antifa is impossible, though the movement is clearly small. Provocatively, antifa needs the alt-right almost as much as the alt-right needs them. Each side wants to be able to point to its ideological opposite to legitimize its own extreme beliefs and actions, especially the recourse to violence (one need only compare white supremacist Chris Cantwell's romance of revolutionary violence against IRS agents, Jews, and the like to antifa's public statements to see a mirroring effect).

The rise of antifa, like the rise of ethno-nationalism, actually provides a common ground among conservatives, liberals, and libertarians who believe in the classical-liberal ideals of free speech and tolerance. If the proper answer to bad speech is more and better speech, the answer to violence that threatens the right of assembly is more and bigger assemblies dedicated to free speech and peaceful assembly. The rise of vocal and violent extremism is a sign of a political system that may be exhausted, but it is also an opportunity to revitalize core American beliefs.

Related: Andrew Sullivan in New York magazine, on the left's "intolerance of free speech" and why it's a big problem.