Is There Really an 'Insidious Libertarian-To-Alt-Right Pipeline'?

No, but believers in "Free Minds and Free Markets" should be in the forefront of attacking racism, anti-Semitism, and parochialism. 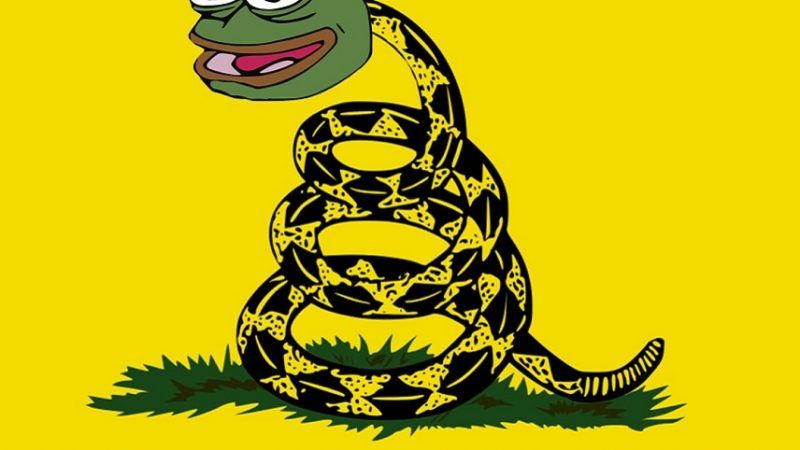 "Libertarianism has an alt-right problem," writes Matt Lewis over at The Daily Beast. "It seems observably true that libertarianism is disproportionately a gateway drug to the alt-right."

He notes that a number of high-profile leaders of the alt-right—Milo Yiannopoulis, Richard Spencer, Christopher Cantwell, among others—either flirted with or explicitly identified as libertarian at some point in their stumblebum hegiras toward anti-Semitism, white supremacism, reactionary sexism, and/or neo-Nazism.

For instance, Cantwell, who can barely complete a sentence or a crying jag without slagging "the Jews," was part of the Free State Project before he rightly got bounced after advocating the indiscriminate killing of "government agents." Milo flirted with the term too before concluding that "libertarians are children…obsessed with weed, Bitcoin, and hacking." Richard Spencer apparently attended Reason's 2007 "Very Secular Christmas Party" at which Christopher Hitchens led a sing-along of Tom Lehrer's "Christmas Song" (I organized that event, which drew a couple of hundred people but had no idea that such a future thug was among the crowd).

libertarianism is somewhat unique in its unflinching support of free speech. In some cases, this free speech is unsavory. If you're anti-political correctness, libertarianism might seem like a good place to land—even if you don't buy into the whole libertarian philosophy.

Along the same lines, libertarians mostly believe that private actors have a right of association that would allow businesses to refuse customers even for racist, homophobic, or sexist reasons. That is in no way an endorsement of such behavior, but it clearly creates space for alt-right haters to catch their fetid breath.

Lewis' article (in which I appear, more on that in a moment) builds on a recent post at Hot Air by Tyler Millard, a libertarian contributor to that conservative site. Millard argues that the loose coalition of libertarians and conservatives needs to "purge White Supremacist Leaders, Ideology," from our midst.

The problem is these Richard Spencers and Peter Brimelows [the founder of the racist site Vdare.com who wrote anti-immigration articles for National Review in the 1990s] got their start in "the movement," under the guise of paleoconservatism, while others are part of the Hans-Hermann Hoppe bloc of libertarianism. They are the wolves in sheep clothing looking to draw more and more people into their pack while ripping away at the foundation of freedom and liberty at the same time.

So there is definitely some mingling going on. But does any of this add up to a "pipeline"? I don't think so, for reasons I explained to Lewis.

"These people [may] start off calling themselves libertarian, but they are the antithesis of everything that the libertarian project stands for—which is cosmopolitanism versus parochialism, individualism vs. group identity, and libertarianism or autonomy versus authoritarianism," Nick Gillespie, editor in chief of Reason.com tells me….This affinity for libertarianism "wears off when they realize that we're principled, that no, we're not just trolling," says Gillespie.

The Cato Institute's David Boaz reminds Lewis that Jason Kessler, the organizer of the fascistic and deadly "Unite the Right" rally in Charlottesville, was originally a member of the Occupy movement while granting that "some libertarians become conservatives, some become welfarist liberals, a few drift into creepy extremes." And Lewis himself admits "that many of today's alt-righters are disaffected conservatives." So it's an overstatement at the very least to characterize the alt-right as mostly former libertarians.

Yet there is no question that some elements in the broadly defined libertarian movement articulate policy positions almost indistinguishable from those of the alt-right and Donald Trump. This is especially true when it comes to issues such as immigration. From Lewis' story:

On a post-Charlottesville blog post, Cantwell discussed his conversion from libertarianism to the alt-right. "As immigration became a leading news story in America and Europe," he writes, "Lew Rockwell gave a talk titled 'Open Borders Are an Assault on Private Property.' From here, I decided to read Hans Hermann Hoppe's 'Democracy: The God That Failed.' From these, I realized that the libertine vision of a free society was quite distorted. The society we sought actually would provide far more order and control than [would] modern democratic governments. It would encourage more socially conservative behavior and less compulsory association. Just when I thought I had everything figured out, I was once again reminded of my naivety."

I told Lewis that Ron Paul's high-profile presidential runs in 2008 and 2012 played a role too. When I started at Reason in the fall of 1993, I'd say that most people came to libertarianism via exposure to some mix of Ayn Rand and Milton Friedman, along with some Robert Heinlein, F.A. Hayek, Murray Rothbard, and institutions such as Cato, the Foundation for Economic Education, the Institute for Humane Studies, and Reason. But over the past decade or so, there's no question in my mind that Dr. No is probably more responsible than any individual for raising libertarianism's visibility and reach.

"In a way, Ron Paul is the guy who lit the fuse," Nick Gillespie says. "And he embodies some of those contradictions [between libertarianism and the alt-right]." Gillespie tells me that Richard Spencer came up to him at the Republican National Convention in 2016 and said that he was activated into politics because of Paul. Gillespie sees Paul's legacy as very mixed, as someone who was "simultaneously… positing this very libertarian worldview, but then he's also speaking to people's fears and anxieties." If one were looking for the missing link to explain this phenomenon, Ron Paul (and his paleolibertarian allies) would be a good place to start.

Paul really did simultaneously embody an attractive, idealistic version of libertarianism and an appeal to populist paranoia that is very evident in alt-right fears about porous borders, encroaching Sharia law, and foreign control of America's economic and cultural life. As Brian Doherty reported in 2008, Paul was packing college auditoriums with a basic stump speech that went something like this:

Paul does not mention abortion or immigration—areas where his views are more conventionally conservative and not of great appeal to this age group. He's against abortion and thinks the fetus is a human life deserving of state protection, but he also thinks that like all such crimes against persons, abortion is a matter for states to decide without federal interference. He thinks that border defense is a legitimate function of government, and that government has been doing a bad job of it. He wants tougher border enforcement, including a border wall; he wants to eliminate birthright citizenship; and he wants to end the public subsidies that might attract illegal immigrants. Paul's style of libertarianism includes a populist streak of distrust for foreign forces overwhelming our sovereignty, whether through the United Nations, international trade pacts, immigration, or a feared "North American Union" between the U.S., Canada, and Mexico.

If you bleach out the libertarian aspects of Ron Paul's 2008 stump speech, you're pretty much left with the agenda pushed by Donald Trump and the alt-right, both of which seem comfortable with a welfare state as long as the welfare is going to the right kind of people. Paul also eschews the sort of "Make America Great Again" rhetoric, which undergirds Trump's and the alt-right's fetishizing of masculine virtues and an overbuilt military.

Which is to reiterate that there is no "pipeline" between libertarianism and the alt-right. The alt-right—and Trumpism, too, to the extent that it has any coherence—is an explicit rejection of foundational libertarian beliefs in "free trade and free migration" along with experiments in living that make a mess of rigid categories that appeal to racists, sexists, protectionists, and other reactionaries. In that sense, the call by Hot Air's Taylor Millard for libertarians to purge white supremacists, anti-Semites, and living, breathing Nazis from our movement is misdirected since such people by definition are not libertarian. But he is surely right that alt-righters need to be called out wherever we find them espousing their anti-modern, tribalistic, anti-individualistic, and anti-freedom agenda.