Trump's Arizona Rally Is an Advertisement for the GOP's Pathologies 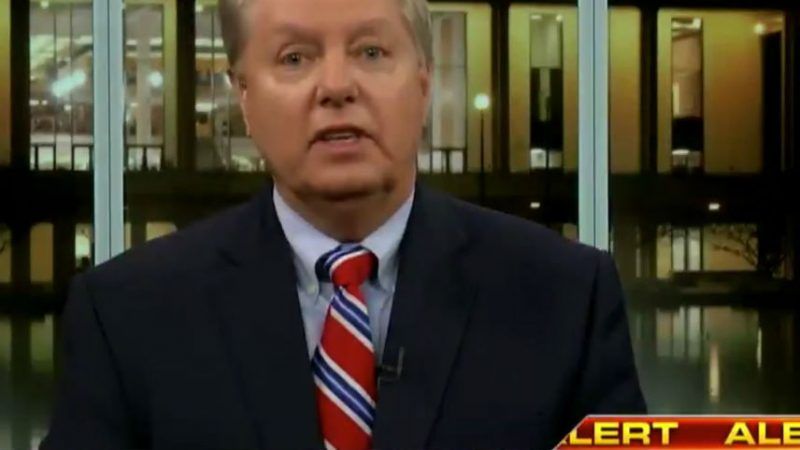 Donald Trump's anxiety-inducing rally in Phoenix tonight is being previewed as a possible inflection point between the president's nationalist/populist base and a more sober-minded GOP establishment, personified locally by the Trump-antagonizing Sens. John McCain and Jeff Flake. Nationally ambitious Arizona Gov. Doug Ducey, for example, is giving the event a wide berth, reportedly in part due to the Trump-floated trial balloon that he may use the occasion to pardon convicted former longtime Maricopa County Sheriff Joe Arpaio, a power-abusing opponent of civil liberties who is popular on the anti-immigration right.

Ducey's allergy to appearing on stage with Trump and Arpaio (the latter of whom may or may not show tonight) is certainly a late-breaking development—he was right there with the sheriff this time last year delivering an enthusiastic speech at one of Trump's most high-profile rallies. The governor, who by reputation has a finger-in-the-wind sense of political opportunism, was all too happy to pocket Arpaio's endorsement back in 2015 ("few, if any, lawmen have deployed more innovative ways of fighting illegal immigration and other crime than Sheriff Joe"), and as recently as eight months ago was singing the firebrand's praises at his retirement party: "This is a guy that's a legend and has a personality that's bigger than life. He will be remembered for a lot of things. Pink underwear, tent city, but I hope most of all they remember he committed himself to public service."

Rank GOP opportunism vis-à-vis Sheriff Joe and the gleefully punitive immigration restrictionism he represents is neither parochial nor new. As Arizona Republic columnist E.J. Montini has pointed out, "For more than 20 years ambitious Republicans have been genuflecting before Arpaio, seeking his blessing." Mitt Romney, who these days is seen as a kind of moral bulwark against his party's drift toward vulgar nationalism, named Arpaio as the honorary chair of his Arizona campaign way back in February 2007. "The first time I met the governor at a private meeting, first thing he said was 'How's the pink underwear doing?'" the sheriff told FoxNews.com back then, adding: "I'm sure the governor believes in my philosophy….He sure would not be asking for my endorsement if he didn't believe in what I'm doing."

Romney has done more than just about any modern politician not named Donald Trump or Jeff Sessions to mainstream the Republican Party's immigration authoritarianism. (Never forget: Romney's "mean-spirited" and "crazy" approach toward illegal immigration was deemed a key reason for his loss in November 2012 by none other than Donald J. Trump.) But even GOP politicians who have refused to kiss Arpaio's ring have also, during times of stress, tacked politically (if unconvincingly) toward Arpaioian policies, most notably John "complete the danged fence" McCain. As with the mainstream media, one suspects that some #NeverTrumpism is due to the president having the gall to actually mean what Republicans have long promised to their base.

Much of tonight's drama is centered around vulnerable incumbent Jeff Flake, who Trump has repeatedly targeted for criticism while signaling support for his primary opponent, Kelli Ward (who will be in attendance). I greatly prefer Flake to Trump for reasons we talked about on yesterday's Reason podcast and that I wrote about at greater length last year, and Ward sounds pretty Arizona-crazy to me. And yet this anti-Ward attack ad released this week by a SuperPAC associated with Sen. Majority Leader Mitch McConnell (R-Kentucky) is yet another reminder that the default Republican foreign policy position is open-ended war:

Got that? Foreign policy "restraint and realism" is disqualifying. And judging by the interventionists' enthusiastic reception to President Trump's speech last night announcing a troop increase in Afghanistan, at least one large room within the Trump-skeptic wing of the GOP is all but begging to join the Trump Train should he stick to the American family business of policing the world. Here, for example, is Sen. Lindsey Graham (R-S.C.) last night trashing Sen. Rand Paul (R-Kentucky) in the course of exulting that "the gloves are off in Afghanistan":

As ever, being a relentless hawk means never having to say you're sorry, and always having an open-ended invitation to appear on cable news.

McConnell this week said that there is "zero chance" of Congress failing to raise the debt ceiling, which effectively means there is zero chance of cutting expenditures by the federal government (particularly since Congress increased short-term spending May, and has shown zero inclination to shoulder even the minimum responsibility of passing an annual budget). So you have a Republican-led Congress that doesn't want to legislate, a Republican-led administration that lacks the courage to identify the fallacy of sunken costs overseas, a Republican professional class ready to opportunistically throw away long-treasured principles if it gets them nearer to power, and a populist base busy debating whether there's any "historic proof" to the "ideological statement" in the Declaration of Independence that "All men are created equal."

All that, plus?importantly!?some real deregulators chipping away at the administrative agencies, as well as a handful of overwhelmingly outnumbered fiscal conservatives like Flake, Paul, and Rep. Justin Amash (R-Mich.), the latter of whom lately has been saying such cheerful things as "Hopefully, over time, these two parties start to fall apart."

An interview worth watching as the seemingly incompatible wings of a numerically successful major party shudders through another Trump rally tonight: