While Arnold dings Donald on Charlottesville, Breitbart readies for "WAR." 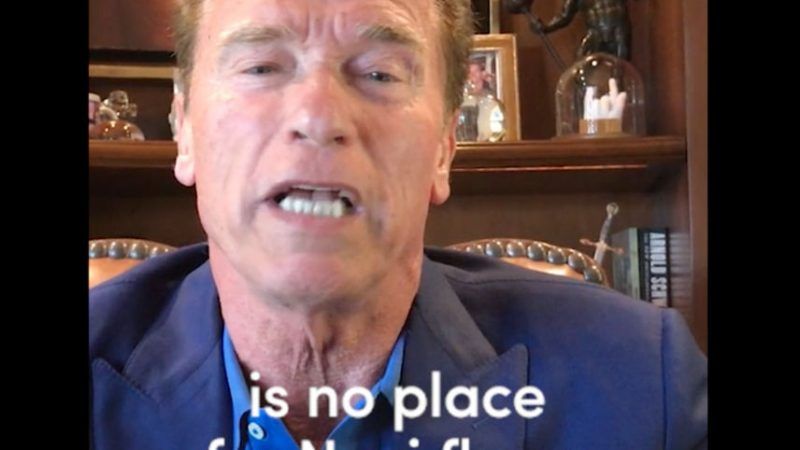 As the Twitter kids say, #ItBegins. First came news that controversial nationalist Steve Bannon was finally being shown the White House door. Next came widespread follow-up musing on how dangerous Bannon might become to President Donald Trump from the outside (including juicy quotes like, "If he leaves, it's the French Revolution"). Then came this ominous tweet from Joel B. Pollak, senior editor at large at the organization Bannon once headed and may soon return to, Breitbart News:

In the article, Pollak arguest that Bannon's exit "may turn out to be the beginning of the end for the Trump administration, the moment Donald Trump became Arnold Schwarzenegger." More:

When he took office in 2003 as Governor of California, "The Terminator" carried the hopes of conservatives in the Golden State, who saw him as a vehicle for their ideas, even if he was not a doctrinaire conservative himself. The faltering California Republican Party looked to Schwarzenegger to reverse its long-term decline, and Republicans elsewhere saw his success as a model from which they could learn as they courted moderate, swing-state voters.

But after struggling with intense media criticism, and after losing a key referendum on reforms to state government, Schwarzenegger gave up on his agenda, and abandoned the political base that had brought him into office. He re-invented himself as a liberal, embracing policies such as California's controversial cap-and-trade program, which had zero effect on climate change but has chased businesses, jobs, and middle-class families out of the state.

Politically, Schwarzenegger's gambit was a success. He won re-election in 2006. But his second term was a disaster. When he left office in 2010, the state was in a financial shambles and the California Republican Party had begun a decline from which it still has not recovered.

If that argument sounds familiar, it might be because I made one similar to it not long after Trump took his oath of office, albeit without the paeans to Bannon ("a self-made man, and not a Washington climber…master strategist, the man who turned a failing campaign around in August 2016 and led one of the most remarkable come-from-behind victories in political history," etc.). Sample from my column:

Trump and Schwarzenegger have even more in common than hosting the same television show, taking the same unusual career path from celebrity to executive office, and surviving the same type of sexual allegations.

Each man was a rank outsider in the field he would come to dominate: the bodybuilder with a thick accent in Hollywood, the Queens hustler in Manhattan real estate and high society. Each would live their lives surrounded by liberal Democrats, including sometimes at home. And each exceeded skeptics' expectations at nearly every step, in large part due to a conscious cultivation of consumer fan bases.

I might also add, each is a Grade-A narcissist and competitive monster (I say the latter as a compliment), which means that they just can't pass up an opportunity to lash out at one another. Including Arnold, this week:

Where does the Trump-Schwarzenegger feud and comparison go from here? Who knows! But here are three preliminary observations:

1) Trump doesn't do humility. In order to execute the kind of heel-turn Schwarzenegger managed after 2004, it helps to be able to convincingly say, as Arnold essentially did, "The people have spoken, and I have listened to them. I was wrong." Whether it's his training as an actor, or just a West Coast/East Coast thing, Schwarzenegger can pull it off.

Trump, on the very few occasions during his political career which he as even hinted at any error, has looked like the protagonist in a hostage video.

2) Trumpism is a movement; Arnoldism never was. Schwarzenegger was a popular celebrity who was fluent in politics at a time when incumbent California governor Gray Davis was widely reviled, and the rest of the Golden State's political class (including the GOP, which, contra Pollak, was already moribund before Arnold went to Sacramento) was serially coughing up duds. But he didn't represent some new or reformulated bloc of voters finding their collective voice at the same time.

Trump, on the other hand, has been at the center of something new and large since long before Steve Bannon joined his team. Politicians, even experienced ones, who get caught up in movements larger than themselves (see Howard Dean in 2003-04, or Ron Paul's two rEVOLutions, or Bernie Sanders last election), get changed by the experience, including in directions the candidates themselves didn't intend to go. (Look at the way Trump's views on Syrian refugees evolved last fall over the course of just one month.) Such movements become life-altering experiences for the personalities at the center, making it harder for them to capriciously abandon core tenets.

Donald Trump has always been a mercantilist, nationalist, law-and-order type; even if his full-throated immigration-restrictionism is of more recent vintage, the leaked transcript of his phone conversation with Mexican President Enrique Peña Nieto revealed a man almost pathetically scared of his own riled-up base.

The biggest issue I could see Trump selling out on—and it's a big one—is foreign policy interventionism. With Bannon out the door, after butting heads with the various military brass within the administration, the chances of Trump being a reliable intervention-skeptic seems even more remote than before.

3) Bannon and Trump still need each other. Most Trumpworld pugilists who've been bounced from his inner orbit—Corey Lewandowski, Roger Stone, etc.—have remained valuable allies off the government payroll. Bannon may harbor dreams of a new anti-Trump nationalistic populism, but the United States is in thrall to the cult of the presidency, and it's precisely in the nationalist/populist base that the president locates his most passionate support. A war of words between the two men and their respective organizations would most likely just factionalize and shrink the existing bloc of America-Firsters.

Steve Bannon just went on the record with me about his next move (story breaking now on @TheTerminal and @bw): pic.twitter.com/EDPULg25VR