Donald Trump and the Sad Triumph of Right-Wing Political Correctness

The president isn't attacking P.C., as he once promised. He's sanctioned its use among his followers. 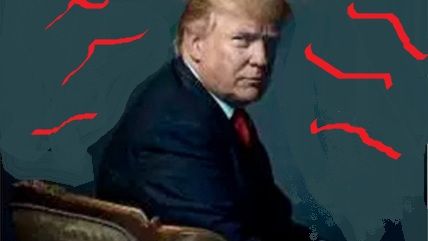 Back at the 2015 event at which Donald Trump announced his bid for the presidency, his daughter Ivanka introduced her father as, first and foremost, an implacable foe of political correctness. "My father is the opposite of politically correct. He says what he means and he means what he says," she said, shortly before Trump characterized Mexican immigrants as disease-ridden, drug-smuggling rapists ("Some, I assume, are good people," he granted). In the first Republican primary debate, held in August of 2015, Trump himself reiterated that being anti-P.C. would be the hallmark of his political life, declaring, "I don't frankly have time for total political correctness."

It's ironic, then, that perhaps Trump's greatest accomplishment so far as president is to make it OK—or maybe even mandatory—for his followers to engage in the worst excesses of political correctness, especially its attempts to shut down debate and heterodox opinions through bullying, appeals to ad hominem attacks, and unthinking "whataboutism."

Among the Trump faithful, there are never legitimate grounds upon which to disagree with anything the billionaire says or does. If Barack Obama's most strident defenders were sometimes quick to claim any criticism of him was racist, thereby delegitimating honest disagreement, Trump's supporters are equally quick to denounce any dissent as proof positive of secret membership in Antifa, a pro-Hillary voting record, or a desperate attempt to look good among the communists who run the much-discussed-yet-little-seen Washington, D.C. cocktail party circuit.

And thus it has come to pass that the president of these United States, who hates political correctness at his very core, didn't "frankly have time" to immediately and unambiguously denounce by name violent right-wing protesters in Charlottesville, Virginia who last week carried torches and Nazi flags (complete with swastikas) around town while chanting "Jews will not replace us" and the Hitlerian slogan of "blood and soil." Sure, Trump had time to talk to the public. But even after a car ran into a crowd of counter-protesters, killing one and injuring 19 others, the president only issued a statement vaguely condemning "this egregious display of hatred, bigotry and violence on many sides, on many sides." Reportedly pushed by advisers, including his daughter Ivanka, he eventually called out the Ku Klux Klan, neo-Nazis, and white supremacists specifically and boldly averred that "racism is evil, and those who cause violence in its name are criminals and thugs." Within a few hours of delivering those remarks to generally poor reviews, even among his fellow Republicans and conservatives, the president whined via Twitter that "once again the #Fake News Media will never be satisfied…truly bad people!"

But the president wasn't finished with disquisitions on Charlottesville. He called a press conference on August 15 at which he rendered his second, explicitly anti-Nazi statement inoperative by stressing the presence and violence of left-wing protesters, the bias of the media, and the pressing need to preserve statues commemorating Confederate war heroes (a cause that was not mentioned in the posters recruiting protesters for the Unite the Right rally).

As Allahpundit of the conservative site Hot Air summarized:

Short of [Trump] overtly endorsing the alt-right, which he can't do (I think?), I don't know what more he could have said here to make them happy. He stressed that not everyone who was at the demonstration in front of the Robert E. Lee statue on Friday night was a white nationalist, that some perfectly decent people were part of the group. This group? The one carrying torches and chanting things like "blood and soil" and "Jews will not replace us"?

Trump's last comments on the matter drew praise from former KKK leader David Duke, who tweeted "Thank you President Trump for your honesty & courage to tell the truth about #Charlottesville & condemn the leftist terrorists in BLM/Antifa," and ethno-nationalist Richard Spencer, who texted The Atlantic's Rosie Gray to gush, "Really proud of him."

Is it politically correct to expect the president of the United States to unequivocally denounce the racial theories and violence of neo-Nazis and white supremacists? For Donald Trump and his supporters, the answer is unambiguously yes and so even libertarian critics of the president who are unsurpassed in their contempt for collectivist racial theories and their defense of free speech (something Trump himself is not so good on) must be attacked for calling out Nazis as stupid, bigoted, and, well, definitionally un-American (didn't we fight a war against Nazism?). Don't you understand, Trump's supporters insist, that we need to fight progressives with the same tactics they use? If you hold him to basic standards of decency, competence, or comportment, they continue, you're as bad as the left (typically defined as libertarian-leaning Republican Sen. Jeff Flake and anyone to his left).

That sort of thinking may keep Trump happy and insulated in the Oval Office and his fans energized and ill-tempered online, but it also means there will over time be fewer and fewer of them. In fact, Trump's approval ratings, never good to begin with, continue to set negative records. According to Marist, just 35 percent of Americans approve of the job he is doing and his support among Republicans has dropped 12 percentage points since June, to a new low of 79 percent. It seems unlikely that Republicans, who voted overwhelmingly for him, would be bamboozled by media bias, doesn't it? Perhaps Trump's falling approval rating has less to do with President Obama, the press, or the supposed power of Black Lives Matter to somehow cloud our minds and more to do with his inability to get much of anything done, to turn around the economy (the recent claim that he created an "unprecedented" number of jobs in the first six months of his presidency is flatly wrong), or to speak bluntly and honestly to the American people. On that last score, a recent poll for CNN found that just "36% of respondents said Trump was honest and trustworthy, while 60% answered that the description 'does not apply.'"

Yeah, yeah, I hear you already, Trump's P.C. loyalists: CNN is biased, what about all the people killed by Black Lives Matter at its rallies (zero, in truth), your gal HILLARY CLINTON would have been worse, why aren't you condemning Antifa and left-wing violence (been there, done that, and will continue to do so)!?!?

You are playing not a dangerous game so much as a losing one (as Trump's adviser Steve Bannon says, the alt-right is filled with "losers" and "clowns"). "The Left" is hardly ascendant in American life, especially if you use the imprecise measure of the number of Democrats who hold office in the United States; certainly Democrats in Congress aren't the reason why the GOP and the president can't produce balanced budgets, entitlement reform, or market-oriented health-care legislation. (Of course, from a libertarian viewpoint, we've got plenty of statists around, but they hail from all points on the conventional political spectrum, and that's a different argument altogether.)

Confidence in major American institutions (including the presidency and Congress, held by the GOP) are at or near historic lows and Trump's brain farts on Twitter and at press conferences aren't the tonic needed to change any of that. You're forgetting that most Americans actively despise left-wing political correctness for all the ways that it chokes off even the possibility of meaningful debate about all sorts of issues that matter to us all. Far from wanting a right-wing variant that squelches discussions before they can even get going, we want a social sphere we can talk honestly, work toward common ground, and agree to disagree.

You're not offering any of that, which helps explain why your man in the White House's numbers are sinking. Nor are you offering a positive vision of the future. Instead, you're merely standing athwart over Confederate statues, free trade, and economic innovation, and continuing ethnic diversification yelling Stop! Good luck with all that, but when you fail, please remember not to blame anyone but yourselves. For a change.