Don't Be Fooled. Airstrikes Are War.

Despite evidence they may make things worse, airstrikes are mistakenly seen as a perfectly reasonable response. 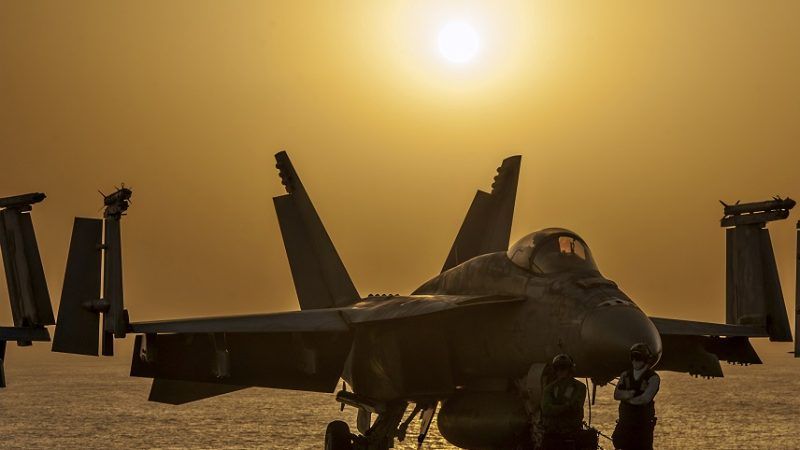 It is a bizarre and dangerous quirk of American politics that U.S. airstrikes are accepted as a moderate step between diplomacy and war.

Take a look at the Philippines, where Secretary of State Rex Tillerson said Monday the United States may begin airstrikes against local Islamic State-linked militants. Does this mean we're at war in the South Pacific? I suspect most Americans would say no. It's "just" airstrikes, after all. It is by that same calculation we are not "at war" in Yemen, Pakistan, Somalia, or Libya—all countries that have been subject to U.S. airstrikes this year.

Or consider new poll results published by the Chicago Council on Global Affairs. Participants were asked what response they would support to North Korea's development of nuclear weapons. Options ranged from inaction, negotiation, sanction, broader sanction, airstrikes on nuclear facilities to boots on the ground.

The real point of the survey, our dangerous quirk, wasn't the percentage of support for each of the various options, but that airstrikes are presented as some sort of intermediate option, somehow substantially different from more conventional warfare.

What we ignore at our peril is that airstrikes are war, as is evident with a moment's reflection. Dropping bombs on foreign territory is warfare whether we talk about it in those terms or not.

This defining statement is not as pedantic as it may seem. Washington has a well-established history of using sloppy language in civic conversation to pull fast ones on the public. Former President Obama was a master where airstrikes were concerned: By prioritizing air war over ground troops, Obama was able to pay lip service to his campaign-era promises of reform and restraint while, in reality, maintaining and in some cases escalating the very interventionist foreign policy he was elected to repudiate.

During Obama's final year in office, the United States dropped more than 26,000 bombs in seven nations (Afghanistan, Iraq, and Syria, and the four listed above), though for only for three of them (Afghanistan, Iraq, and Pakistan) did the executive branch have anything even remotely resembling congressional authorization for war required by the Constitution.

There are many reasons for that failure of basic procedural accountability—congressional fecklessness and presidential overreach not least among them—but the inaccurate way we think of airstrikes as War Junior is surely one of them.

With President Trump in Obama's place, the consequences of our messy conception of airstrikes grow more serious still. In his first half-year in office, Trump has ordered airstrikes at five times Obama's incredible pace. That escalation, coupled with this week's announcement about the Philippines (not to mention April's strike on regime targets in Syria, the first of its kind), suggests we are due to see more airstrikes against more targets in more places in days to come.

Whether those strikes are necessary, prudent or right are subject to debate. There is a long history of warnings from U.S. military and intelligence officers plus independent studies that airstrikes exacerbate security threats by radicalizing ordinary people who have lost innocent family members to American bombs.

As conservative columnist Jim Antle has argued, "Just like government stimulus spending might end up hurting the economy, Obamacare might cancel your health insurance, welfare policies might prolong a cycle of poverty, military interventions aimed at killing terrorists might actually create them."

These unintended consequences deserve more serious consideration than short-sighted politicians have been inclined to give them. Airstrikes are a form of war. That isn't up for debate. This means we must demand the same constitutional due process and oversight, realistic risk analysis, and open deliberation about our aims and interests that we ought to require before more traditional war-making.

Airstrikes are not a step to war but war itself, and it is time we acted—and demand Washington do its job—accordingly.