'Humans of Freedom Fest': Portraits from the Largest Annual Gathering of Libertarians

Meet some of the people who convene in Vegas every July to discuss and debate "Free Minds and Free Minds." First in a series. 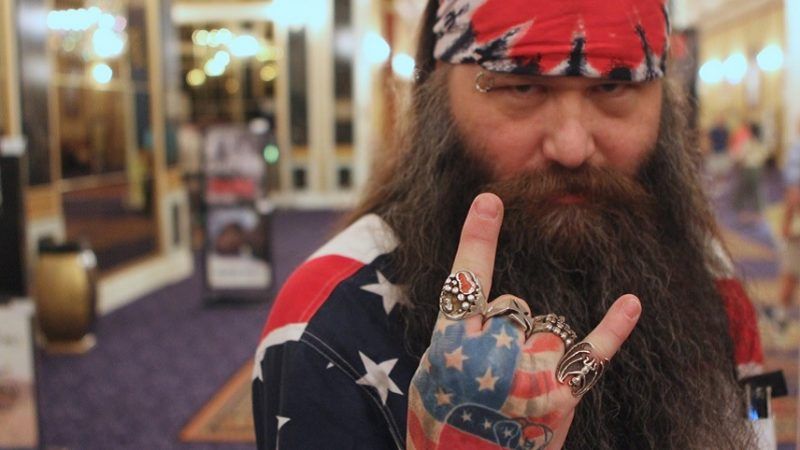 Editor's note: FreedomFest, held every July in Las Vegas, is the largest annual gathering of libertarians in the country. Today is the first day of the four-day long conference, which is being headlined in its 10th year by William Shatner, John Stossel, Greg Gutfeld, and others. Taking inspiration from the site Humans of New York, Reason is happy to offer Humans of FreedomFest, a series of portraits and brief interviews with various attendees. This is the first installment.

"This hand and this tattoo is in more pictures with celebrities than anybody else's hand or tattoo. I've got the most famous GOP tattoo."

Are you the black sheep of the family?

"Oh yeah. My dad was a Marine and a Democrat. And he was one of those guys who voted because of my mom, so his vote wouldn't be canceled out. I've been a conservative and a hippie for most of my life."

"My dad couldn't make it to this year's [FreedomFest], so I came with [my cousin's Jaden's] family. I earned my money so I could come."—Roy Lee (above, right)

You earned your money so you could come?

"I work. I do a little bit of flooring. Construction. I'm helping pay for gas. Paying for food."

"Our parents teach us to be individuals."—Jaden

What is your most controversial opinion?

"Among the general public? Eliminating the Federal Reserve. Among libertarians? I'm not a huge open-borders guy. There's a joke that if you get five libertarians in a room, you'll get 10 opinions."