The president's Warsaw speech takes a paranoid view of internal threats while downplaying the central role that international exchange has played in the rise of the West. 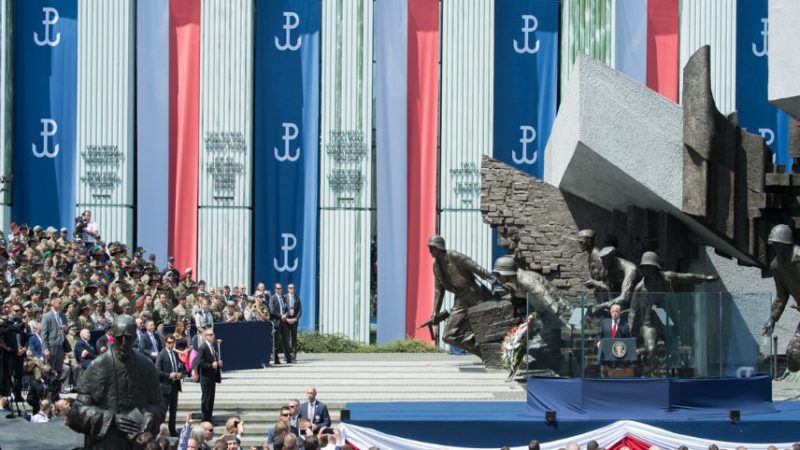 "I declare today for the world to hear that the West will never, ever be broken," President Donald Trump vowed near the end of his doctrine-defining speech today in Warsaw's Krasinski Square. "Our values will prevail, our people will thrive, and our civilization will triumph."

Set rhetorically and physically against the backdrop of Poland's inspiring courage and perseverance in the face of long adversity, Trump's address, at turns apocalyptic and motivational, was an attempt to summon similar will to the shared project of defeating radical Islamic terrorism. "Together let us all fight like the Poles: for family, for freedom, for country, and for God," he said.

But Trump's policy recommendations for this clash of civilizations were disproportionately inward-looking, borderline paranoid; and his depiction of what constitutes "Western" values was cramped and incomplete. The foundation of the modern "West" as applied to Europe is about more than just faith and family and NATO (the latter of which the president was careful to emphasize in this Russophobic, alliance-loving former satellite state). Free Europe as we know it was built upon free trade, and as Donald Trump will hear earfuls about over the coming days, his mercantilist, zero-sum views on international exchange threaten to inflict harm on the very civilization he aims to protect.

To confront the "oppressive ideology" of expansionist Islam, the president today pointed largely to immigration policies, surely music to the ears of the Polish government, which, like those in Hungary and Austria, is currently taking flak from the European Union for refusing to admit relocated refugees. "While we will always welcome new citizens who share our values and love our people," Trump said to applause, "our borders will always be closed to terrorism and extremism of any kind…. We cannot accept those who reject our values and who use hatred to justify violence against the innocent."

Trump then identified two other sources of trouble that threaten to erode western resolve: the "destabilizing activities" and "support for hostile regimes" by nearby Russia (which may or may not have been target of the immediately preceding paragraph, which covered "propaganda, financial crimes, and cyberwarfare"), and also…well, would you believe bureaucracy?

Finally, on both sides of the Atlantic, our citizens are confronted by yet another danger—one firmly within our control. This danger is invisible to some but familiar to the Poles: the steady creep of government bureaucracy that drains the vitality and wealth of the people. The West became great not because of paperwork and regulations but because people were allowed to chase their dreams and pursue their destinies.

This is where not just Trumpism, but a whole lot of libertarianism and conservatism, collides into a paradox. Trump is entirely right that the West became great in large part through "allowing every man to pursue his own interest his own way, upon the liberal plan of equality, liberty and justice," as Adam Smith put it in 1776, at the dawn of modern liberalism. This brilliant new idea in admittedly imperfect settings changed the world forever. "The boldness of commoners pursuing their own interests resulted in a Great Enrichment—a rise in Europe and the Anglosphere of real, inflation-corrected incomes per head, from 1800 to the present, by a factor, conservatively measured, of about 30," the economist Deirdre McCloskey wrote in these pages earlier this year.

So what's the paradox? In an E.U. setting, that the transnational body itself has been the single most effective mechanism for reducing barriers to trade and movement throughout the bloc. Americans look at Brussels and imagine Bernie Sanders or Bill de Blasio, forever soaking the rich and telling farmers how to curve their bananas. But many Europeans recognize it as the body that dismantled state ownership of airlines and car factories, and allowed Polish plumbers to find work in Paris and London. As the Swedish economist Johan Norberg wrote here last year,

[W]hile many of the criticisms leveled against the E.U. for being too big, too costly, and intervening where it shouldn't may sound like familiar gripes in the United States, the E.U. and the U.S. federal government are in no way equal.

The E.U. commission has 33,000 employees—half the number employed by the U.S. Social Security Administration alone. The E.U. has no right to tax, and its budget is around 1 percent of the GDP of the E.U. countries, compared to around 20 percent in the U.S. […]

Most often, nationalists complain that Brussels is promoting a "neo-liberal" agenda that stops them from protecting their markets with tariffs and technical trade barriers and from subsidizing national champions and local industry.

Trump, like many libertarians and other free-trade proponents who nonetheless oppose tariff-reducing super-structures, does so in the name of preserving national self-determination. "Americans, Poles, and the nations of Europe value individual freedom and sovereignty," he said today. There's a reason why he expresses visible preference for the controversial, Euroskeptic governments in Poland and Hungary, as well as for similar though less successful political parties such as France's National Front. But unlike the Daniel Hannans of the world, the U.S. president (uniquely in post-war history) does not actually favor free trade, nor fully understand how it works, and so therefore inaccurately lumps its proponents into a conspiratorial mass of forces sucking vitality out of the West.

"We must work together to confront forces, whether they come from inside or out, from the South or the East, that threaten over time to undermine these values and to erase the bonds of culture, faith and tradition that make us who we are," he said ("South" means Middle East, "East" means Russia). "If left unchecked, these forces will undermine our courage, sap our spirit, and weaken our will to defend ourselves and our societies."

Pay close attention to what Trump is saying, and also not saying, here. Brussels bureaucrats threaten "to erase the bonds of culture, faith and tradition that make us who we are" (you can add the aforementioned "family" to that list as well). But does that really encompass what Americans or Poles or Europeans are?

No, it does not. Europeans and Americans also mix. We trade, we travel, we move, we mingle, we inter-marry. Such syncretism is foundational to our common culture. As yet another historian of the Great Enrichment, Matt Ridley, put it in Reason back in 2010, the post-1800 explosion of prosperity in Europe and America was due in strong part to "ideas having sex." Neither Amsterdam nor its former namesake in the colonies, Donald Trump's hometown, became rich by erecting tight controls on goods and humans.

The best parts of Trump's speech acknowledged that kind of dynamism, even while see-sawing it with respect for tradition:

We write symphonies. We pursue innovation. We celebrate our ancient heroes, embrace our timeless traditions and customs, and always seek to explore and discover brand-new frontiers.

We reward brilliance. We strive for excellence, and cherish inspiring works of art that honor God. We treasure the rule of law and protect the right to free speech and free expression.

We empower women as pillars of our society and of our success. We put faith and family, not government and bureaucracy, at the center of our lives. And we debate everything. We challenge everything. We seek to know everything so that we can better know ourselves.

Unfortunately, Trump's trade policies, in the name of safeguarding tradition, threaten to hobble the very innovation he otherwise champions. Meanwhile, the rest of the free world is preparing to move on.

"Japan and the European Union will hoist the flag of free trade high amidst protectionist trends," Japanese Prime Minister Shinzo Abe said at a news conference Thursday, announcing the outlines of a historic tariff-reduction pact with the E.U. The deal will create a trading bloc that rivals the NAFTA zone in size, with an increasingly multilateralism-averse United States on the outside looking in. E.U. Commision President Jean-Claude Juncker poured further salt in the wound: "Closing ourselves off from the world is not good for business, nor for the global economy, nor for workers. As far as we are concerned, there is no protection in protectionism." (Eurocrats are nothing if not awful with the pithy quotes.)

Trump's Warsaw speech, in conjunction with previous addresses in Riyadh and Little Havana, was clearly intended to lay down a strong foreign policy marker for this administration. In all three he stressed the need for other countries to take responsibility for their own regional security, a message sorely needed not just over there but back at home. There are plenty of unresolved incoherences left after all the verbiage, not least of which is where Russia fits into this sphere-of-influence, clash-of-civilizations world (indeed, Trump invited America's rival to "instead join the community of responsible nations in our fight against common enemies and in defense of civilization itself").

But most every positive instinct this president may have—against nation-building abroad, in favor of bureaucracy-slashing at home—could come to naught if he doesn't graduate his understanding of international exchange out of the 19th century, and recognize that classical liberalism is eradicating poverty all over Africa and Asia as well as in "the West."

"The fundamental question of our time is whether the West has the will to survive," Trump warned today, darkly. "Do we have the confidence in our values to defend them at any cost? Do we have enough respect for our citizens to protect our borders? Do we have the desire and the courage to preserve our civilization in the face of those who would subvert and destroy it?"

Here's a somewhat different, if related, question: Does Donald Trump have the confidence to keep running history's most effective anti-poverty machine? And can the thing keep humming along regardless of what the American president thinks? This week may provide a few more answers.