Which Republican Will Play Gandalf to Trump's Balrog of a Health Care Bill?

As the president throws the Freedom Caucus under the bus by reportedly calling the AHCA a "mean, mean, mean…son of a bitch," Rand Paul says he'll vote against any "new entitlements," and the swing vote shifts to…Ted Cruz? 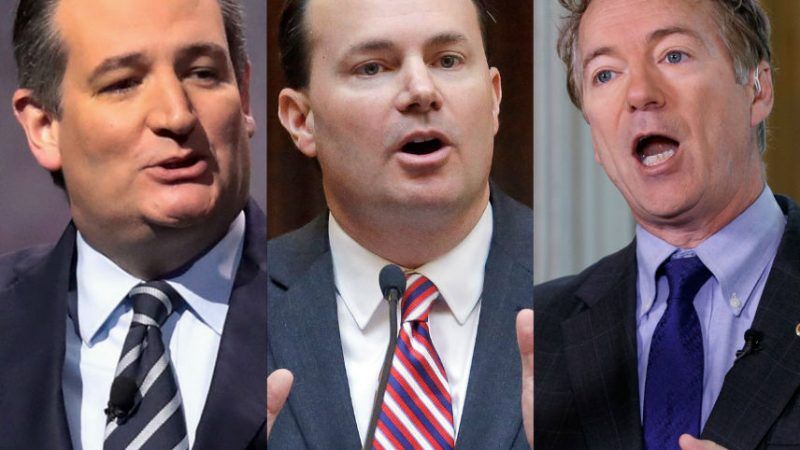 At a meeting with more than a dozen GOP senators Tuesday, according to anonymous attendees quoted by the Associated Press, President Donald Trump described the House version of the American Health Care Act (AHCA) as "mean, mean, mean," decorating his negative characterization with what the AP delicately termed "a vulgarity." (Jim Acosta later clarified that said phrase was "son of a bitch.") The president also reportedly said to the senators working on the secretive Obamacare revamp, "We need to be more generous, more kind."

This all doubtlessly comes as rude news to those 217 Republicans who pulled the lever for the impressively unpopular AHCA, particularly those in the fiscally conservative House Freedom Caucus (HFC) who held their nose and voted for an admittedly flawed bill (and process that produced it) in part to assuage a mercurial president who went after them collectively and individually after they'd scuttled a previous version. One day you're all smiles in the Rose Garden behind a POTUS crowing that this "great plan" is "very, very incredibly well-crafted," the next month he throws your loyalty under the bus just 17 months before you have to face an increasingly angry electorate.

Trump is clearly confident that he can similarly bully 50 of the Senate's 52 Republicans into line, despite the bill being (in the words of Reason's Peter Suderman, echoing the sentiment of many free-market health policy analysts) "almost entirely indefensible." The question is who, if any, are—unlike the Freedom Caucus at this point—willing to withstand Trumpian pressure? Who will resist the temptation to throw the hot potato to a bicameral conference committee?

Probably Rand Paul (R-Kentucky), for one. This afternoon, the libertarianish senator slammed the latest conception of the ephemeral bill, according to The Hill:

Paul denounced as "new entitlements" two core elements of the Republican bill in both the House and Senate: a refundable tax credit to help people buy insurance and a "stabilization fund" of money to help bring down premiums.

"I think we shouldn't have new entitlements that will go on forever in a Republican plan to fix healthcare," Paul told a small group of reporters. "We can't pay for what we already have: Medicare, Medicaid and Social Security."

Asked if he would vote "no," Paul said: "What I'm telling them is if they get to an impasse, come talk to me, because I'm more than willing to vote for a partial repeal if I can't get complete repeal, but I'm not willing to vote for new Republican entitlement programs."

Paul has taken some lonely stances against the administration's positions on Saudi arms sales, medical marijuana, indefinite detention, mandatory minimums, and more, so he would seem more temperamentally suited for opposition than most of his colleagues.

Since the GOP's moderate faction is reportedly warming up to the legislation, that leaves the more Freedom Caucusy/Tea Party types as the likeliest defectors. Sen. Mike Lee (R-Utah), for example, said two days before the Trump comments, and four days before the latest word that negotiators were looking to keep some Obamacare taxes in place, that he had "some grave concerns about what we're doing so far," and that "If we bring forward something that doesn't repeal Obamacare and doesn't bring down the cost of health care, that's probably something I won't be able to vote for [it]." The Utah senator was one of Trump's most withering GOP critics throughout the 2016 campaign, calling on the party's nominee to "step aside" just one month before the election.

So assuming Paul/Lee as no, that leaves a 50-50 split, with Vice President Mike Pence poised to be the tiebreaker. So who stands to be the swing vote? Would you believe…Ted Cruz?

According to a Washington Post report Tuesday, with Republicans increasingly writing off Paul and Lee, hopes now rest on the "fragile alliance between Senate GOP leaders and a man they have clashed bitterly with for years." Cruz, the famously disliked Texas Tea Partier who helped shut down the government over Obamacare funding in 2013 and called Majority Leader Mitch McConnell a liar in 2015, is shaping up to be the last, best hope for opponents and dealmakers alike. How's he leaning? "I've said from Day One that I want to get to yes," the senator, who unlike Paul and Lee faces re-election in 2018, told the Post. "The consequences would be terrible to fail."

Cruz has a more slippery record than his Tea Party Senate colleagues when it comes to Donald Trump and his own political ambitions: Recall that while running for president he knifed his good friend Lee in the ribs over a criminal justice reform proposal that Cruz had previously backed.

McConnell had previously said he hoped for a bill before July 4; that now looks to be pushed back to the end of next month. And the moderates are hardly overflowing with enthusiasm, either: Just this afternoon Sen. Lisa Murkowski (R-Alaska) told reporters she still hasn't decided. "I just truly do not know, because I don't know where it's going," she said.

One thing seems certain, though: The core group of Tea Partiers who have punched so far above their weight in national politics since entering the Senate will be smack dab in the middle of the most momentous legislative fight of Donald Trump's presidency. Bring popcorn.

Related video from January: "5 Republicans Liberals May Learn to Love in the Trump Era."