A War on Teachers? Let's Hope So. 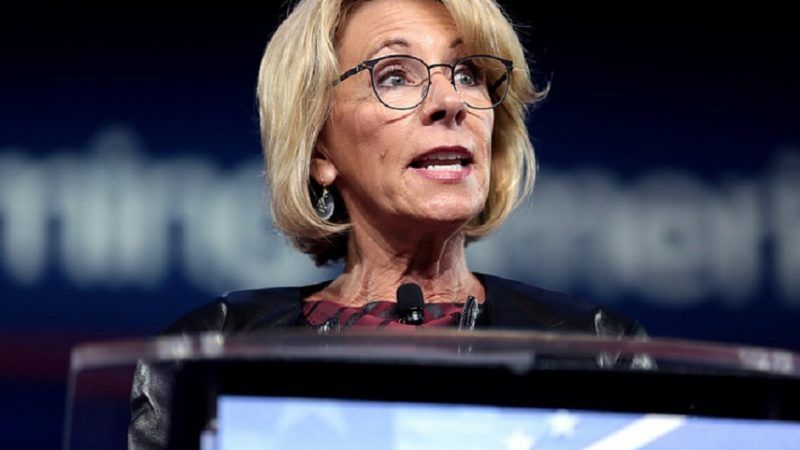 "Are Trump and DeVos waging a war on teachers?" asks the Center for American Progress (CAP). A little reading reveals that by "teachers," the painfully establishmentarian CAP means one-size-fits-few, government-run institutions. Given that such institutions have spent decades waging their own sort of hostilities against children, innovation, and choice, we should certainly hope that the new Education Secretary has some sort of pushback in mind to give kids a better chance at a real education.

What gets CAP so hot and bothered is that Secretary Betsy DeVos is a fan of allowing families to make decisions about their children's education with something like the freedom they exercise when deciding on food, clothing, housing, and most other areas of life.

"Providing choices to parents promotes increased involvement in their children's education and empowers them to seek out the schools and services that best meet their children's unique educational needs—no matter their zip code, the color of their skin, their family's income, or their own educational backgrounds," she told the Senate Appropriations Subcommittee on Labor, Health and Human Services, Education and Related Agencies last week.

That, and the Trump administration has proposed (don't hold your breath for it to happen) to cut the Department of Education's budget by 13 percent and slightly reduce the federal role in education. DeVos explained these changes to the committee as the result of exasperation that the D.C. behemoth has failed to improve learning after years of wasted effort by bureaucrats who "tried top-down accountability systems driven by rigid rules and requirements, incentivized the adoption of the Common Core, and mandated the implementation of prescriptive school improvement models."

And she has a point.

"The latest global snapshot of student performance shows declining math scores in the U.S. and stagnant performance in science and reading," the Associated Press reported this past December, citing the 2015 Program for International Student Assessment, which looked at students from 70 nations.

Is that because government was too tight-fisted, as CAP and its allies would have it? Not so much.

"The performance of 17-year-olds has been essentially stagnant across all subjects since the federal government began collecting trend data around 1970, despite a near tripling of the inflation-adjusted cost of putting a child through the K–12 system," a 2014 Cato Institute study found.

But what about the federal role in all of this? Too tiny?

Federal spending per student experienced "a 117 percent increase" between 1984 and 2014, adjusted for inflation, Politifact acknowledged in the course of parsing Rep. David Brat's (R-VA) claims about rising education spending.

That means decades of rising expenditures on government schools, and stagnant results at best for students.

So, what does work?

It's worth noting that there's no one magic bullet, but allowing families to choose how their children are educated means that they can select options that please them, and abandon those that don't. Unsurprisingly, all options that parents can select–including private schools, charters, and homeschooling–are preferred over public schools by Americans when they're asked about their levels of satisfaction.

"Students in poverty, black students, and those who are English language learners (ELL) gain significantly more days of learning each year in both reading and math compared to their traditional public school peers," according to a 2013 study.

"Detroit charter schools are producing significantly greater gains than traditional public school alternatives — gains that are only slightly smaller than those in New Orleans," writes Jay P. Greene, head of the Department of Education Reform at the University of Arkansas.

And families are voting with their feet.

Homeschooling looks like a successful strategy, too. Homeschooled students "score, on average, at the 84th to 89th percentile" on tests according to Brian Ray of the National Home Education Research Institute.

Unsurprisingly, the option is growing in popularity. From 1.1 million kids in 2003, the ranks of the homeschooled increased to 1.8 million in 2012—and an estimated 2.3 million last year.

Vouchers—a favorite strategy of Betsy DeVos that allows families to use their allotments of public education funding on the schools of their choice—also seem to produce results. While controversial, in part because they often come with strings attached, voucher programs in cities including Washington, D.C., and New York have apparently improved education outcomes, including graduation rates. "Our analyses revealed positive effects on math scores for children who applied to the program from certain types of schools—those with average test scores below the citywide median," researchers said of New York City's efforts.

Vouchers can have particular importance for families with children who have learning disabilities, and who need tailored education rather than the cookie-cutter offerings of traditional public schools.

Obviously, not all education options are successes. But when schools attended by children of families free to shop for options fail, those families can leave them behind to look for something better. That's important because "early research suggests that school closures may work as advertised, in that they steer students toward higher-performing schools," NPR reported last year.

But forget families trapped in faltering government institutions and a federal government that intrudes and spends with no positive results. CAP complains that DeVos "proposes eliminating the Public-Service Loan Forgiveness Program. This program provides aid to borrowers in public-service jobs, including government organizations, tax-exempt nonprofit groups, and teachers in public schools." And the organization complains that, after a visit to a Washington, D.C. school, "she criticized the school's teachers, claiming that they seemed to be in 'receive mode.'"

Receive mode for student loan subsidies from the taxpayers, maybe?

Honestly, Betsy DeVos's alleged war against failing, government-run institutions looks more like a modest insurgency against a long-established occupying force. She proposes to ease "teachers'" grip on the country's children a tad, only so families can choose other teachers who will get the job done. That's not much of a "war" when it comes down to it—not like, say, completely dissolving the unproductive federal Department of Education.

Which, given the record so far, is an escalation in this supposed war for which we should all hope.