Armless Droid Calls Cops After Being Assaulted by Drunken Man

The future of human-robot relations is silly and sensible, not sinister.

Katherine Mangu-Ward | From the July 2017 issue 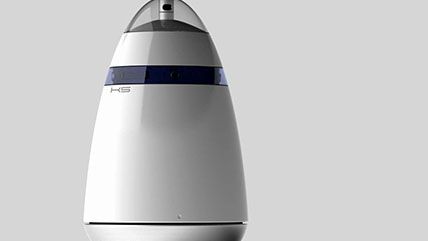 It was 8:15 p.m. and Jason Sylvain was drunk. When the 41-year-old man encountered Knightscope's 300-pound K5 security droid doing laps in the company's Mountain View parking lot, things didn't go well—for either of them.

The large, pyramidal robot can't have been easy to overturn. But Sylvain, whom a police spokesperson later described as "confused, [with] red, glassy eyes and a strong odor of alcohol emit[ting] from him," persevered.

Upon finding itself topsy-turvy, the unarmed bot did what anyone would do: It called the cops and hollered for help. In response to the K5's siren, Knightscope's vice president of marketing, Stacy Stevens, rushed out of the company's HQ and nabbed the assailant. Stevens later told CNET that the sloshed Sylvain "claimed to be an engineer that wanted to 'test' the security robots." He added, "I guess he now has his answer."

Knightscope rather insistently compares its weaponless 5-foot-tall robots to the loveable and heroic R2D2. But they really look more like Daleks, the heavily armored aliens best known by their Doctor Who catchphrase "Exterminate!" And there has been one reported incident in which a K5 arguably violated Isaac Asimov's First Law of Robotics by "injuring a human being or, through inaction, allowing a human being to come to harm."

Last year in a Silicon Valley shopping center, a toddler had a run-in with a "K5 Autonomous Data Machine (Machine Identification Number 13)." The 18-month-old boy sustained a boo-boo after an encounter with Paul Bleep, mall cop. Details are unclear, but in hilariously dry technical language, Knightscope's official statement gently suggests that the victim, young Harwin Cheng, may have tripped over his own feet: "The machine's sensors registered no vibration alert and the machine motors did not fault as they would when encountering an obstacle."

Is "the machine's sensors registered no vibration alert" the robot equivalent of "the suspect was resisting arrest"? Maybe. But while body cams on human security agents are not yet universal, the whole point of the K5 droids is that they record and broadcast everything they do, generating meticulous records. Regardless, the company pulled the bots to work on an update, which was undergoing testing when Sylvain stumbled onto the scene.

Knightscope rents its robots for between $6.25 and $7 per hour—less than minimum wage, a price point that's not coincidental. The K5 is ready and willing to take a job that Americans just won't do, or at least a job that Americans won't do at the wages that the law mandates companies must pay them.

In the headquarters of Microsoft, Uber, and other corporate clients, K5s do pretty much what a civilian security guard would: mosey around looking moderately menacing while listening and watching for anything out of the ordinary. The droid uses lasers, GPS, thermal imaging, and a super-fast license plate scanner where a human being would use his ears and eyes. Also similar to the human guard, the bot's primary weapon is its phone. But the K5 never loses its temper or calls in sick. And it's much, much cheaper.

There's no doubt that higher minimum wages are encouraging automation. Just ask the members of the joke Facebook group "Robots for a $15 Minimum Wage." In February, the burger chain Wendy's announced plans to outfit 1,000 locations with automated ordering kiosks. "Last year was tough; 5 percent wage inflation," CEO Bob Wright told investors and analysts earlier this year. Then he noted that demand for kiosks was very high among the company's franchisees—small businesspeople who are struggling with increased labor costs.

But daily stories chronicling the rise of automation in response to wage increases typically take a hysterical tone, as though automation itself were an evil to be avoided—root cause of social dysfunction rather than a rational response to increased labor costs with some positive side effects.

Tax proposals even exist to impose duties on robots to pay for the disruption and perhaps to slow down their adoption. In February, European Union lawmakers debated (but ultimately rejected) a proposal to tax robot owners to fund job training programs. And Bill Gates recently told Quartz, "Certainly there will be taxes that relate to automation.…Some of it can come directly in some type of robot tax. I don't think the robot companies are going to be outraged that there might be a tax. It's OK."

Encouraging automation with a high minimum wage for humans and then taxing the robots that result is like saying that immediately after you consume a ton of cocaine, you should inject a little morphine, just to be safe. While there's a certain appeal to the idea of a fiscal policy speedball, it's probably hubris to think you're going to successfully pull off the balancing act for long.

Let's be clear. Automation is good. It increases productivity. It makes stuff cheaper. It frees up people to work in other areas where they will provide more value. The fact that it's happening now demonstrates only that wage regulations have unintended consequences, not that robots are bad.

And minimum wage or not, robots perform lots of jobs humans were never going to do in the first place, jobs that make other humans' lives better. You can't ask a person to sit in a tiny box for 24 hours a day handing out $20 bills or sodas or cigarettes. ATMs and vending machines are inherently automated services.

In my neighborhood in Washington, D.C., food delivery droids are an increasingly common sight. They're part of a partnership between the courier app Postmates and Starship Technologies, an Estonia-based company started by two of the founders of Skype. The goal: Keep the cost of delivery below a buck, thereby encouraging people who would have just made a grilled cheese at home to get their cheap, tasty, solo dinner delivered instead. No tipping, no human interaction, low cost.

I typically see a member of the city's 20-bot fleet puttering down the wide, relatively smooth sidewalks of 16th Street. The 35-pound coolers on wheels have small orange flags attached, poking up at pedestrian eye level to help avoid collisions. The droids navigate and store information about traffic signals, terrain conditions, and more, and can be unlocked with a smartphone app at their destination.

At first glance, you might think they're rolling solo, but a closer look typically reveals a minder. These human attendants aim for nonchalance, though in reality, they end up being about as unobtrusive as Malia Obama's Secret Service detail at Coachella.

But once the testing period is over, these droids will travel alone, monitored only by internal systems and (in the event of theft) several different tracking devices. If they get in trouble, there is a human being on call, but he's probably in Estonia or somewhere similarly far-flung.

There never was a delivery guy who was going to work for a buck plus no tips, minimum wage or not. This isn't a job lost to the robots. Likewise, there used to be no such thing as a human robot safety monitor, either locally or remotely. That's a new job that didn't exist before this task was automated. The same is true for the engineers, monitors, and auditors of Knightscope's droids.

In case you were wondering: The parking lot K5 survived its encounter with minor scratches. Sylvain faces prowling and public intoxication charges, but none for assault or battery.