The United Nations' 'Lords of Poverty'

The foreign aid industry is a racket. 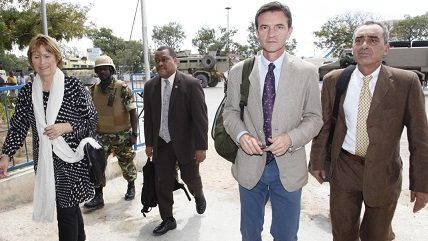 In 2004, I attended a gathering of African libertarians in Mombasa, Kenya. Our goal was to discuss economic reforms that sub-Saharan Africa needed in order to achieve higher rates of growth and a greater reduction in poverty. In many a developing country, taxi drivers are founts of wisdom, and so I struck up a conversation with the man who drove me from the airport to the hotel. When he asked me what brought me to Kenya, I responded that I was partaking in a conference about economic development. My taxi driver shook his head and muttered, "You all fly here for a few days, stay at the nicest hotels, and nothing ever changes."

Our hotel in Mombasa was nothing special and libertarian gatherings are not, as a general rule, opulent affairs (especially in Africa!), but my brief conversation with the Kenyan taxi driver was instructive. Clearly, he assumed that I was a part of the travelling circus of thousands of officials from aid agencies, international organizations and NGOs, who enjoy business-class travel to some of the world's most exotic destinations, where they are housed and dined at the taxpayers' expense.

To wit, consider a recent story from the Associated Press, which found that the United Nations' World Health Organization "routinely spends about $200 million a year on travel—far more than what it doles out to fight some of the biggest problems in public health including AIDS, tuberculosis or malaria." According to the WHO's internal documents, which were obtained by the AP, "staffers are breaking the rules by booking perks like business class airplane tickets and rooms in five-star hotels."

"On a recent trip to Guinea, where WHO director-general Dr. Margaret Chan praised health workers in West Africa for triumphing over Ebola," the AP found, "Chan stayed in the biggest presidential suite at the Palm Camayenne hotel in Conakry. The suite has an advertised price of 900 euros ($1,008) a night."

Some aid specialists, including the inestimable William Easterly, who is the Professor of Economics at New York University and co-director of the NYU Development Research Institute, have long complained about this sort of behavior. In his 2007 book, The White Man's Burden: Why the West's Efforts to Aid the Rest Have Done So Much Ill and So Little Good, Easterly drew the readers' attention to the aid establishment's ineptitude in stimulating growth in poor countries and attempting to implant Western institutions "from the top down."

Graham Hancock's 1994 book, The Lords of Poverty: The Power, Prestige, and Corruption of the International Aid Business, is still worth reading. As the author explains, much of foreign aid is used to subsidize opulent lifestyles within the aid establishment. "Only a small portion of [aid money]," Hancock writes, "is ever translated into direct assistance. Thanks to bureaucratic inefficiency, misguided policies, large executive salaries, political corruption, and the self-perpetuating 'overhead' of the administrative agencies, much of this tremendous wealth is frittered away."

President Donald Trump is said to be considering large cuts to foreign aid. Those cuts cannot come soon enough. But Trump should take his reform agenda (provided that it is genuine) a step further and order a thorough audit of our international commitments. American membership in hundreds of international and supra-national agencies should be evaluated on a cost-benefit basis (I volunteer to sit on such a panel and wield an axe on behalf of the U.S. taxpayer) and withdraw from ineffective or outdated organizations. That, alas, is the only way to put an end to the travelling circus of the Lords of Poverty.

P.S.: For those interested, I tried to summarize the most pertinent arguments against foreign aid in a 2009 Cato paper, "The False Promise of Gleneagles: Misguided Priorities at the Heart of the New Push for African Development."