Compromise waters down worst parts, but it still screws with students. 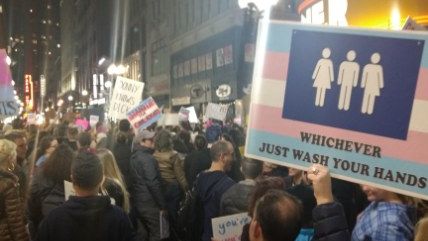 Texas' state senators have succumbed to transgender bathroom panic. But the bill they just approved isn't as bad as it could have been.

Over the weekend, Republicans in the state Senate added an amendment to SB2078, a bill overseeing how public and charter schools manage hazards and emergencies. No, they're not classifying transgender students as hazards or emergencies. But the amendment does order that students use the public school facilities (bathrooms, locker rooms, etc.) of their biological sex. The schools may also offer private unisex single-occupancy facilities.

The amendment has nothing to say about private facilities operated outside the public school system, either to mandate accommodation or to forbid it. Nor does it attempt to tell Texas municipalities what sort of antidiscrimination or public accommodation laws they may pass. The decision not to overrule city laws makes the Texas bill less expansive than the controversial bathroom law that North Carolina passed last year (and then partly rescinded in March).

Compare that to Senate Bill 6, the legislation some Texas state senators and the lieutenant governor were pushing earlier this year. That bill would have mimicked North Carolina's rule banning cities from expanding their own antidiscrimination laws. It would have required people in all government buildings (not just schools) to use the facilities of their biological sexes. It would have authorized the state's attorney general to sue schools and get civil judgments and fines ranging from $1,000 to $10,500 from districts that weren't enforcing the rules. And it would have increased the penalties for a whole host of crimes—including nonviolent offenses, such as prostitution—if they took place in bathrooms or changing rooms.

None of that stuff made it into the new amendment, which was approved on mostly party lines. (One Republican opposed it.) The attorney general is authorized to sue school districts to enforce compliance, but the law no longer includes any financial incentives to do so. The law also specifically states that it doesn't authorize the school district to "disclose intimate details about a student." One fear about laws forbidding transgender accommodation is that their enforcement could potentially "out" transgender students to those who didn't know.

This would still be a bad law, since it strips back the individual's right to control his or her identity in relationship with the government. A better choice would be for the government to accommodate transgender students and then offer more options to all comers, regardless of their biological sex, if they are uncomfortable with the status quo. And then leave the private sector to figure out its own solutions (which will probably do a better job than the government of appeasing all sides).

The bill now heads back to the House and Senate for new votes, and the governor will probably sign it by the end of the week. Then we'll see if Texas will faces boycott threats like the ones we saw in North Carolina.