Stephen Humphries | From the June 2017 issue 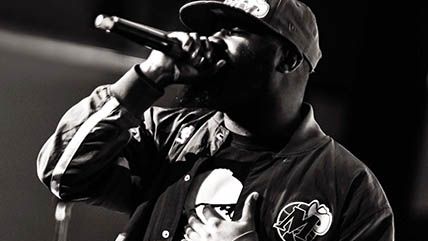 It starts out as a typical music video. A camera follows a rapper into an abandoned warehouse, where artists thrash their heads in time to a Richter-magnitude rock riff. But this is no ordinary rap-metal group. For starters, the song is called "Statism." Listen closely and you'll hear the emcee, 27-year-old self-identified anarcho-capitalist Eric July, railing against handouts and arguing that taxation is theft. His band is Backwordz, and it recently signed to Stay Sick Recordings, a record label launched by Chris Fronzak of the immensely popular metalcore band Attila.

Q: Tell me about your upbringing.

A: It's just a typical story: Young black kid, no father around, ends up being a knucklehead. My mother was working two or three jobs at a time just for me. I was getting in trouble a lot. She put me in [a school in another town]. She gave me her car to drive me out there. It's funny, because we talk about school choice. We had to go through back ways to get admitted into a school by using other people's addresses.

Q: Backwordz has been described as the libertarian Rage Against the Machine. To his credit, Rage's guitarist, Tom Morello, has criticized Obama for "war crimes" and "drone murders" and has been vocal in his support of Edward Snowden.

A: There are things that we can absolutely say, "hey man, we agree." But if you start talking about minimum wage…Tom was out there performing for $15 per hour. No. We don't need to raise it; we need to get rid of it.

Q: What do you think about the Civil Rights Act?

A: I have a problem with forcing people to be segregated. I also have a problem [if] you're telling people what to do with their private property.…It's a bad [law], because it means that racist private business owners gotta hide. Now I have to give you money because I don't know that you're a racist. I would much rather that he had a sign on the door that says, "We don't sell to blacks."

Q: You've criticized liberals for viewing themselves as "superior to black people."

A: It's a bigotry of low expectations because they think black people are too stupid to figure out themselves how to live peacefully or how to live without being poor. If people understood self-ownership, they would realize that they can better their own life. [Libertarian economists] Walter Williams and Thomas Sowell have done a great job of highlighting that what the welfare state does is incentivize people to fail. If you get above that line, we take everything away from you. You stay below it, we'll pay for your housing, your food. Communities have no incentives to build their own solutions—market solutions—because the state is being mommy and daddy.

Q: How does your Christianity inform your political views?

A: Who nailed Jesus to the cross? The state! We can argue that the people who feared Jesus used the state to get him killed. The devil went up on a mountaintop and said, "All this is mine." He was talking about all the kingdoms. I would argue that earthly government is the last thing I should be supporting as a Christian.

Q: In your publicity photos, you wear a baseball hat that says, "Taxation is theft."

A: If I'm on stage and people are looking at me, I might as well have something on that will make them think. Music is nothing more than a vehicle to drive home our message.

This interview has been condensed and edited for style and clarity. For a longer version, go to here.

Stephen Humphries is a Boston-based journalist covering music and movies.