Donald Trump Has Destroyed the Credibility of the Presidency

There is no longer any reason to trust anything the president or his surrogates say. 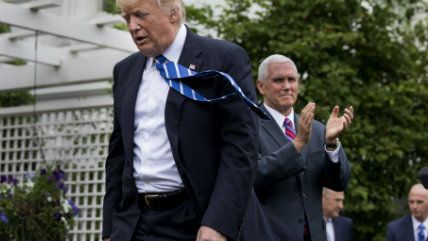 Shortly after multiple outlets published reports last night that President Donald Trump had shared highly sensitive, classified information about an ISIS plot with Russian officials in an Oval Office meeting last week, White House officials stepped up to respond with denials. The denials were hard to believe because Trump has destroyed the credibility of his office.

The most extensive denial came from national security advisor General H.R. McMaster. "The story that came out tonight, as reported, is false," he said. "At no time were any intelligence sources or methods discussed and no military operations were disclosed that were not already known publicly."

One reason the denial is difficult to completely buy is because it is so precisely worded. McMcaster does not actually deny the core of the initial report in The Washington Post: that President Trump conveyed classified details of an ISIS plot, shared by a foreign intelligence partner, including the location from which those plot details emerged. As a post at Lawfare notes:

Perhaps tellingly, McMaster delivered the statement from a prepared text, and did not take questions. The format in which it was delivered, in other words, left no opportunity for expansion, clarification, or follow-up.

McMaster's denial is also difficult to believe irrespective of the particular wording. That's because both President Trump and senior White House officials have demonstrated over and over again that they will lie to the press and the public.

Consider the story that the White House spun last week after the firing of FBI Director James Comey. Press Secretary Sean Spicer initially said that the firing was a direct result of a memo sent by Deputy Attorney General Rod J. Rosenstein outlining Comey's faults, and a related recommendation from Attorney General Jeff Sessions that Comey be terminated.

"It was all him," Spicer said, referring to Rosenstein. "No one from the White House. That was a DOJ decision." This explanation was repeated by Vice President Mike Pence and Senior Advisor Kellyanne Conway. Pence also denied that the ongoing FBI probe into the Trump campaign's possible connections to Russia were in any way related to the firing.

But within days, Trump himself made clear that none of this was true. The Russia investigation was on his mind when he made the decision to fire Comey. "When I decided to just do it I said to myself, I said, 'You know, this Russia thing with Trump and Russia is a made-up story,'" he said in an interview with NBC.

The story that Trump's senior staff and surrogates had fed to the press in order to explain the president's actions was not true. Trump had revealed his staff to be liars.

In another way, this was less a revelation and more a confirmation of what we already knew about Trump and his communications style.Whether on important issues, such as the Comey firing, or on more trivial matters, such as Trump's inaugural crowd size or the continued existence of a Trump-branded steak business, neither President Trump nor his representatives can be trusted. The Trump team has constantly misled the public, and appears to have done so knowingly.

At this point, then, it is impossible to believe anything the White House says about any story of any level of importance without further confirmation. The White House has lost all claim to the presumption of truth.

There may be a useful lesson in this for a press corps that, in previous administrations, has sometimes been too willing to passively accept statements made by administration officials as accurate, when they are obviously shaded or shaped to serve those in power. There is some value in maintaining a level of distrust between the president and the press, and in hammering home the idea that powerful politicians should not—and indeed cannot—be trusted. Trump is building a much-needed incredulity into the media.

And yet there is also a real danger in a White House that is so patently untrustworthy, and a president who lies so frequently and so carelessly.

On a granular operational level, Trump's lack of credibility is a hindrance to effective governance and policymaking, to making government work in a way that is more honest, more transparent, and less corrupt. Trump styles himself a dealmaker, but creating lasting working relationships of the sort that make a difference in the world of policy and politics requires committing to a level of trust and openness that Trump and those in his employ have utterly decimated.

The same goes for Trump's relationship with the public, which is, in an important way, a negotiating partner in any democratic government. Trump, as the senior most figure in American government, is not only destroying faith in his own word and policies, but in the American system itself. His lies help sow systemic distrust that goes beyond his own words.

Trump's disdain for the truth makes him a poor partner, both and at home and abroad, since those he works with can have no expectation that he will keep his word, or that what he is saying at any given moment is accurate.

This should cut across partisan lines. Those who were (justly, in my view) outraged by the lies President Obama told about his health care law should be equally outraged by the Trump administration's even balder and more frequent falsehoods now.

All of this is further compounded by Trump's demonstrated ignorance about both the issues and procedures he must engage with as president. Yesterday's reports about Trump's Oval Office disclosures have generated speculation that they were somehow the product of hidden connections between Trump and Russia. But it is just as possible that Trump, who reportedly ignores the multi-page briefing sheets intended to prepare him for such meetings, did not understand the importance of the information he revealed, or the procedures that typically govern the release of classified information.

Which means that we must contend with the possibility that Trump's relationship with the truth is even more disconnected than common forms of politically expedient evasions, exaggerations, and lies. Trump may make false statements because he simply does not know or care what the truth is.