Freedom Caucus Republicans Criticize the Obamacare Revamp They Voted for

Justin Amash, Mark Sanford, and a half-dozen others describe AHCA as a "marginal" win that will hopefully be improved in the Senate. 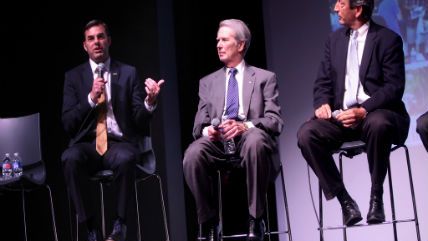 So how did the libertarian Rep. Justin Amash (R-Mich.) end up justifying his controversial vote for the American Health Care Act (AHCA), which, as noted (and sniffily disregarded) by The Week's Damon Linker, has been roundly slammed by libertarians? By writing, as he always does, a Facebook post (duly characterized by the Washington Post's Amber Phillips as "tortured"). The cheery opening sentence: "This is not the bill we promised the American people."

Amash then goes on to explain his thought process more fully:

When deciding whether to support a bill, I ask myself whether the bill improves upon existing law, not whether I would advocate for the policy or program if I were starting with a blank slate. In other words, the proper analysis is not whether it makes the law good but rather whether it makes the law better. In this case, I felt comfortable advancing the bill to the Senate as a marginal improvement to the ACA.

Read the whole thing for more in that vein. But for the purposes of this post I'm actually more interested in Amash's smack-talk. Because one of the more striking things about this historic 217-213 vote is how many of its all-Republican supporters have been willing to acknowledge that it really ain't all that. First up, more Amash:

The AHCA repeals fewer than 10 percent of the provisions in the Affordable Care Act. It is an amendment to the ACA that deliberately maintains Obamacare's framework. […]

Many have questioned the process that led up to the vote on May 4. I have publicly expressed my disgust with it. The House again operated in top-down fashion rather than as a deliberative body that respects the diversity of its membership. […]

[T]he ACA will continue to drive up the cost of health insurance—while bolstering the largest insurance companies—and the modifications contained in the AHCA cannot save it. Many of the AHCA's provisions are poorly conceived or improperly implemented. At best, it will make Obamacare less bad.

Below, some other Trumpcare critiques from yes-voting members of the House Freedom Caucus. As with Amash, click on the links for the whole context, which invariably includes more positive sentiments.

* Steve Pearce (New Mexico): "It still has deep flaws – you could find a dozen reasons to vote against it."

* Rod Blum (Iowa): "I have always said the process was bad….It was rushed. There should have been hearings."

[U]ltimately the vote came down to one simple question: do we kill the bill and stop the debate from advancing to the Senate — or not?

In its original form back in March, my vote was indeed to kill the bill. It was rushed and not ready. With the three amendments that came after my and others' efforts to shut down the bill, it's my belief that it was at least worth letting the Senate debate it. […]

In short, this week's vote means simply that you and I will be talking about this issue for months to come, and I earnestly look forward to those conversations and the learning that will come with them.

The congressman said the bill "fell far short of what I wanted" but saw it as a necessary evil of sorts.

"I just came to the conclusion that, given the circumstances that we're in, that it would hurt us far worse not to see it pass than it will to pass it[.]"

* Jim Jordan (Ohio): "This is the best bill we can get out of the House…But frankly, we should be clear this is not repeal of ObamaCare. If it was repeal, you wouldn't need the option for a waiver option for states to seek. So, we have to be clear with the voters about that, and continue to work on it."

* Scott Perry (Pennsylvania): "While it's important to recognize the American Health Care Act does not repeal the Affordable Care Act in full, it is a first step, albeit an imperfect one."

* Evan Jenkins (West Virginia): "This was a tough call….Is it a perfect solution? No….It goes to the Senate. Work will continue. Doing nothing wasn't an option."

There are, to be sure, more upbeat reactions from other Freedom Caucus members.

My strong hunch, now more than ever, is that the Freedom Caucus largely wilted in the glare of attention from President Donald Trump—which was at first very negative (especially toward intellectual ringleader/rebel Amash), and then bluff-callingly positive, in a YOU-write-the-damn-bill kinda way. As Caucus Chair Mark Meadows recently and tellingly said, "When you get a phone call from the president and that's followed up by a phone call from the president, followed up by a phone call from the vice president — it needs to get done." (And as Libertarian Party National Chair Nicholas Sarwark snarked, "Passage of the AHCA is an example of the broken Washington culture that says, 'We have to do something. This is something. We have to do this.'")

There were three basic assumptions required for Freedom Caucusites to get to "yes": 1) It will make the health care system incrementally better (Peter Suderman disagrees, FWIW). 2) Seven years of political grandstanding to the contrary, there is no hope of Congress actually replacing Obamacare. (As Amash put it, "it is increasingly clear that a bill to repeal Obamacare will not come to the floor in this Congress or in the foreseeable future.") Furthermore, 3) getting Freedom Caucus fingerprints on the thing is the only bulwark preventing whatever comes next from lurching significantly to the left.

On that last point in particular, the Freedom Caucus can certainly crow that its leader, Mark Meadows, has become the House's point man in AHCA discussions with the Senate. Better that than some squish from the Tuesday Group, members plausibly argue. What's more, they may have stumbled on a new blueprint for big legislative heaves in the Trump era: Go to the Freedom Caucus first.

But in that victory lies the seeds of defeat. If all it takes for a group of notorious "hardliners" to abandon many of their long-held principles is a little carrot-stick action from a president famous for his negotiating acumen, they may have effectively handed Trump a get-out-of-obstruction-free card. In the process they risk not just alienating their own hardcore base of fiscal and constitutional conservatives, but corroding the philosophical glue that has until now held a small unit together and allowed it punch far above its collective weight.

If the AHCA somehow manages to survive through Senate deliberations and the resulting negotiating process with the House, you may see many of the people quoted above voting against the very deal they made possible. Would the electorate then let them off the hook? Would members stay the course even if theirs was the swing vote and President Trump got super mean on Twitter? And could the Freedom Caucus survive in the face of such tumult? These are just a few of the questions.