A deeply unpopular bill, passed via untenable process, gets near-unanimous support from legislators who used to rail against such things. 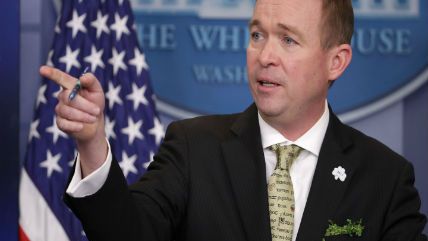 On Wednesday, in the run-up to today's historic vote in the House of Representatives to overhaul Obamacare, Office of Budget and Management Director Mick Mulvaney—a fiscal conservative and co-founder of the House Freedom Caucus—confidently predicted to radio talker Hugh Hewitt that the GOP would have more than enough votes to send a bill to the U.S. Senate.

"Everybody I talk to says yes," Mulvaney said. "All the folks I talked to who are no are yes. I think they're going to get everybody but one in the Freedom Caucus, and they might get that one."

You may have assumed that "that one" was the cantankerously independent and out-front libertarian Rep. Justin Amash (R-Mich.), but no: It was Rep. Andy Biggs (R-Ariz.). Amash voted yes. (I'm waiting to hear back from Amash's office for an explainer; HuffPost reporter Matt Fuller wrote that "leadership made him vote yes," whatever that means.) (UPDATE: See Amash's tweet at the bottom of the post.)

Peter Suderman detailed earlier today how this latest, most rushed version of the American Health Care Act laughably contradicted the tut-tutting process objections to Obamacare repeated for years by the likes of Rep. Paul Ryan (R-Wisc.). You'd expect that level of cheerful hypocrisy from the likes of such oily dealmakers as Ryan; but wasn't the more libertarian and principled Freedom Caucus supposed to be different?

Ha ha, no. Start with Mulvaney, whose most visible role with the Trump administration so far seems to be as an executive-branch enforcer on the Freedom Caucus, rather than as someone who does anything noticeable about budgetary gimmicks he has long opposed, such as reliance on Overseas Contingency Operations. Back in 2010, when Mulvaney was first campaigning for Congress, he declared that repealing Obamacare would be his "job one," telling The Gaffney Ledger "I do think we should debate health care," but that during the passage of Obamacare, "we did not do it as a country." So a few hours of gum-flapping on C-SPAN now qualifies as adequate debate?

Freedom Caucus Chair Mark Meadows (R-S.C.), who was dubbed by CNN back in September 2013 as "the architect of the government shutdown," held as one of his primary objections to Obamacare back then that Washington politicians were exempt from the law. "The only thing we asked…was that Congress and the President live under the same rules that you live under," Meadows told a gathering in South Carolina not long after the bruising 17-day standoff. "The Senate said they wouldn't pass it, and the President said that if it did get through the Senate that he would veto it. Well, guys, that's hypocrisy…and it's not right."

(Reminder: Republicans in 2013 held only the House; now they run the Senate and the White House, too.) UPDATE: Just prior to the final AHCA, the House passed an amendment that indeed got rid of this exemption, so score one for Meadows.

Why are Freedom Caucus members, who only yesterday were opposing the lousy budget agreement to increase federal expenditures, chucking their principles aside for a flawed bill they probably haven't read? Here's how Meadows puts it:

"What I'm saying is the vast majority of the people I serve will be better off," he said. "When you look at any change in legislation obviously to make an assumption that everyone is going to be better is not an accurate statement.…My job as a legislator is to make sure to improve the situation."

That's one explanation. Allow me to take a speculative if informed stab at an additional one.

After the first Ryancare failed to even make it to a vote, President Trump tweeted that "The Freedom Caucus will hurt the entire Republican agenda if they don't get on the team, & fast. We must fight them, & Dems, in 2018!" A few days later his director of social media took aim at Justin Amash, calling him "a big liability," and urging Republicans to "defeat him in a primary." Don't kid yourself: The bully pulpit worked, with Rep. Ted Poe (R-Texas) resigning from the Freedom Caucus almost immediately, and work beginning shortly thereafter on legislative negotiations featuring the obstructionists front and center.

The truth is that Donald Trump generally inspires more positive passion in GOP-held congressional districts than the local congresscritters themselves. When the more popular guy soaking up all the national political oxygen singles out the hometown rep as a stick-in-the-mud, the incentives change. The Freedom Caucus is already among the least popular blocs in the House. When the president called members' bluff, essentially saying "OK, you didn't like Paul Ryan's plan, so how about making one of your own?", they had strong motivation to at least pin the eventual reform's failure on some other scapegoat.

In these calculations, I suspect Vox's Ezra Klein is correct: "Republicans don't want the AHCA to pass. But none of them want to be the cause of its failure." If this indeed was the goal, you can see why ramming this through is a necessity, rather than an obstacle: Let the damn Senate deal with the bill's unpopularity and poison pills; we've already proven we can play ball with the president!

As for those libertarian-leaners who prefer to fly solo rather than join caucuses that by definition take part in politically motivated compromises?

The AHCA is like a kidney stone- the House doesn't care what happens to it, as long as they can pass it. #sassywithmassie

So now the hot potato moves to the Senate, where the Republican majority is slimmer (52-48), the number of GOPers who didn't endorse Donald Trump is in the double digits, and where the early reporting suggests they won't even take up the House bill. Sen. Rob Portman (R-Ohio) is already against the House AHCA, Sen. Rand Paul (R-Ky.) said the Freedom Caucus changes only made the bill "less bad," and pretty soon today's earth-shaking exertions will look more and more like disposable theater.

Read Peter Suderman on the policy of the just-passed bill. As for the politics, it seems to me a truism remains: Congressional Republicans are terrified of their own base, and prefer above all else not to govern.

Tough vote today. I decided only after I had read and understood the entire bill. A lot of exaggeration from both parties about its effects.

I used every minute up to the vote to consider all aspects. Traveling home from D.C. right now. Working on longer piece to explain decision. https://t.co/1UMXsIm5os