They paper over the fact that America enjoys extraordinary latitude when choosing how to interact with the rest of the world. 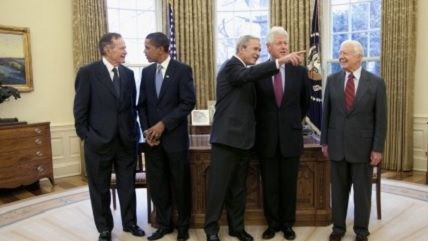 We have been hearing a lot about the Trump Doctrine, lately. A week ago, for example, Reince Priebus, the White House Chief of Staff, said that "President Trump's decision to launch cruise missiles at Syria in response to a deadly chemical attack was part of a new 'Trump doctrine' governing his foreign policy." The president, Priebus continued, "is really establishing… a Trump doctrine in setting some certain lines of where we're not going to allow people like [Syrian President Bashar] Assad to go, but at the same time making it clear that we're not interested in long-term ground wars in the Middle East."

Whether Trump's foreign policy views amount to a coherent doctrine is doubtful. Let's not forget that candidate Trump railed against bombing of Syria when President Obama occupied the Oval Office. Similarly, Trump promised to declare China to be a currency manipulator on "day one" of his presidency, only to reverse himself later. Other flip-flops include Trump's attitude to Russia. The president, famously, wanted a good relationship with Putin, but soured on the Russian strongman following the U.S. bombing of Syria—Russia's ally. He also changed his view on the relevance and utility of the North Atlantic Treaty Organization, which he once saw as "obsolete," but now considers a "bulwark of international peace."

Of broader relevance, I think, is the existence of presidential doctrines in the first place. Since the Truman Doctrine at the start of the Cold War, America's foreign policy establishment, not to mention the rest of the world, awaits with bated breath the permutations of U.S. foreign policy each time America swears in a new Commander in Chief.

Will the United States "pay any price, bear any burden… to assure the survival and the success of liberty" (Kennedy Doctrine) or will it "look to the nation directly threatened to assume the primary responsibility of providing the manpower for its defense" (Nixon Doctrine)? Will America live with communism (détente) or roll it back (Reagan Doctrine)? Are we a country of regime-changers and nation-builders (Bush Doctrine) or do we avoid doing "stupid shit" (Obama Doctrine). One never really knows what the new guy will do, but we assume that it will be different from what the previous guy did.

This is a weird way to conduct foreign policy. Nations, typically, don't have "doctrines." They have national interests. The British national interest, sticking close to America and preventing Europe from being dominated by a single power, does not change depending on the monarch or the prime minister. The French national interest (to annoy the Americans, even if it means cozying up to Russia) does not change whether Francois Mitterrand or Jacques Chirac walks the corridors of the Élysée Palace. And the Russians will stop at nothing to keep their access to the Black Sea (Crimea) and the Mediterranean (Syria).

One possible way of explaining the changing priorities of U.S. foreign policy is that America is actually relatively secure. It dominates the Western Hemisphere, where it has no competitor, and is separated from most of the world's major hot spots by two vast oceans. Our foreign policy, in other words, is dominated less by our vital national interests and more by the whims our ruling class.

Murder of "beautiful babies," which motivated Trump's bombing in Syria, was an act of inhumanity. But going after Assad, who is fighting a war against the Islamic State savages, did not further American national interests in any meaningful way. Our presidential doctrines, in other words, paper over the fact that America, unlike any other state in modern history, enjoys extraordinary latitude when choosing how to interact with the rest of the world. That is our blessing and our curse.