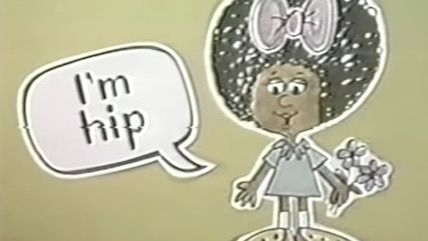 For your "They Used to Do Children's Television Differently" files, here's a moment from the '70s show Vegetable Soup. Produced by the New York State Department of Education from 1975 to 1978, this multicultural-themed series aired on both PBS and NBC; the scene embedded below celebrates black slang. Not a bad idea for a segment. But at the 1:01 mark they casually throw in an expression that these days would've been vetoed long before the show got to air:

For the full episode, which originally aired in 1975, go here. For a nightmare-nostalgia look back at the surreal and disturbing side of the show, go here. For past editions of the Friday A/V Club, go here.