Trump, Like His Predecessors, Refuses to Call Armenian Genocide a 'Genocide'

At least he's not flagrantly breaking a solemn campaign promise, like Obama and many others did 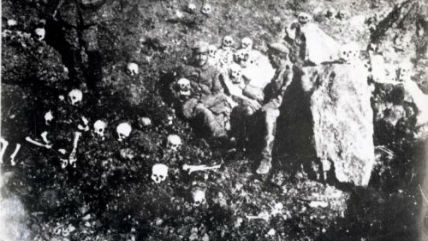 Today is Armenian Genocide Remembrance Day—or, as it has been known by the U.S. government since 1975, National Day of Remembrance of Man's Inhumanity to Man. That linguistic downgrade is symbolic, as the political drama around April 24 ever since has been whether the U.S. president will finally, in his Remembrance Day message, risk incurring the wrath of key NATO ally Turkey by calling the century-old Turkish-perpetrated genocide a "genocide."

In a statement just before noon, President Donald Trump carried on the tradition of his predecessors by declining to use the G-word:

Today, we remember and honor the memory of those who suffered during the Meds Yeghern, one of the worst mass atrocities of the 20th century. Beginning in 1915, one and a half million Armenians were deported, massacred, or marched to their deaths in the final years of the Ottoman Empire. I join the Armenian community in America and around the world in mourning the loss of innocent lives and the suffering endured by so many.

As we reflect on this dark chapter of human history, we also recognize the resilience of the Armenian people. Many built new lives in the United States and made indelible contributions to our country, while cherishing memories of the historic homeland in which their ancestors established one of the great civilizations of antiquity.

We must remember atrocities to prevent them from occurring again. We welcome the efforts of Turks and Armenians to acknowledge and reckon with painful history, which is a critical step toward building a foundation for a more just and tolerant future.

Trump's statement is almost indistinguishable from what Barack Obama said in 2016. But at least Trump, unlike Obama (and Hillary Clinton, and Samantha Power…and John Kerry, and George W. Bush and Bush's dad) didn't make pious promises on the campaign trail to at long last call genocide by its proper name, only to sell the Armenian diaspora down the Bosphorus within months of gaining power.

There is no doubt that replacing the phrase "mass atrocities" with the word "genocide" would cause a tremendous amount of upset in bilateral U.S.-Turkish relations, given how much of Ankara's diplomacy is bent on this one issue. (Turkey categorizes the Armenian dead as casualties of war rather than victims of targeted ethnic slaughter, and does not take kindly to anything that sullies the reputation of Kemal Ataturk, the post-Ottoman founder of the country.) There is also no significant doubt among historians that what happened from 1915-24 was indeed a genocide.

I have long argued that the promise-breaking on this issue by humanitarian interventionists such as Power (whose nickname used to be "genocide chick") illustrates a fundamental paradox at the heart of both neoconservatism and the Responsibility to Protect: In order to uphold the high-minded principles you are invoking while attacking another country, it becomes logistically necessary to flagrantly violate them.

Trump, who campaigned on a set of foreign policy ideas that fall much closer to the tradition of realism, demonstrates in his continuation of his predecessors' policies a truth about realpolitik: It is situational and transactional on its face. You can't be a hypocrite if you dispatch with the idealism up front.

Is there another option? In the real world, probably not. Nonetheless, I prefer the Vaclav Havel-influenced approach of former U.S. ambassador to Armenia John Marshall Evans, a career diplomat who was shepherded into retirement after daring to utter the G-word: Just call things by their proper names. Pathologies tend to compound over time when indulged instead of confronted. And yes, those include pathologies nurtured in Washington as well.

I am very sorry that, during our time in office, we in the Obama administration did not recognize the #Armenian Genocide