Trump Is a Green Light for Illiberal Rulers Like India's Modi

The loss of liberalism in America will be costly for persecuted minorities elsewhere. 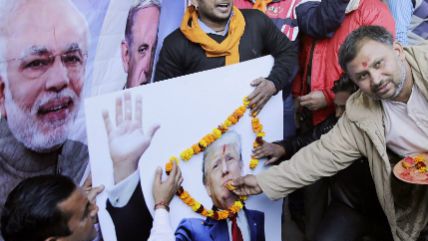 They say that when America sneezes, other parts of the world catch pneumonia. That certainly seems to be the case in India, where President Trump's anti-Muslim attitude is

Last month, Indian Prime Minister Narendra Modi appointed Yogi Adityanath, the country's most vitriolic anti-Muslim Hindu priest, as chief minister (the governor) of Uttar Pradesh, the state that houses the world's greatest Muslim monument, the Taj Mahal. This is tantamount to appointing the grand wizard of the Ku Klux Klan the governor of Illinois — and would have been simply unimaginable without Trump in the White House.

What's most distressing about this is that America is clearly losing its soft power to spread pluralism, tolerance, and other liberal values by its example. Instead of remaining a beacon for protecting vulnerable minorities, Trump's America seems to be turning into a giant green light for minorities' persecution around the world.

Modi rose to power three years ago because he promised Indians, frustrated with the glacial pace of growth, that he'd turn their country into a Hong Kong-style economic powerhouse. But he is an ardent Hindu nationalist, and the fear has always been that he is less serious about development than foisting a retrograde version of Hinduism on India. He cut his political teeth in the RSS, the militant wing of his Bharatiya Janta Party, whose sole reason for existence is inciting the country's majority Hindu population against Muslims and other minorities. Modi hailed the 1992 destruction of Babri Masjid — a 16th-century mosque in Uttar Pradesh — by a Hindu mob as a great "awakening" against Muslim invaders who allegedly planted the structure on the birthplace of the Hindu god Ram to taunt Hindus. Ten years later, after he became the chief minister of Gujarat, his state witnessed one of the worst Muslim pogroms in recent history. More than 1,000 Muslim men, women, and children were ruthlessly slaughtered.

Since he assumed national office, Modi has traded open incitement against Muslims for a posture of strategic ambiguity, communicating with his Hindu followers through pregnant silences. When BJP's Hindu "cow vigilantes" (Hindus regard cows as sacred) hauled out an aged Muslim man from bed and bludgeoned him to death for allegedly eating beef, it took Modi several days to issue a lame condemnation (Yogi Adityanath, on the other hand, vociferously defended the killing and even recommended that the dead man's family be prosecuted for possessing the meat). Modi has done nothing to squelch BJP's baseless claims that Muslim men are using "love jihad" to spread their faith by deliberately seducing Hindu girls. Nor has he done a thing about his party's efforts to browbeat Muslims and Christians into converting to Hinduism in large mass public ceremonies. He did, however, declare Christmas "good governance day" when government employees would be required to work while leaving all official Hindu holidays unmolested.

In Uttar Pradesh, India's most populous state, Modi ran a two-pronged campaign in recent state elections, emphasizing his message of economic prosperity for all before mixed audiences while whipping up Hindu grievances before Hindu crowds. For example, he accused the deposed ruling party of buying Muslim votes by giving free handouts to Muslims but nothing to Hindus. So diabolically effective was Modi's message that the BJP won 325 out of 405 seats in the state legislature simply by unifying the Hindu vote, till now deeply divided along caste lines.

Still, the hope was that after his resounding victory, Modi would start pulling back from his divisive rhetoric. But Yogi Adityanath's appointment suggests that the mask is finally coming off, and Modi is preparing to launch a much more aggressive phase of Hindu nationalism.

Adityanath, who commands a huge Hindu following in his state, has pledged not only to build a temple where the razed mosque stood but also place statues of Hindu gods in every Muslim mosque. But that's not even the worst part. He makes no bones about his ethnic cleansing agenda and speaks openly about the need to reduce Uttar Pradesh's 40 million-strong Muslim population — about 20 percent of the total — by at least half. Nor is he shy about how he plans to accomplish this. He reminds Hindus of their duty to "take out 100 Muslim girls for every Hindu girl they take out" and kill "100 Muslims for every Hindu they kill," and taunts those who have moral qualms as "eunuchs." Such incitement, which is by no means his worst, has landed the yogi, who obscenely ran on a law-and-order agenda, in jail a few times.

Trump's calls for a Muslim ban and "extreme vetting" have emboldened men like Adityanath, who has repeatedly recommended similar steps in India — except that he doesn't have in mind wimpy measures like creating a Muslim registry or barring Muslims from only a few countries. Indeed, within a week of assuming office, he had already embarked on a campaign of anti-Muslim harassment, shutting down and burning "illegal" slaughterhouses, and throwing 650,000 predominantly Muslim men out of work.

For now, however, Muslims don't have to fear what Adityanath does so much as what he doesn't do — namely, protect them from private harassment and violence by the Hindu thugs his campaign mobilized. Indeed, in one town, pamphlets started circulating the day after his appointment asking Muslims to leave by year's end. "If you do not do so, we will do things in this village, similar to what Trump has been doing in America because Uttar Pradesh will now have a BJP government," it reads. "So decide soon because you are no longer suitable for this village." This might simply be a horribly ill-advised prank, as the police claim, but it nevertheless signals a major shift in India. And should a Muslim retaliate to the relentless provocation under Adityanath, the Hindu backlash might be explosive.

Trump is directly responsible for none of this, of course. But it is incontrovertible that illiberal leaders around the world are emboldened by his example.

This is not merely because Trump has neither the interest nor the moral clout to call them out and deny them international respectability, something that Modi and others desperately crave. It is because the rest of the world sets its moral compass by looking at America. Most Americans don't fully appreciate this, but the moral progress that this country has made by invoking its own principles — liberty, justice, equality, tolerance, religious pluralism — to fight slavery, Jim Crow, and segregation has been the main driver of liberalism around the world over the last several decades. America has offered persecuted groups a moral vocabulary and a modus operandi for securing their rights and holding their regimes accountable.

If America can't hang on to its values while dealing with terrorism, economic downturn and other challenges, there will be little hope for the rest of the world. Modi's India may be the first domino to fall. But unless America does a fairly quick course correction, it won't be the last — or the ugliest.

This column originally appeared in The Week