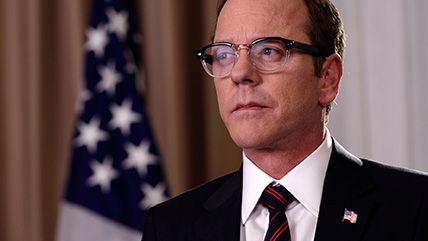 Designated Survivor, Kiefer Sutherland's follow-up to 24, imagines the actor as Tom Kirkman, a mild-mannered minor Cabinet member—he's the secretary of housing and urban development—catapulted into the presidency after nearly everyone else in the federal government is killed in a State of the Union night attack on the U.S. Capitol.

Debuting in September 2016, the first half of the ABC series has played out as almost as much of a libertarian fantasy as The West Wing's president was a progressive one. As Kirkman—who describes himself as "a registered independent"—works to find and punish the perpetrators, rebuild the ranks of the federal government, and restore some semblance of normalcy to America, he opposes rash militarization, eschews "enhanced interrogation," welcomes Syrian refugees, prizes practicality over partisanship, reveres due process, and has little time to focus on any but the most limited and essential of government functions.