And then showed up on the scene right before the attack 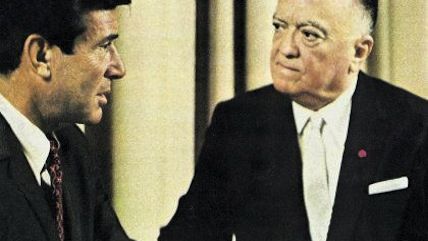 One of the FBI's favorite tools for nabbing would-be terrorists is a sting: The bureau finds a mark, stokes his interest in carrying out some sort of attack, draws him into a plot, and then arrests him. Every time one of these busts hits the press, I wonder how long it will be before we learn about a perp who takes the FBI's encouragement to heart but decides to launch or join a separate plot that the government doesn't control.

I had that on my mind as I read 60 Minutes' report on the Garland, Texas, attack of May 2015. In that incident, two men tried to shoot up a draw-Mohammed contest; fortunately, local police prevented them from killing anyone. "Not only had the FBI been monitoring [one of the gunmen] for years," 60 Minutes recounts, but "there was an undercover agent right behind him when the first shots were fired."

The shooter in question, Elton Ibrahim Simpson, had been the target of a previous FBI operation, in which an informant recorded him talking about wanting to fight overseas for Islam. That wasn't enough to send Simpson to jail—he got three years' probation instead—but the discovery that his mosque had spies in it did drive him away from the temple. The alienated Simpson and his roommate then reached out to ISIS about carrying out some sort of attack at home.

But ISIS wasn't the only organization that Simpson was in touch with. "After the trial," his attorney told 60 Minutes, "we found out that they had had an undercover agent who had been texting with Simpson, less than three weeks before the attack, to him 'Tear up Texas.'" The report continues:

The man he's talking about was a special agent of the FBI, working undercover posing as an Islamic radical. The government sent attorney Dan Maynard 60 pages of declassified encrypted messages between the agent and Elton Simpson—and argued "Tear up Texas" was not an incitement. But Simpson's response was incriminating, referring to the attack against cartoonists at the French magazine Charlie Hebdo: "bro, you don't have to say that…" He wrote "you know what happened in Paris… so that goes without saying. No need to be direct."

But it turns out the undercover agent did more than just communicate online with Elton Simpson. In an affidavit filed in another case the government disclosed that the FBI undercover agent had actually "traveled to Garland, Texas, and was present…at the event."…And this past November, Maynard was given another batch of documents by the government, revealing the biggest surprise of all. The undercover FBI agent was in a car directly behind Elton Simpson and Nadir Soofi when they started shooting.

Was it incitement? Judge for yourself. From the affidavit:

The FBI wouldn't speak with 60 Minutes, aside from an emailed statement denying that its agents had advance knowledge of the Garland plot. So we don't know their answers to the questions the show says it would have liked to have asked: "Did you have more communications with Simpson? How is it that you ended up coming to Garland, Texas? Why are you even there?" That isn't the first time the FBI has declined to talk about the topic. The bureau refused to answer some questions on the subject from the Associated Press earlier this year—and when a Daily Beast reporter inquired about the "Tear up Texas" text last August, an FBI spokeswoman just hung up the phone.

In the best-case scenario, the text was just one irresponsible but ultimately uninfluential remark to a man who was already ready to shoot people. But that would still raise the question of just why exactly anyone thinks this sort of encouragement should be a part of any police investigation. In the meantime, it wasn't an undercover G-man who stopped the plot; it was the local cops in Garland, who were there because they realized that this was the sort of event someone might try to attack.