Hacking Away at the Budget Is the Humane Thing To Do

It's a tragedy that President Trump didn't use this moment to try to cut more, and to cut the biggest unsustainable spending: Medicare and Social Security. 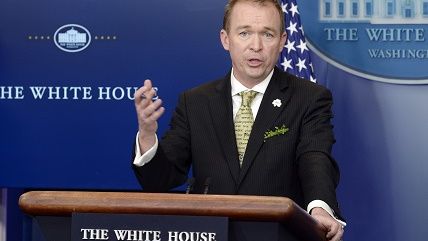 But Trump's cuts are good! Why do politicians always assume that government spending helps people? It always has unintended consequences.

Foreign aid is attached to idealistic notions like ending global poverty and making friends abroad. Politicians also thought that by rewarding countries that behave well, America could steer the whole world toward responsible practices like holding elections and allowing companies (especially U.S. companies) to operate without interference. The young nation of Israel could be propped up with money for its military defense and infrastructure projects.

But today, the U.S. sends money to friends and foes alike, and it's hard to know what those countries do with it. Israel gets billions of dollars—but we give even more money to Israel's enemies.

Money we give to impoverished nations seldom reaches the poor people we want to help. The funds routinely go to the kleptocrat governments that made those countries such horrible places to live in the first place. Our gifts prop up authoritarians, making it easier for them to avoid free market reforms.

We're just as dumb about spending at home.

The Department of Education doesn't teach any kids. It imposes standards on local schools that make it harder for them to experiment. It hires bureaucrats who do endless studies—instead of letting competition show us what teaching methods get the best results.

The Department of Education also promotes government-subsidized student loans that trick students into thinking that no matter which school they pick, no matter their major, they will graduate with useful, marketable skills. Many go deeply into debt just when they should be getting a start in life.

The Department of Agriculture tips American elections. Presidential candidates promise farm subsidies to try to win the early Iowa primary. Politicians say the subsidies will rescue struggling small farms, but they rarely do. Most of the money goes to big, well-connected agribusiness. They shouldn't get subsidies any more than other businesses should.

The so-called "war on poverty" has now cost almost $22 trillion, about three times what we've spent on all America's wars. Yet poverty endures, even as markets and technology should have eliminated most of it.

Before the war on poverty began, Americans were steadily lifting themselves out of poverty. The well-intended handouts increased dependence and stopped that natural progress. They perpetuated poverty.

Obviously, some federal programs do help people. When you spend trillions of dollars, some of it will be put to good use.

But that doesn't mean the Economic Development Administration, "Essential" Air Service, Community Services block grants or even Meals on Wheels deserve a penny more of your taxes.

"There is no magic money tree in Washington," the Cato Institute's Chris Edwards reminds us. At DownsizingGovernment.org, he lists many more programs that ought to be cut. Even when programs do good things, he says correctly, "It is more efficient for the states to fund their own activities—school and antipoverty programs—because doing so eliminates the expensive federal middleman."

Having our money back means being able to pay for things we choose as individuals—including helping out the poor more effectively than the government.

Finally, even areas where Trump wants to boost spending, like the military, should be cut. We spend more on defense than the next seven nations combined—China, Saudi Arabia, Russia, the United Kingdom, India, France and Japan.

Are we less likely to be attacked because of it? Less hated? No. Often, our expensive "defense" puts us in harm's way.

Trump and Paul Ryan do deserve credit for demanding that spending increases be offset with cuts elsewhere. But it's a tragedy that they didn't use this moment to try to cut more, and to cut the biggest unsustainable spending: Medicare and Social Security. Not addressing those entitlements today will mean more suffering for the poor and the elderly in the future.

Do the humane thing. Keep hacking away at that budget.