Apparently Tax and Spending Cuts are Either Too Small or Too Big, but Never Just Right

Advocates of ever increasing spending will never meet a cut they won't overreact to. 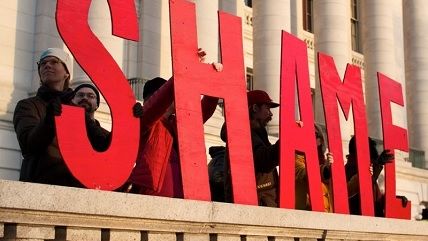 Donald Trump, the ultimate outsider and former liberal Democrat, and Ed Gillespie, the ultimate insider and GOP veteran, are about as different as two people in the same party could be. But when it comes to taxing and spending, opponents are giving them the same old business.

Last week Trump unveiled his budget outline, which jacks up military spending—though not nearly as much as critics allege: His Pentagon proposal is only 3 percent bigger than what Barack Obama sought. To offset his defense hike, Trump has proposed cuts in other domestic programs, from the Appalachian Regional Commission to the Weatherization Assistance Program.

The screams of liberal protest still echo through the hills. Some progressives have been horrified to learn the administration might eliminate agencies they had never heard of in the first place. And many have pointed out that the budgets for those and other agencies are, in relation to aggregate federal spending, minuscule.

The combined budgets of the National Endowments for the Arts and Humanities, complained one critic in Slate, "total under $300 million, which is less than 0.01 percent of the total federal budget." The Washington Post took this tack as well. When White House Budget Director Mick Mulvaney said the administration did not want to ask a coal miner or a single mom to pay for programs on the chopping block, the paper's fact-checker retorted with "A Coal Miner's Plight: Paying for Public Broadcasting Is Less Than a Dollar of His Taxes."

You get the point: Cuts to small agencies make no real difference—so don't cut them.

So does this mean Trump's critics favor big cuts that will make a difference? Perish the thought!

"Trump's Budget Is Pure Cruel Conservatism," says Rolling Stone, because it would have "devastating effects" on social programs. The left-wing website Common Dreams calls it "morally obscene" for the same reason.

"Cuts to education, labor, agriculture and many other departments of double digits," says a piece in U.S. News, amount to a budget that "has no soul."

Bottom line? Small budget cuts are bad—and big ones are absolutely heinous. Government must always continue to grow in every direction.

The same response greeted Ed Gillespie's tax proposal. The Republican candidate for governor of Virginia has rolled out a plan that would shave Virginia's tax brackets by 10 percent each, and eliminate three punitive business taxes. (Chief among those: the BPOL tax, which applies to gross revenue rather than net profit. Even Gov. Terry McAuliffe (D) was willing to get rid of that one.)

Democrats are not impressed. "The Gillespie campaign's proposal would give the top 1 percent almost $3,200 a year," the Democratic Party complained in an email blast, "while a family of four with an income of $50,000 would get just $246 and a minimum wage worker with two kids just $42."

Now, it's certainly true that tax cuts often benefit people who pay lots of taxes. It's pretty hard to avoid that dynamic. And it's doubly hard in Virginia, where the top tax rate of 5.75 percent applies to anyone making more than $17,000. The state badly needs to bring its brackets in line with economic reality.

Gillespie should have made his tax plan more progressive by proposing a tax rate of zero percent for anyone making less than $20,000, and progressively higher rates for everyone else. But would Democrats have been any happier?

Probably not. Consider the freak-out that greeted Gov. George Allen (R) when he proposed a $2.1 billion tax cut in 1995. Democratic House Majority Leader Richard Cranwell warned that Allen wanted to "take police officers off the street." Others called his proposal "mean-spirited" because "people will fall through the cracks." Don Beyer, the lieutenant governor, suggested Allen's tax cuts were "cruel" and "reckless."

Back then Virginia's biennial budget was around $35 billion, or $54 billion in today's dollars. Today the budget is, at $107 billion, nearly twice as big in real terms. And Gillespie's tax cut, less than half of Allen's in real terms, is quite modest: It would trim $1.3 billion from projected budget growth of $3.4 billion over five years.

So under his plan the state's budget would continue to grow—just not quite as fast. Yet the Virginia Democratic Party warns that "critical public services would be put at risk." This seems to suggest state spending not only must grow, it must grow at a relentless if not accelerating pace. There's a lot of that going around these days.