He stood for natural rights, racial equality, and economic liberty in a free labor system. At the heart of his worldview was the principle of self-ownership. 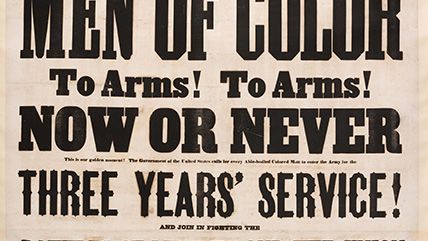 In November 1848, a socialist activist gave a speech at the 13th annual meeting of the Rhode Island Anti-Slavery Society. "Mr. Inglis" began his remarks well enough, reported the abolitionist leader Frederick Douglass, who was also there to give a speech that day, "but strangely enough went on in an effort to show that wages slavery is as bad as chattel slavery."

Douglass soon became infuriated with the socialist speaker. "The attempts to place holding property in the soil—on the same footing as holding property in man, was most lame and impotent," Douglass declared. "And the wonder is that anyone could listen with patience to such arrant nonsense."

Douglass heard a lot of arrant nonsense from American socialists. That's because, as the historian Carl Guarneri has explained, most antebellum socialists "were hostile or at least indifferent to the abolitionist appeal because they believed that it diverted attention from the serious problems facing northern workers with the onset of industrial capitalism." The true path forward, the socialists said, was the path of anti-capitalism.

But Douglass would have none of that. "To own the soil is no harm in itself," he maintained. "It is right that [man] should own it. It is his duty to possess it—and to possess it in that way in which its energies and properties can be made most useful to the human family—now and always."

Douglass favored the set of ideas that came to be known as classical liberalism. He stood for natural rights, racial equality, and economic liberty in a free labor system. At the very heart of his worldview was the principle of self-ownership. "You are a man, and so am I," Douglass told his former master. "In leaving you, I took nothing but what belonged to me, and in no way lessened your means for obtaining an honest living." Referring to his first paying job after his escape from bondage, Douglass wrote: "I was now my own master—a tremendous fact." This individualistic, market-oriented definition of liberty put Douglass squarely at odds with the socialist creed.

The abolitionist-turned-socialist John A. Collins offers a telling contrast. In the 1840s, Collins went on a fundraising trip to England on behalf of the Massachusetts Anti-Slavery Society. He returned home a devotee of the English socialist George Henry Evans.

The "right of individual ownership in the soil and its products," Collins declared, are "the great cause of causes, which makes man practically an enemy to his species." Collins now thought private property was the root of all evil.

He didn't remain much of an abolitionist after that. "At antislavery conventions," the historian John L. Thomas has noted, "Collins took a perfunctory part, scarcely concealing his impatience until the end of the meeting when he could announce that a socialist meeting followed at which the real and vital questions of the day would be discussed."

Perhaps the most significant left-wing attacks on the abolitionists were found in the pages of the socialist journal The Phalanx. "The Abolition Party," complained an unsigned 1843 editorial, "seems to think that nothing else is false in our social organization, and that slavery is the only social evil to be extirpated." In fact, The Phalanx asserted, the "tyranny of capital" is the real problem, because capitalism "reduces [the working class] in time to a condition even worse than that of slaves. Under this system the Hired Laborer is worked to excess, beggared and degraded.…The slave at least does not endure these evils, which 'Civilized' society inflicts on its hirelings."

When it came to attacking free labor, the socialists and the slaveholders adopted certain identical positions. For example, the South's leading pro-slavery intellectual, the writer George Fitzhugh, argued that free labor was "worse than slavery" because it meant that the capitalists were free to exploit the workers. The idea that "individuals and peoples prosper most when governed least," Fitzhugh wrote, was nothing but a lie: "It has been justly observed that under this system the rich are continually growing richer and the poor poorer." As for the pro-market writings of Adam Smith and others, Fitzhugh dismissed them as "every man for himself, and Devil take the hindmost."

Douglass, meanwhile, took a page from John Locke's notion of private property emerging when man mixes his labor with the natural world: "Is it not astonishing that, while we are plowing, planting, and reaping, using all kinds of mechanical tools, erecting houses," he marvelled, "we are called upon to prove that we are men!"

Having experienced slavery firsthand, Douglass had no doubt that free labor was infinitely superior to it.