Republicans have a risky multi-stage process in mind to take down the health law. 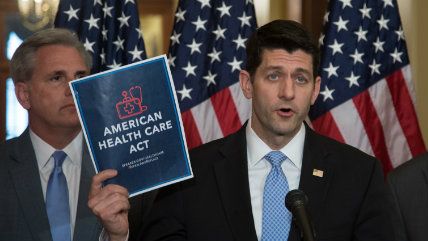 As House Republicans have rolled out their Obamacare repeal bill to widespread criticism, they have begun downplaying the importance of the legislation, saying that it is merely the first part of a multi-stage plan, potentially involving multiple bills and regulations, all of which will play a part in repealing and replace the law. "This is a three stage plan," Health and Human Services Secretary Tom Price said Tuesday, the same day that President Trump tweeted about "getting rid of state lines" in "phase 2 & 3" of the health care rollout.

Under this plan, rolling back the health law isn't so much a matter of a single bill as it is a sort of Obamacare Repeal Expanded Universe—a policy franchise that Republicans plan to execute over months or even years, the legislative equivalent of the comic book expanded universes that have taken over Hollywood.

There are reasons for this strategy, but also serious risks, and the GOP's adoption of this plan shows just how precarious the repeal effort is.

The main reason for the strategy is procedural. Republicans plan to skirt the 60 vote threshold in the Senate by passing their Obamacare repeal bill through the reconciliation process. That will allow them to pass a bill on a simple majority vote, but it also means that they can only address parts of the law with a direct budgetary impact—basically the tax and spending portions of the law.

But Obamacare is much more than taxes and subsidies. The bill also includes numerous regulations, including things like the law's essential health benefits, which require insurers to include certain coverage provisions. That's where step two comes in.

The second stage is to use executive branch authority to modify Obamacare's regulations—presumably in conjunction with new statutory language on the books following the Obamacare repeal bill. Under President Obama, HHS wrote thousands of pages of regulations governing the minute details of the Affordable Care Act's implementation; many of those regulations could be tweaked or unwound as part of this process.

Again, this is a team effort in which everyone plays a role: If the House and the Senate passing the repeal legislation are the Obamacare Repeal Expanded Universe versions of Iron Man and Captain America, the regulatory effort from the administration, which would likely be a joint project between White House senior staff and Tom Price's HHS, are something like Thor and the Hulk.

The final step, as always, is to keep expanding the universe as wide you can. That means going back to Congress where the plan would be to pass some unknown number of bills that would require 60 votes in the Senate. That, of course, means bringing Democrats on board. Right now, of course, Democrats in Congress are unified in opposition to any GOP health care plan. (They're basically running the same oppose-everything strategy that Republicans ran against Obamacare starting in 2009.) But once the repeal bill has passed, and the Trump administration has reworked the regulatory landscape, Republicans think they might have a chance to peel off Democratic votes because defending the Obamacare status quo won't be an option any longer.

That's the theory, anyway. But it's a risky one at best.

That's because it requires Republicans in Congress to trust that the Trump administration will swiftly and effectively execute regulatory reforms, which is dicey at best given a) how tricky and exhausting the regulatory process is under normal circumstances and b) the fact that neither Trump nor any of the senior staff seem to have any meaningful health policy priors—or even a basic understanding of how health policy works.

It also amounts to a bet that a handful of Senate Democrats will eventually play along. There is no reason to believe that they will do so. In fact, there is every reason to believe that they won't—just as Republicans did not make any real effort to engage productively with health policy until they were forced to, on the bet that politically it was better to stick to opposition only.

This "three prongs" thing is so pathetic. The proposition is: bet on the efficacy of the Trump admin and a bipartisan deal with Democrats.

More broadly, the multi-stage complexity of the plan is itself a weakness, because it requires every single step to go right. If any one of them doesn't work as intended, the whole thing starts to get wobbly. That's particularly true of the first step, which provides the foundation for everything that comes afterwards.

Just look at what's happening to the expanded movie universe being built out of DC Comics characters: The plan was to create a Marvel movie universe style franchise, with at least half a dozen films scheduled over a multi-year timeline.

But the kickoff entry in the series, last year's Batman v. Superman (Man of Steel was really more of a prologue, like the 2015 reconcilation repeal bill), made enough money to be profitable, but was widely panned by critics, and fell short of expectations at the box office. The follow-up, Suicide Squad, was another box office hit, but the critical reception was even worse. Since then, the franchise has lost directors for several key films, and undergone a senior leadership shakeup.

Now look at what's happened to the GOP's Obamacare repeal bill: Reaction from the right and the left was broadly negative in the days after it was released, and there's enough opposition within the House, mostly from the right, that it is currently unclear if it can pass at all. Even if it does pass in the House, it still faces opposition in the Senate, largely from moderates would prefer a more generous bill. So modifying the bill to make it more amenable to House conservatives is likely to make it even less likely to pass in the Senate.

And this is only the very beginning of GOP's stage one. There's still a Congressional Budget Office score to come, and a potentially difficult negotiation with the Senate parliamentarian, among other challenges.

It's still too early to predict the eventual outcome with great confidence, but the rollout so far has been rocky to say the least. And the chaos so far doesn't exactly bode well for the rest of this policy franchise.