It's time we learn that killing and dying for an ideology-even so-called liberal democracy- is as bad as doing so for a religion. 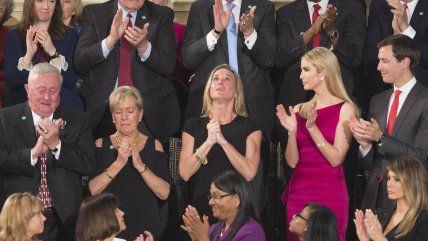 As Donald Trump demonstrated in his first address to Congress, no matter how loathsome a ruler may be, he can bring an assembly of politicians to its feet and disarm some critics simply by invoking the quasi-secular faith—Americanism—and eulogizing the latest uniformed war-state employee to sacrifice his life for it. Trump has indeed shown he can fill the job expected of any president: supreme head of what Andrew Bacevich calls the Church of America the Redeemer.

Horace's declaration "Dulce et Decorum est Pro patria mori"—"It is sweet and proper to die for one's country"—is just what poet Wilfred Owen called it: "The old Lie." Screenwriter Paddy Chayefsky extended Owen's point when he had his protagonist in The Americanization of Emily tell a war widow, "We perpetuate war by exalting its sacrifices." How many times must people fall for this ploy before they realize they have been cruelly scammed? (The American Church is sustained by a coalition of profiteers and true believers or what economist Bruce Yandle generically dubbed "bootleggers and Baptists.")

If we are ever to abolish America's bloody and costly permanent war state we will have to rethink the quasi-secular faith which holds that dying—and killing—for one's country is the greatest honor and virtue to which one one can aspire. It is time we learned that killing and dying for an ideology—even so-called liberal democracy— is as bad as doing so for a religion, even so-called radical Islam. (The distinction between ideology and religion is more apparent than real).

In his speech to Congress, Trump milked the moment for all it was worth when talking about a Navy SEAL who died in a bungled special-ops raid in Yemen in late January. (Did you know the U.S. government conducts ground operations there?) It was the first such operation Trump approved, although it was planned during the Obama administration and Trump has shifted responsibility to the generals.

"We are blessed to be joined tonight by Carryn Owens, the widow of a U.S. Navy Special Operator Senior Chief William 'Ryan' Owens," Trump said before Congress. "Ryan died as he lived: a warrior, and a hero—battling against terrorism and securing our nation…. Ryan's legacy is etched into eternity. Thank you. For as the Bible teaches us, 'There is no greater act of love than to lay down one's life for one's friends.' Ryan laid down his life for his friends, for his country, and for our freedom. And we will never forget Ryan."

Everyone stood and applauded for over two minutes, Trump making no effort to bring the ovation to an end. "Ryan is looking down right now," he said. "You know that. And he is very happy because I think he just broke a record."

That's great. Carryn Owens lost her husband, his three children lost their father, but they'll know that he died for the nation-state and that members of Congress stood for a record length of time.

Trump also said: "I just spoke to our great general [and Defense Secretary James] Mattis, just now, who reconfirmed that—and I quote—'Ryan was a part of a highly successful raid that generated large amounts of vital intelligence that will lead to many more victories in the future against our enemies.'"

Moreover, the special-ops raid in January failed in its mission to capture or kill leaders of al-Qaeda in the Arabian Peninsula (AQAP). As NBC reported: contrary to Trump's claim, "last month's deadly commando raid in Yemen, which cost the lives of a U.S. Navy SEAL and a number of children, has so far yielded no significant intelligence, U.S. officials told NBC News." (A follow-up report found the same. CNN reports otherwise, and it's certainly possible the raid netted intel. But we must also consider that military officials have a motive to lie: to reinforce the faith that Owens did not die in vain.)

The purpose of the raid has been clouded by conflicting statements. NBC says that initially "Pentagon officials called it a 'site exploitation mission' designed to gather intelligence" but later did not dispute Sen. John McCain's description of the mission as intended to eliminate or catch militants. Adding to the confusion is the Pentagon's description of one of the victims, Sheikh Abdel-Raouf al-Dhahab, as an AQAP leader. NBC says "the Yemeni government disagrees."

The Washington Post reported that "Yemeni and tribal officials described a chaotic scene that followed [the raid], saying that tribal leaders, even those without an affiliation with AQAP, took up arms out of loyalty to Dhahab and a desire to protect their village. 'Any person who has dignity and honor would not stand by and watch his neighbors and relatives and tribesmen being attacked and do nothing,' said Saleh Hussein al-Aameri, a tribal leader who was close enough to hear the gunfire." (Emphasis added.)

Apparently you don't have to be a "radical Islamic terrorist" to resent foreign troops storming your village at night.

"Almost everything that could go wrong did," The New York Times reported. "The death of Chief Petty Officer William Owens came after a chain of mishaps and misjudgments that plunged the elite commandos into a ferocious 50-minute firefight that also left three others wounded and a $75 million aircraft deliberately destroyed." Nevertheless, "the Pentagon is drafting such plans to accelerate activities against the Qaeda branch in Yemen."

According to the quasi-secular faith, reckless disregard for human life doesn't matter. All that matters is that a man gave his life carrying out orders issued by the high priests of the American Church in the name of National Security. It is heresy even to wonder if the death was in vain, if the noncombatant deaths constitute war crimes, or if the operation bore any relation to the actual security of the American people. Woe betide anyone who suggests (as some military people have) that such raids create militants and fill the ranks of people who want revenge against Americans for what they allow their government to do.

As expected, the Trump administration deflected criticism by invoking Owens's martyrdom. Trump press secretary Sean Spicer said that anyone "who undermines the success of that raid owes an apology and [does] a disservice to the life of Chief Owens."

Inconveniently, it was Owens's father who admonished Trump not "to hide behind my son's death to prevent an investigation" of the ill-conceived operation. The elder Owens refused to meet the president when the chief petty officer's remains came to Dover Air Force Base. "My conscience wouldn't let me talk to him," the elder Owens, a veteran, said.

That Trump would exploit a grieving widow and invoke the national quasi-secular faith for his own advantage is hardly surprising. Presidents always do this. What's remarkable is that even some of Trump's critics were taken in. For example, Van Jones, who portrays himself as an edgy left radical, gushed over Trump's shameful use of Owens's death. Trump "became president of the United States in that moment, period," Jones said on CNN. "That was one of the most extraordinary moments you have ever seen in American politics."

Hardly. But it shows that a quasi-secular faith can be as powerful as any religious faith.

Contrary to the national faith, the "war on terror" is neither defensive and nor effective: there was no AQAP before the U.S. military invaded Afghanistan and Iraq roughly 15 years ago, and it has been bombing Yemen for years. (Bizarrely, it also helps AQAP by enabling Saudi Arabia's war against AQAP's enemy, the Houthis.) The 9/11 attacks, which provide the official excuse for the permanent war state, were acts of revenge — albeit immorally directed largely at noncombatants—after decades of oppressive and lethal U.S. actions against Arab Muslims. The already small terrorist threat to Americans could be further reduced by adopting a non-interventionist foreign policy.

But any suggestion that the American Church does wrong is systematically marginalized and kept from the public by the mainstream media's defenders of the official faith. As long as that's the case, innocents in other lands will continue to be murdered and Americans like Ryan Owens will continue to die in vain.

This piece originally appeared at The Libertarian Institute.