There's Nothing Wrong With Talking to Russians

Calls for Jeff Sessions' resignation grow from Democrats, but engagement isn't a sin. 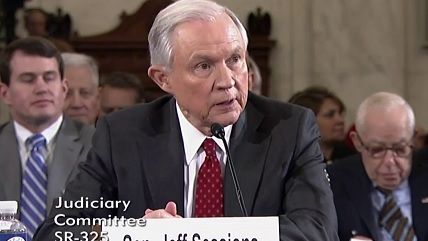 Attorney General Jeff Sessions had at least two conversations with the Russian ambassador to the U.S., Sergei Kislyak, in 2016, The Washington Post reports, something his critics in Congress and elsewhere say contradicts statements made under oath during his confirmation hearing.

In his confirmation hearing, Sessions was asked by Sen. Al Franken (D-Minn.) what he would do if there were any evidence revealed about communications between associates of the Trump campaign and the Russian government. As part of his answer, Sessions offered this denial: "I'm not aware of any of those activities. I have been called a surrogate at a time or two in that campaign and I did not have communications with the Russians."

Later, in a written follow-up from Sen. Patrick Leahy (D-Vt.) asked Sessions whether he had any contact with "anyone connected to any part of the Russian government about the 2016 election." Sessions gave a one-word answer: No. No evidence has been offered that the two conversations Sessions had with the Russian ambassador—one at a Heritage event in Cleveland during the RNC, and one being a conversation with the ambassador in Sessions' senate office (The Washington Post reports this was an in-person conversation, The Wall Street Journal and others that it was over the phone)—were substantively about the 2016 election.

Now that the two conversations with Kislyak have been revealed, Democrats and media are shouting "gotcha." And if there was, in fact, election talk in these meetings, Sessions should recuse himself from any investigations into Russian meddling in U.S. elections. The fact that he's very nearly confessed to being a Trump surrogate is reason enough for some red flags to go up already.

But meetings between U.S. officials and foreign ambassadors, even of countries many insist are "hostile," are par for the course. The U.S. should engage with any country willing to engage, on any issue where there might be convergence. The U.S. and Russia, recent anti-Russia hysteria aside, have complex relations. In the last year, the Russian ambassador to the U.S. met with, among others, the administrator of NASA and the governor of Tennessee (though neither of these appeared to be unforthcoming about their meetings). Last month he was scheduled to attend a physics conference also attended by Los Alamos scientists.

Sen. Claire McCaskill (D-Mo.), for example, went to Twitter to insist she had never met with the Russian ambassador to the U.S., something a few seconds of Googling would uncover as untrue. Kislyak met with McCaskill and other senators in 2013 over international adoptions. After her meeting with Kislyak became widely reported, McCaskill began to dissemble on Twitter, insisting she "never received [a] call or request." Finally, she described the adoption meeting as one which the Russian ambassador "also attended." In fact, the senators met specifically with Kislyak to lobby him for an easing of adoption rules.

This is normal. Senators meet ambassadors and should continue to do so, as such meetings make it more difficult to dehumanize an opponent and for warmongering hysteria to take hold. McCaskill also suggested Armed Services committee members don't generally meet with ambassadors; this was followed by photos circulating on social media of the senator meeting with various ambassadors from around the world. Elected officials should be encouraged to meet and talk to foreign officials, and to visit foreign countries to talk to officials, be they from Canada, Cuba, or Syria. Engagement is a powerful prophylactic to unnecessary hostilities and war.