Baseball Star Jose Abreu Ate His Fake Passport on Flight to the U.S.

The Cuban defector and Chicago White Sox star's bizarre tale is indicative of how ridiculous immigration policy can be. 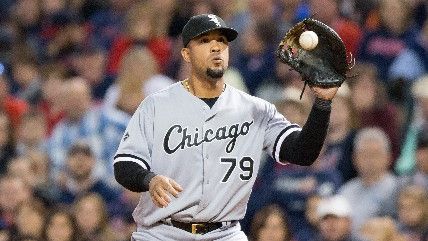 Chicago White Sox first baseman Jose Abreu — a Cuban defector and one of the most dynamic young stars of Major League Baseball (MLB) — testified that on a 2013 Air France flight from Haiti to Miami, he ordered a beer and then "little by little" ate the pages of his fake passport.

Abreu's testimony came as part of an immunity deal he received in exchange for his cooperation with the prosecution in the trial of sports agent Bartolo Hernandez and baseball trainer Julio Estrada, whose trial on charges of conspiracy and alien smuggling continues in a Miami federal courthouse, according to the Associated Press.

Why did Abreu eat his passport? Because under the long-standing "wet foot/dry foot" policy (abandoned by President Obama in the final days of his presidency) which afforded a swift and near-automatic path to legal residency for Cubans who entered the U.S. by land, Abreu was better off having no "papers" than fake papers. "I could not arrive in the United States with a false passport," Abreu testified.

The AP reports Abreu also testified that he obtained the fake passport to ensure he was able to board a U.S.-bound flight from Haiti, after being smuggled by speedboat out of Cuba. Abreu — who says he was paid $20 per month to play baseball in Cuba — took such drastic measures to avoid missing a deadline that would have cost him the $68 million contract he ended up signing with the White Sox. Abreu made the deadline and immediately became a star, winning American League Rookie of the Year honors in 2014.

Abreu also paid his smugglers almost $6 million for their efforts, and according to the AP, even had Estrada serve as best man at his wedding. "These were people who had helped me a lot in getting into this country, so I had a lot of trust in them," Abreu testified in the Miami courthouse, adding, "In my case, I had the ability to perform that charitable work, you might call it."

Bizarre stories like Abreu's passport lunch may end up serving as a time capsule of the last days of "wet foot/dry foot," but even after Obama's attempts at normalizing relations with Raul Castro's government, free and unrestricted travel for Cubans is still prohibited, particularly for Cubans the government would rather keep in service of the motherland — such as doctors and baseball stars. Those high-value Cubans (like most Cubans) will still desire to live free from government repression and earn a better living for themselves than they will ever be able to do as long as the impoverished island is governed by the same corrupt regime that has ruled over the country for almost 60 years.