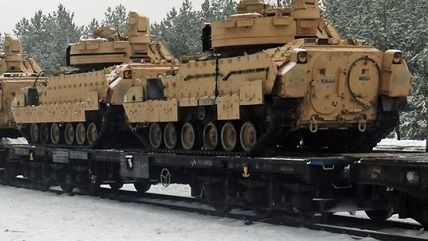 Before running for president, he said Congress' automatic "sequestration" cuts didn't go far enough, that they were "a very small percentage of the cuts that should be made."

Then he ran for office and said he would "make our military so big, so powerful, so strong that nobody—absolutely nobody—is going to mess with us." He promised to provide 50,000 more soldiers, 74 ships and 87 more fighter jets.

This week, he followed through. He proposed increasing military spending by $54 billion per year.

Why did he change his mind?

Even libertarianish Republicans, like Sen. Rand Paul (Ky.), call for increased spending at election time. It's assumed voters like hearing that.

But maybe they don't.

When Americans were asked, "If one additional tax dollar were raised in the U.S., where should that dollar go?" just 12 percent said the military, according to a new poll by the Charles Koch Institute and the Center for the National Interest.

What will the mission of America's bigger military be? I don't know. Trump hasn't clarified that, beyond saying that he will "obliterate ISIS." How? He doesn't say. But he will spend billions more.

This is not good. America is going broke, and our military already spends almost $600 billion dollars. That's more than the next seven nations spend—combined.

I fear Russia, but America spends 10 times more on our military than Russia does. Russia couldn't compete even if it wanted to. What America spends now on the military equals almost half the cost of everything produced by the entire Russian economy.

Trump says the military was "devastated" by President Barack Obama. This is absurd. Democrats spend more on everything. Obama wanted to increase military spending by $35 billion.

He was stopped only by the sequester, that automatic budget-cutting law passed by both parties in Congress in a pathetic admission that no majority of legislators will put their name on spending limits.

The sequester delayed our bankruptcy a little.

But Obama and Congress have mostly done away with it, and now Trump and Congress will reverse what little is left of military sequester cuts.

Bad idea. The military needs cuts just like every other government bureaucracy.

They waste money on administrators, overpriced contractors, and even on those occasions when they want to do the right thing and cut some waste, Congress insists they spend the money anyway.

Even the Democrats aren't immune. Democrats supposedly want fewer wars. They complained about military spending when George W. Bush was president. They jump at any opportunity to oppose Trump, but not this time. Democrats want military money, too.

At least the president, like Paul, and unlike McCain, promises to fund military increases with cuts to other parts of government. But will his proposed cuts of things like NPR funding really be made? All have interest groups ready to bribe congressmen to keep their subsidies.

America's going broke. But the president will not touch entitlements, the biggest threat to our solvency. The $608 billion military is the next biggest.

Trump was right when he said he wanted cuts, not increases. He was right to point out that just five NATO countries meet the minimum spending they promised—two percent of GDP. Germany spends just 1.19 percent.

Why does America subsidize Germany's defense? Campaigning, Trump said that "the U.S. must be prepared to let these countries defend themselves."
Good idea. What happened to that?