Stephanie Slade | From the March 2017 issue 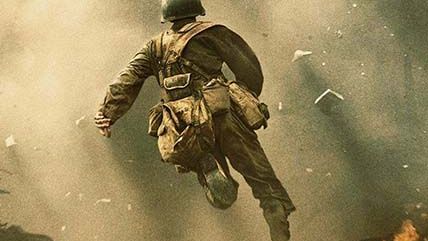 It features grisly, horrifying battlefield carnage shot in high definition, with a lead who refuses to pick up a gun because God says killing is wrong. Yet Hacksaw Ridge is not an anti-war movie.

Andrew Garfield stars as Desmond Doss, the real-life Army medic who became the first conscientious objector to be awarded a Medal of Honor. In the second half of the film, he's shown crawling through muck to save his injured fellow soldiers. One by one, he lowers 75 men down a cliff to safety, enabling his company to fight another day and eventually take the ridge from Japan.

He is, in other words, an integral part of the military machine.

But Doss would not have made it to Okinawa at all if the Army higher-ups had gotten their way. He is bullied and beaten during basic training after he says he won't carry a weapon. Fearing Doss' choices will endanger his brothers in combat, the commanding officer initiates a court-martial against him for refusing to follow orders.

The judge only reluctantly sides with the aspiring medic when a letter from a friendly general reminds everyone that his actions are protected by the First Amendment. The government cannot force him to fire a rifle in contravention of his faith.

Thus, director Mel Gibson offers a libertarian lesson after all: However good the reasons may seem for restraining someone's ability to live out his convictions, respecting the right to make unpopular choices leads to better outcomes for everyone.