When Presidents Drink Their Own Kool-Aid

Trump made insane claims for the power of the executive in his speech tonight. So did Obama. 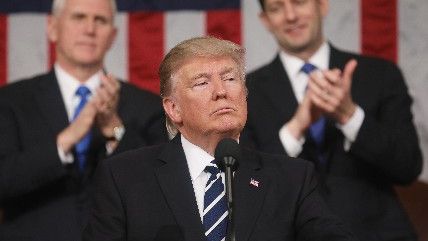 For years, Barack Obama has been (rightly) mocked for these grandiose promises shortly after he secured the Democratic nomination in 2008:

But here's Donald Trump in his address to the joint session of Congress today:

Then, in 2016, the earth shifted beneath our feet. The rebellion started as a quiet protest, spoken by families of all colors and creeds—families who just wanted a fair shot for their children, and a fair hearing for their concerns. But then the quiet voices became a loud chorus—as thousands of citizens now spoke out together, from cities small and large, all across our country. Finally, the chorus became an earthquake—and the people turned out by the tens of millions, and they were all united by one very simple but crucial demand, that America must put its own citizens first. Because only then can we truly make America great again.

Dying industries will come roaring back to life. Heroic veterans will get the care they so desperately need. Our military will be given the resources its brave warriors so richly deserve. Crumbling infrastructure will be replaced with new roads, bridges, tunnels, airports and railways gleaming across our very, very beautiful land. Our terrible drug epidemic will slow down and ultimately stop. And our neglected inner cities will see a rebirth of hope, safety and opportunity.

So here's your handy reminder: Presidents do not make the earth move. They do not turn back tides. They do not heal the sick, or eliminate vice, or remake the nation. They are humans with human failings, and one of those failings is the inability to resist taking a big slup of their own Kool-Aid in moments of triumph.