Silence This VOICE Before it Speaks, Donald Trump!

The president's proposed Victims of Immigration Crime Engagement demonizes people already at the margins of society. 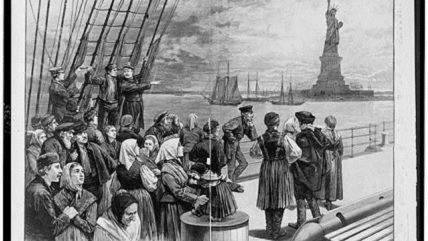 Give it up for President Trump: He delivered a serious speech in a serious tone on serious topics.

The entire speech laid out without apology his vision of a country built around what Steve Bannon calls "economic nationalism"; it's all about building trade barriers, physical walls, and cultural moats between the United States and the rest of the world. How many men will die that Trump is made great? That remains to be seen, but his "historic" increase in defense spending and his oft-repeated commitment to destroying ISIS suggests that he won't be a non-interventionist when it comes to foreign policy.

The most memorable moment in his speech to me came when, after demonizing immigrants (especially illegal ones), he announced his plan for what he called VOICE:

I have ordered the Department of Homeland Security to create an office to serve American Victims. The office is called Voice — Victims of Immigration Crime Engagement. We are providing a voice to those who have been ignored by our media and silenced by special interests.

There are so many mendacious falsehoods embedded in this it is hard to know where to start. Trump lives in an apocalyptic America, where the streets run red with the blood of the innocent. You'd hardly know from listening to him that crime rates—for violent crime and property crime—remain historically low (even after recent upticks). In addition to the non-crime wave is the fact that immigrants are less likely than native-born Americans to commit crimes. As a recent study (written up at Reason by Ronald Bailey) puts it:

…immigrants are less likely to commit serious crimes or be behind bars than the native-born, and high rates of immigration are associated with lower rates of violent crime and property crime.

Those aren't alternative facts—that's just reality. Contrary to the fever dreams of nativists such as Trump, very few migrants, whether here legally or not, move to America to embark on a life of crime. Because their status is tentative, it makes all the sense in the world that they will stick to the straight and narrow.

Are people who have been victimized by immigrants "silenced by the special interests" or ignored by the media? It's difficult even to grasp what Trump might be talking about, but the nightly news rarely misses an opportunity to showcase crimes, especially murders or lethal accidents, committed by immigrants (especially illegal ones). Yet such coverage masks not just the reality that immigrants are less prone to crime than natives but also that so-called Sanctuary Cities, in which police only inquire about a person's legal status when given a warrant by immmigration agents, are safer than comparably sized cities. San Francisco, for instance, is safer than Columbus and Indianapolis. This too makes sense: Most crime is a local matter and the main reason that police in a given city push for "sanctuary" rules is because otherwise immigrants won't come forward to report crime or give information.

People who move to America for work or to find freedom aren't in any way a problem. They pay taxes, do jobs Americans won't do, and are barred from virtually all forms of means-tested transfer payments (this is especially true of illegal immigrants); the only tax-financed stuff they get is K-12 education for their kids (who are often citizens) and emergency medical care. Those are costs and should be dealt with. But low-skilled immigrants don't displace native workers to a significant degree or lower their wages, either. More important, they exemplify the spirit of a country that likes to call itself a Shining City on a Hill, a beacon of hope, opportunity, and promise for all the world to see. This is the reason why 80 percent of Americans, including a majority of Trump supporters, want to give even illegals a path to citizenship.

Scapegoating immigrants via new federal agencies, crackdowns at checkpoints, and halving the number allowed in is not simply at odds with how most of us feel, it's rooted in a wilful denial of basic facts about crime, unemployment, and other issues. That's no way to usher in a "new chapter of American greatness."