Trump has destroyed the GOP's advantage on economics. 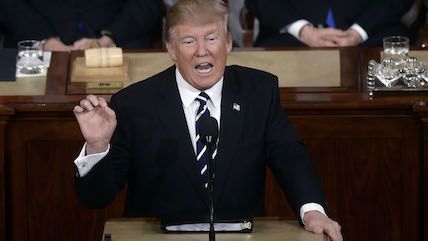 When I was a college student at the University of Michigan (a mere 10 years ago), fair trade was a talking point deployed by leftists who hated capitalism and free markets. Today, fair trade is the official position of the Republican president.

"I believe strongly in free trade but it also has to be FAIR TRADE," said President Trump in his remarks to a special joint session of Congress Tuesday night.

His remarks stressed one key theme above all others: the U.S. must enact a form of robust economic protectionism that is directly at odds with everything the Republican Party supposedly believed for the last 40 years.

"Currently, when we ship products out of America, many other countries make us pay very high tariffs and taxes, but when foreign companies ship their products into America, we charge them almost nothing," said Trump—signaling that he would like to even the playing field.

Trump cited President Lincoln, not in service of racial harmony, or civil rights, or even national unity, but on trade.

"The first Republican President, Abraham Lincoln, warned that the 'abandonment of the protective policy by the American Government [will] produce want and ruin among our people,'" said Trump. "Lincoln was right—and it is time we heeded his words. I am not going to let America and its great companies and workers, be taken advantage of anymore."

Lincoln had a lot of virtues, but his economic policy wasn't one of them.

I love Abraham Lincoln, but he really knew nothing about trade

Trump vowed to punish companies who try to move jobs overseas (or prevent them from doing so outright). Such a policy would not help American workers. When government prevents businesses from making decisions that benefit them, it drives up the cost of goods—and workers, like the rest of us, are ultimately consumers.

This is Economics 101. It also used to be Republican Policy 101. For decades, the GOP was the party of Milton Friedman. Now it's just the party of Donald Trump—a man whose economic views would have been warmly embraced by the University of Michigan's self-described socialists circa 2007.