The president talks nonsense about refugees, immigrants, and crime. 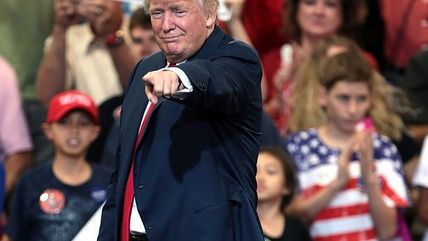 Is it really safe for you to return to Sweden, asked an American friend, jokingly, when I prepared to check out from my hotel in Washington, D.C. President Donald Trump had just warned his audience in Melbourne, Florida, about Muslim immigrants and terrorism in Europe. "You look at what happened last night in Sweden" the president yelled, "Sweden! Who would believe this!"

Swedes took to social media to speculate about which awful event he referred to. An aged pop star had technical problems during rehearsal for a popular music contest, observed someone. Another Swede tweeted that out of respect for the families of victims we should not speculate about the terrible event until after it actually occurs. #lastnightinsweden quickly became a meme.

This short segment was so full of distortions that it could be used as exhibit A for Trump's claim that the media peddles fake news. A Swedish policeman who was interviewed for the documentary claimed that Horowitz edited the footage to make it seem like he answered other questions, making it seem like the officer warned about refugees when the officer did not. The officer referred to Horowitz as "a madman."

According to Ami Horowitz, "it was not long ago that the first Islamist terrorist attack occurred in the country." In fact, the only known attempt was in December 2010, more than six years ago (and no one was harmed but the attacker).

But Trump's defenders have countered by arguing that violent crime has risen dramatically in Sweden since the surge of refugees began arriving in 2014. Swedish crime, you see, is not about Swedish crime any more. It's about the risk posed by Muslims and refugees.

But if crime is rising dramatically, that phenomenon would not just be picked up by Fox News and Breitbart, but also by crime statistics. So what does the data say?

Yes, immigrants to Sweden do commit more crimes than people born in Sweden, in contrast to countries like the United States, where immigrants commit less crime than the native-born. That's partly because refugees to Sweden are much poorer and less educated, and because they have a much harder time finding a job. The Swedish economy has been liberalized over the last two decades, but we've made exceptions for the labor market, which still makes it difficult to work and easy to claim welfare.

There has also been an increase in organized crime in recent years. In a country with harsh drug laws, gangs fight over who gets to sell cannabis in specific territories. Large-scale immigration has contributed since new entrants want a piece of the pie.

And yet the data fail to record the incredible surge in violence that Trump's defenders talk about. The homicide rate is almost exactly what it was a decade ago, despite the gang wars. The latest Swedish Crime Survey, from the Swedish Council for Crime Prevention, shows that the population exposed to assault has declined by 0.7 percentage point in the last 10 years, and offenses against the person in general "is approximately the same level as in 2005″—almost a decade before the surge of refugees.

But isn't Sweden the rape capital of the world, as members of the alt-right constantly point out? Sure, Sweden has more registered sex offenses than other countries. But the willingness to report such crimes differs dramatically between countries. A culture where you talk openly about such crimes, and don't blame the victims, will also have more cases reported. Sweden has made a conscious effort to get women to report any offense, whereas countries like Saudi Arabia and Mozambique do everything to stop women from reporting. (They have almost no offenses. Fabulous!)

Sweden differs from other countries in two more ways. The definition of rape has been extended to include sexual abuse not considered rape in other countries. In the year that change was made the number of rape offenses increased by 66 percent!

This is the reason why some people claim that Julian Assange is being investigated for rape by Swedish authorities for "almost nothing." Ironically, this is often heard from the same groups who claim that Sweden is the world's rape capital.

And unlike in other countries, if a husband rapes his wife every day during the last year, this is filed as 365 separate cases in Sweden, not as one case, as in most countries (or zero, as in Saudi Arabia) to make the crime more visible in statistics and in the debate.

Was it safe to return to Sweden? I scrolled through the statistics on my phone when I prepared to check out from my U.S. hotel. Last year there were 135 homicides in Washington D.C., population 670,000. That's 30 more than in the whole of Sweden, population 10 million.

Johan Norberg is a senior fellow at the Cato Institute and author of the forthcoming book Open: The Story of Human Progress.