"I'm just going to give a free commercial here: go buy it today, everybody. You can find it online," Conway said, possibly violating federal ethics laws. 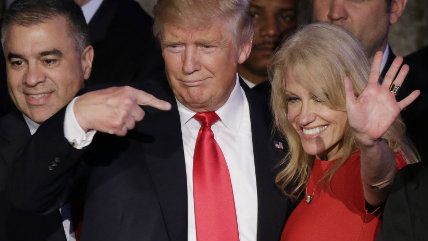 Kellyanne Conway, a senior adviser to President Donald Trump, played the role of TV saleswoman during an appearance Thursday morning on Fox News, and may have broken federal ethics laws in the process.

Asked by the hosts of Fox And Friends to comment on the recent spat between the president and Nordstrom's—the department store decided this week to stop carrying Ivanka Trump's line of women's apparel because of declining sales, prompting a series of angry tweet from Ivanka's father—Conway did her best impression of a QVC host.

"Go buy Ivanka's stuff, is what I would tell you," Conway said. "It's a wonderful line. I own some of it."

As the host of the show attempted to interrupt her, Conway continued her pitch.

"I'm just going to give a free commercial here: go buy it today, everybody. You can find it online," she said.

Federal ethics laws prohibit public employees from using their positions "for the endorsement of any product, service or enterprise, or for the private gain of friends, relatives, or persons with whom the employee is affiliated in a nongovernment capacity." On the face of it, Conway seems to have violated that law. She's a senior adviser to the president and when she speaks to the media, as she was doing Tuesday from the White House's briefing room, she is doing so with the weight of the presidency behind her words. Singing the praises of Ivanka's fashion line might not count as an endorsement, but the flat-out instruction to "go buy it today, everybody," is pretty clearly an attempt to influence the market for the private gain of a friend.

"It is wholly unacceptable—no ifs, ands, or butts about it," Rep. Jason Chaffetz (R-Utah), chairman of the House Oversight Committee, told NBC News on Thursday when asked about Conway's comments. Rep. Elijah Cummings (D-Maryland) the Democratic chairman of the same committee, sent a letter to Chaffetz on Thursday calling the incident "a textbook violation of government ethics laws and regulations enacted to prevent the abuse of an employee's government position."

Citizens for Responsibility and Ethics in Washington, a D.C.-based good government nonprofit, filed a complaint with the Office of Government Ethics and White House Counsel's Office over Conway's decision to hawk Ivanka's products on-air.

Whether or not Conway faces any repercussions for her comments, the ethical issues at play here go well beyond the strict legal question of whether a law was broken.

This is, once again, evidence that the Trump administration has no qualms about using the office of the presidency for the personal enrichment of Donald Trump and his offspring. It's an almost cartoonish example of the government—of the president himself, and his staff—literally picking winners and losers.

From his deal-making with Carrier to his cajoling of American car companies doing manufacturing overseas, Trump has spent a good deal of time over the past three months attempting to mix business and politics in a more personal way than any president has before—or should.

"[Trump's] actions will almost certainly lead to more cronyism than we have now," warns David Henderson in the cover story of the most recent edition of Reason. "And it has disturbing implications both for our economic well-being and for our freedom."

Trump's willingness to engage in overt crony capitalism is worrisome enough when he's threatening trade embargoes or calling down the wrath of his Twitter followers on companies that get on his bad side. This week, things got worse. When Nordstrom's announced that it would stop carrying Ivanka's fashion line, the president immediately got involved.

My daughter Ivanka has been treated so unfairly by @Nordstrom. She is a great person—always pushing me to do the right thing! Terrible!

Ethics laws that apply to members of Congress, executive officials, and White House employees like Conway don't cover the president, who is forbidden from accepting gifts from leaders of foreign nations but is otherwise left to make his own determinations about conflicts of interest.

That legal loophole, Jonathan Chait notes, allows Trump "to engage in wildly kleptocratic behavior without any legal consequences." When Conway does the same thing, as she did on Thursday, it's not merely unethical but possibly illegal.

Strong enforcement of those ethic rules might be the only thing that keeps Trump's kleptomaniac tendencies from spreading to the rest of his White House team. Congress should use this situation to make it clear there will be no tolerance for this behavior.

Still, there appears to be no line Trump is unwilling to cross, and that's a bigger problem with no easy solution--and little reason to think Trump will change.

"This is just another example of what looks like a disturbing pattern of this administration acting to benefit the businesses of the president's family and supporters," said Noah Bookbinder, executive director of Citizens for Responsibility and Ethics in Washington. "Americans are unfortunately at the point where they have to question who the Trump administration is looking out for, the American people or the Trump family."

UPDATE: Chaffetz and Cummings just sent this letter to the U.S. Office of Government Ethics, asking its director, Walter Shaub, to review Conway's statements and report his findings to the House Committee on Oversight and Government Reform.