The Law Is an Ass, but this Georgia Sheriff Who Arrested His Ex-Wife Is a Total Asshole

Claimed she and another women defamed him by calling him "POS" on Facebook. 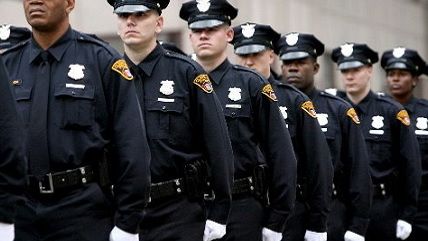 Via Ken White of Popehat comes a dispiriting but important story of the wide gulf between how freedom is supposed to work and how, depending on the local situation, power operates with near-impunity. Anne King of Washington County, Georgia complained that her ex-husband wouldn't help her out by picking up some medicine for their sick kids. A friend of King's, Susan Hines, replied via Facebook that she'd pick up the meds and drop them off in King's mailbox. She also referred to the ex-husband as "POS," which is short for "piece of shit."

As it happens, explains White,

Captain Corey King of the Washington County Sheriff's Department. And when it comes to American law enforcement, your right to free speech is more theoretical than actual.

In her federal lawsuit, Anne King contends that her husband, a friend in the Sheriff's Department, and a county "magistrate" put her in jail for her Facebook comment. According to her, Captain King filed a police report with his friend, Washington County Sheriff's Investigator Trey Burgamy. Washington County magistrate Ralph O. Todd — who is not a lawyer, and who ran unopposed last year — issued a warrant requiring Anne King and Susan Hines (who had responded on Facebook by suggesting Captain King is a "POS") to appear at a hearing. After a hearing at which Captain King was the only witness, Magistrate Todd caused a warrant to issue charging Anne King with criminal defamation: "SUBJECT DID, WITHOUT A PRIVILEGE TO DO SO AND WITH INTENT TO DEFAME ANOTHER, COMMUNICATE FALSE MATTER WHICH TENDS TO EXPOSE ONE WHO IS ALIVE TO HATRED, CONTEMPT, OR RIDICULE, AND WHICH TENDS TO PROVOKE A BREACH OF THE PEACE, SPECIFICALLY, SUBJECT DID MAKE DEROGATORY AND DEGRADING COMMENTS DIRECTLY AT AND ABOUT COREY KING, FOR THE PURPOSE OF PROVIDING A BREACH OF THE PEACE. Anne King also contends that Magistrate Todd threatened to "ban her from Facebook."

Anne King's story has a vaguely happy ending. After being arrested and booked and semi-charged (they really didn't break any laws, you see), she and Hines were released and in a subsequent hearing, everything was dismissed.

Anne King has sued Captain King, Investigator Burgamy, and Washington County for civil rights violations and various state torts. She can't sue "Magistrate" Ralph Todd because, despite the fact he's not a lawyer, he's cloaked by absolute judicial immunity. The statements above are merely her contentions. Moreover, the law governing suing state actors in federal court is complex, and the defendants will have many defenses to liability.

Anne King's story is not, by any stretch of the imagination, a rare one. Particularly with the rise of social media, law enforcement officers across the country have been abusing the legal system to retaliate against insults: from the police supporting Jim Ardis' petty and petulant revenge in Peoria, the Renton PD investigated satirical videos, and the Parma PD prosecuted a man through trial for a satirical account.

Anne King has First Amendment rights, in theory. Their nature and extent are well defined by the courts. It's straightforward to respect them. But what does it mean to say she has those rights? In Washington County, Georgia — population approximately 21,000 — with a hostile ex-husband a Captain of the Sheriff's Department, and with Ralph Todd as a magistrate, does she really have them in any meaningful way? What is a right, when the state defies it?

Ken White, who has done some legal work for Reason as well as writing for us, is a former prosecutor who is now a defense attorney. Read his "Confessions of an Ex-Prosecutor" if you want to trim your nose hairs without using clippers. He knows the legal system inside and out, from both sides, and he is especially strong on how apparently iron-clad rights somehow dissolve into rust depending on very specific local situations. The story of Anne King is, on its own, a disturbing abuse of power that reveals much of how the real world operates. That her story is not, as White puts it, "a rare one," makes it even more troubling and worth noting. There are all sorts of power differentials that override protections and one of the main interests of libertarians should be to uncover, publicize, and minimize such situations to the smallest number possible.