Justin Amash: 'We cannot prevent every terrorist attack…we have to at some point trust some people.' 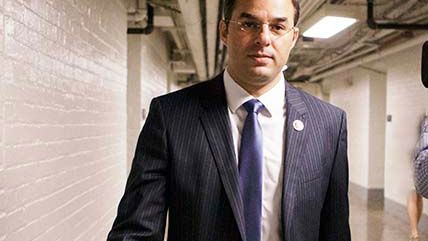 Rep. Justin Amash (R-Mich.) is widely considered to be the most consistently libertarian member of Congress. He is also the son of a Syrian immigrant and a Palestinian refugee. So it didn't exactly come as a surprise when Amash became one of the first Republican politicians to criticize President Donald Trump's refugee/immigration executive order of one week ago.

But Amash is also unsatisfied with America's existing process for screening potentially dangerous refugees from Syria and other unstable, terrorist-producing countries. In an interview with me one year ago, the congressman said, "I went to one of these briefings put on by the administration, and was frankly stunned at the poor vetting process. It is a long process, but contrary to what I at first believed, it is not a very rigorous process. The important thing to me at the end of the day is making sure that we can identify who the person is when they're coming over."

I spoke with Amash again for SiriusXM Insight on Wednesday, at a time when it seemed (to me anyway) that the EO's controversial provisions affecting green-card holders who live in the U.S. had been reversed. Since then the State Department has disclosed that 60,000 visas have been revoked as a result of the order, though if this week is any guide, the reporting on that could soon change a great deal. The bottom line, according to the congressman, is that this policy trend won't change until Republican attitudes change, and that doesn't seem immediately likely: "Right now we are going through a period where we are sort of closing up a little bit."

The following is an edited transcript of our conversation; at the bottom of it you can listen to the first three minutes:

Amash: Well, I wouldn't call that one resolved….

Amash: I've talked to some of my colleagues in the House Freedom Caucus to send the word back up to the administration: They're letting green-card holders in on a case-by-case basis but they are going to receive additional screening and all the rest. And it's my opinion, and certainly the opinion of a lot of people in Congress, including a lot of Republicans, that people who have been living here for a long time, who are lawful permanent residents?these are legal immigrants who live among us, who serve in our armed forces, who pay taxes?they shouldn't be treated like they are some kind of suspect every time they want to come back into the country.

Reason: As far as you know, are they being pulled aside for questioning routinely at airports still, even after the clarification from the Department of Homeland Security on Sunday?

I think that's not the way to handle people who have been living here as lawful permanent residents and are well-vetted. We cannot prevent every terrorist attack that is going to happen in the world, and we have to at some point trust some people. And I think the people who live here and serve in our armed forces, we are going to have to trust. That's just how the world has to work, and life has to work.

Reason: And just for people who aren't really aware of how the green card process works, there is vetting—you have to get fingerprinted and you have to go to some interviews.

Reason: You have to say that you're not allegiant to a foreign totalitarian system of thought.

There's no perfect way to stop everything, so we do our best to look at the people who we might be most concerned about, but certainly I wouldn't put lawful permanent residents up there at the top of the list, just like I wouldn't put citizens up there. We wouldn't want to subject citizens to additional harassment every time they go someplace—although we do see that with TSA, obviously—but we wouldn't want to do that just for the sake of saying, "Okay, well, some of these citizens might be bad." Sure, some American citizens might also want to do us harm, but that's just not the way you operate in a free country.

Reason: Let's talk about other aspects of the order. What is wrong from your lights of the seven-country, temporary—though we don't know when it's going to stop and we've heard some indications that it might not stop after the 90 days are up—but temporary ban on all non-diplomatic travelers emanating from those seven countries? What is wrong with that?

Amash: Well, you are going to affect a lot of schools, and there are students who come here from other countries who want to learn the American way and go back and actually help improve their countries. But then when you also look at the seven countries, these aren't the seven countries that have provided the greatest threat to the United States over the past couple decades. We're missing big names, like Saudi Arabia, Pakistan, Afghanistan. And so I think that the list, which was, yes, drawn up during the Obama administration for totally different purposes—not for the same purposes, for different purposes—is mostly a political list. It is more of a political list than it is a safety list, and if we are worried about the safety of our citizens here then we should be looking at countries like Saudi Arabia and Pakistan, where a lot of the radicalism arises.

Reason: Now I interviewed you about a year ago in your office and we talked about this issue, because they had just passed through the latest omnibus these adjustments to the Visa Waiver program that affected dual nationals from those countries. And at the time you said to me that the refugee screening process of people from Syria…really needs to be improved. Can you talk about that briefly?

Amash: Well, the reason I say it needs to be improved is because I've been in classified meetings, and I know that some of our highest level officials, including the FBI Director, do not believe that the screening process is adequate, and they are unwilling to certify that people coming into the United States are screened effectively; are safe, in other words. So as long as you have the heads of these agencies—and this is under the Obama administration—saying that they are unwilling to certify, unwilling to assure us that they've been properly screened, I think there is more work to do. Now what all that work is, I don't know. I don't know all the details of the screening process and how we can improve it. But certainly these officials who are in charge of it should come up with better ways so they can feel confident.

Reason: So what's next for Congress right now having to do with the executive order. What are you cooking up, what are your colleagues cooking up, if anything, to respond [to], alter or adjust this in any way?

Amash: Well, we will look at various things; I think some of my Democratic colleagues have already dropped some legislation, and I'll certainly be reviewing all of that legislation. But at the end of the day I don't think that you are going to get any changes to this executive order until a sizeable number of Republicans, particularly Republicans at home, change their minds about it. And right now it doesn't seem that way. I think most Republicans at home applaud the order for one reason or another.

Of course Trump said that this is something he was going to do, and there is a lot of misinformation out there; everyone is conflating things. People say it is just like what President Obama did, when it is nothing like what President Obama did. Or that President Obama cut off…the Iraqi refugees for six months, when that's nothing like cutting off legal immigrants or student visas, as has been done under this executive order, so it is comparing apples to oranges. Until Republicans really understand what's going on and are concerned about it, it's probably not going to change.

Reason: Donald Trump has said that he wants the new target of the total number of refugees in this country to be reduced from this year's 110,000 to 50,000 going forward. The target for the 15 years prior to this year had been 70 or 80,000, and we are living at a time when the global refugee population has gone from around 10 and a half million to 16 plus in a very short period of time, three or four years. What is your sense of what this says about America's traditional role as being the magnet for and great shock absorber for worldwide refugees?

Amash: Well I think culturally right now we are going through a period where we are sort of closing up a little bit. I mean, you have a lot of nationalism in sort of what brought Trump to power, and as a result you have a country right now that says, "Hey let's close our borders, let's close off trade, let's really just look at our own people and not worry about being that shining beacon to the rest of the world."

No one is calling for making the United States a part of some kind of global government. We don't want the U.N. telling us what to do, we don't want global government. But at the same time we have to be open to a conversation with the world, bringing people here, letting them see how great it is to have a free system, so that we can have a better world, so we can have better relations with other parts of the world. Everyone prospers when there is freedom across the world. We don't want to do it militarily like George W. Bush did and like Obama did, but let's make sure that we are open and willing to speak and converse with other countries.