Censorship wins again-and so does Milo. 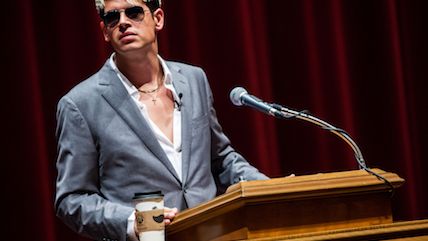 Berkeley is burning tonight: the university campus that birthed the Free Speech Movement played host to a despicable display of violence and censorship Wednesday evening that culminated in the cancellation of a planned speech by controversial Breitbart tech editor Milo Yiannopoulos.

Anti-Yiannopoulos protesters wearing black scarves over their faces hurled fireworks at the building where he was supposed to speak. They also tore down barricades and smashed windows. They used gasoline to start a significant fire on the street that threatened to engulf a nearby tree, and forced police to push people back. Authority figures deployed rubber bullets and tear gas in an attempt to control the situation. A student who attended the event told me that it seemed like the majority of the violent protesters were not students, but older, masked rioters from the "antifa" movement.

"This is what tolerance looks like at UC Berkeley," said Mike Wright, a member of the Berkeley College Republican group that invited Yiannopoulos to speak. Shortly after he made this statement, smoke bombs were set off around him, and someone threw red paint at him, according to The San Francisco Chronicle.

I have been evacuated from the UC Berkeley campus after violent left-wing protestors tore down barricades, lit fires, threw rocks and Roman candles at the windows and breached the ground floor of the building. My team and I are safe. But the event has been cancelled. I'll let you know more when the facts become clear. One thing we do know for sure: the Left is absolutely terrified of free speech and will do literally anything to shut it down.

As I write this, at 10:00 p.m., the violence and chaos are ongoing. Yiannopoulos was forced to evacuate the campus.

Anti-Yiannopoulos protesters described themselves as anti-fascists and anarchists. "We reject fascist America," the said.

They don't so much reject it as enable it. Most people will watch the chaos unfold and wonder what's wrong with college students and social justice activists these days—why they must resort to violence and destruction to silence people they don't like.

By engaging in such tactics, anti-Yiannopoulos protesters effectively distract from the fact that Yiannopoulos's own views are loathsome. They turn Yiannopoulos into a free speech martyr, which is exactly what he wants. When Milo is censored, Milo wins.

"It was a 500 person event, that's like the max occupancy of the room," Kevin Quigley, a freshmen at UC-Berkeley, told me over the phone. "if it was just 500 people going to hear him talk it wouldn't be in the news, but when you have thousands of people gatheing in the streets… they're just making him more famous."

By the way, Yiannopoulos's old Breitbart boss, Steve Bannon, is now a top advisor to President Trump. I wonder whether Bannon would rather Yiannopoulos's speech go off without a hitch, or be shut down by violent protesters? Which outcome is better for the law-and-order policy positions of the Trump administration? It's not actually a question: the president's narrative is obviously better served when irate students resort to violence to silence an alt-right speaker.

This is what happens when an unreasonable force meets an irreverent object https://t.co/SjHQVbGSD7