Trump's immigration order is cruel, counterproductive, and punishes immigrants (and their families) who have followed the rules and don't pose a threat. 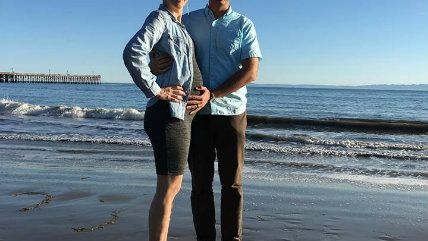 To understand just how cruel and counterproductive Donald Trump's executive order restricting immigration is, consider the story of Soheil Kolouri.

At age 22, he came to the United States from Iran to work on a graduate degree at Carnegie Mellon University in Pittsburgh.

While there, he met Jessi Day, an American from Colorado. The two fell in love, were married in 2012, and are now expecting their first child in May.

In 2015, after Kolouri finished his doctorate in biomedical engineering, the couple relocated to the Los Angeles area, where he is now working as a research scientist, helping to develop cutting edge artificial intelligence technology.

Kolouri's story is the quintessential tale of successful immigration to the United States. Yes, the jobs have changed—good luck explaining artificial intelligence research to a 19th century Irish immigrant—as have the countries of origin. But the essential story remains the same: for centuries, immigrants have come to the United States seeking to improve their lives by learning here, working here, and raising families here, and in the process improving the country for everyone.

President Donald Trump is altering that story—for the worse.

His executive order banning Muslim immigrants and visitors from seven countries in the Middle East and Africa not only shuts the door to future students who want to follow in Kolouri's footsteps, it also punishes immigrants who are already here, and who have done everything right.

With his wife expecting their first child in May, Kolouri was making preparations for a visit from his mother, Shahin Atlasbaf.

"The thought of finally meeting her daughter-in-law and her grandson gives my mother joy beyond words," Kolouri wrote in a Facebook post over the weekend. "She squeals with excitement while saying the most endearing words in Farsi to Jessi and our baby."

Atlasbaf is 66, lives in Iran, and was widowed three years ago when Kolouri's father died unexpectedly. She was in the process of obtaining a non-immigrant visitor visa, and was planning to stay for about a month to visit and help the new parents with their newborn infant, Jessi Kolouri told me in an interview on Monday. Atlasbaf had an appointment in May for a visa interview at the U.S. embassy in Dubai—because there is no American embassy in Iran—and was "counting down the days until her arrival."

Trump's executive order changed all that. Atlasbaf received a notification on Saturday that her visa interview had been cancelled because of the new policy on immigration.

"Per U.S. Presidential Executive Order signed on January 27, 2017, visa issuance to aliens from the countries of Iraq, Iran, Libya, Somalia, Sudan, Syria and Yemen has been suspended effective immediately until further notification," it said. "Your upcoming VISA appointment was canceled in compliance with these new directives."

"Now I am deeply struggling to find words to explain to her why she is disallowed to see her grandson," wrote Soheil Kolouri.

Trump's immigration policy deems a 66-year-old grandmother to be such a threat to the safety of the United States that she doesn't even have the chance to look immigration officials in the eye and assure them that she's not a terrorist. It's a policy that will keep her from being able to visit her son and daughter-in-law, and may even keep her from ever looking at her grandchild.

Alex Nowrasteh, an immigration policy analyst for the Cato Institute, compiled a list of all foreign-born people who committed or were convicted of attempting to commit a terrorist attack on U.S. soil from 1975 through 2015. The list includes 154 individuals who succeeded in killing 3,024 Americans (the vast majority of which were killed in the September 11, 2011, attacks).

Only 17 of those 154 terrorists hailed from the seven countries covered by Trump's immigration ban. Attacks planned or carried out by those 17 individuals killed exactly zero Americans.

"The first sentence of his order states that it is to 'protect the American people from terrorist attacks by foreign nationals admitted to the United States,'" Nowrasteh notes. "However, the countries that Trump chose to temporarily ban are not serious terrorism risks."

The Kolouris are hardly the only immigrants facing this sort of situation in the wake of Trump's executive order. But their story highlights the two major problems with the new administration's haphazard and ham-handed policy on Muslim immigration.

In a widely shared piece published at Lawfare Blog, Benjamin Wittes, a senior fellow at the Brookings Institution, argued over the weekend that Trump's executive order on immigration is "both wildly over-inclusive and wildly under-inclusive."

"On the over-inclusive side," Wittes wrote, "it will prevent untold numbers of people about whom there is no whiff of suspicion from coming here as students, as professionals, as tourists. It overtly treats members of a particular religion differently from other people."

That includes people like Atlasbaf, a sexagenarian soon-to-be-grandmother who wouldn't be considered a threat by any reasonable person.

On the other side, though, the executive order falls well short of identifying people who may be more likely to be actual threats, Wittes says, because it does not apply to immigrants from Pakistan, Saudi Arabia, Egypt, or several other countries that have a history of exporting terrorism to the United States.

"There is, in fact, simply no rational relationship between cutting off visits from the particular countries that Trump targets (Muslim countries that don't happen to be close U.S. allies) and any expected counterterrorism goods," he concludes.

The State Department, in a memo issued Monday, said Trump's travel ban might hurt counter-terrorism efforts by souring diplomatic relations between the United States and countries targeted by the new policy.

The ban "will not achieve its stated aim of to protect the American people from terrorist attacks by foreign nationals admitted to the United States," the draft memo notes, CNN reported Monday. "Given the near-absence of terror attacks committed in recent years by Syrian, Iraqi, Irani, Libyan, Somalia, Sudanese, and Yemeni citizens who are in the US after entering on a visa, this ban will have little practical effect in improving public safety."

The inept and seemingly vicious implementation of the new immigration policy has cost Trump both practical and political resources that could have been put to better sure. People who likely would have agreed with and defended a more restrictive immigration policy, had it been developed and implemented in a more deliberate fashion, are left with little choice but to oppose it.

If Trump had set an effective date, briefed the DHS, exempted those in transit, and excluded green card holders, he'd have been fine.

There are plenty of us who would have defended a targeted, smart, legally-sound EO. Trump didn't even let OLC approve? We can't defend that

Trump didn't do any of those things. The result is a legally dubious policy that seems to violate federal law prohibiting immigration policies that discriminate against certain nationalities. It may well be dismantled in court over the next few weeks—a process that already has begun with a series of court orders issued over the weekend suspending the order—unless the Trump administration makes some changes and attempts to save face. So far, there is little indication that the administration will shift its approach.

Sean Spicer, Trump's press secretary, on Monday attempted to justify the travel ban by pointing out that hundreds of thousands of travelers moved through American airports over the weekend without trouble.

"On Saturday, 109 people out of 329,000 were slowed down," Spicer told reporters at his daily media briefing. "I think this is being blown out of proportion."

Setting aside the obvious logical fallacy at play here—that it's okay to violate federal law and court order as long as only a small minority of people are harmed by that action—there's no doubt that the consequences of Trump's travel ban go far beyond the few hundred people who were detained over the weekend, as the Kolouris' story shows.

Shahin Atlasbaf will not be able to get a visa and won't get to visit her grandchild. The Kolouris are not sure whether they will be able to visit Soheil's relatives in Iran, either.

As an Iranian citizen, he would be able to go back anytime he wanted, but his wife and future child might not be allowed to come with him (in response to Trump's immigration order, the Iranian government on Saturday closed its borders to Americans).

There's also concern about whether Kolouri would be able to get back into the United States. He has a green card and is considered a lawful permanent resident, but it's so far unclear whether the White House's order would apply to him as well—some green card holders reportedly were detained over the weekend before being released.

Soheil believes that Trump's immigration policy "only fuels the fire of hatred in our nation and in the world."

"I would like to remind you," Soheil wrote to Trump in an open letter posted to his Facebook page, "that immigrants like myself are the bricks and mortar of our society, educational system, and economy."